What it was like to sit in a room with Paul Rudd and Evangeline Lilly was amazing!  They are fantastic in the movie together, but I wasn’t prepared for how great they would be together in real life .  Throughout the interview they were setting each other up for responses and feeding off the other’s energy.  It was a wonderful experience for everyone.  We truly felt like we were sitting in on a great conversation between friends more-so than an interview. 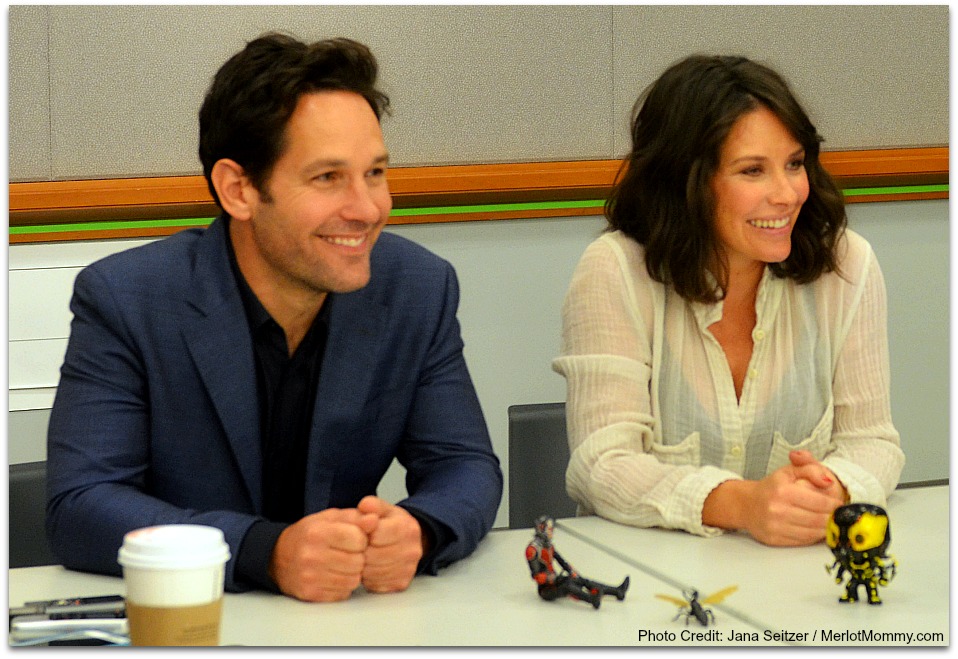 Ant-Man is changing the shape of Marvel and bringing us a film that we can all relate to.   It’s all about relationships: relationships with parents, children, ants, and broken homes. Even if you aren’t a Marvel fan, chances are, after seeing Ant-Man you will become one because you can relate to this film in some way.

I like this idea that we’re dealing with all of this craziness with a suit that shrinks you down, controlling ants (and all this kind of stuff), and yet this constant thing with parents and children, whether it’s with Michael, or my daughter and me, and Corey and Michael, that this is the stuff that makes this movie more… ~ Paul Rudd 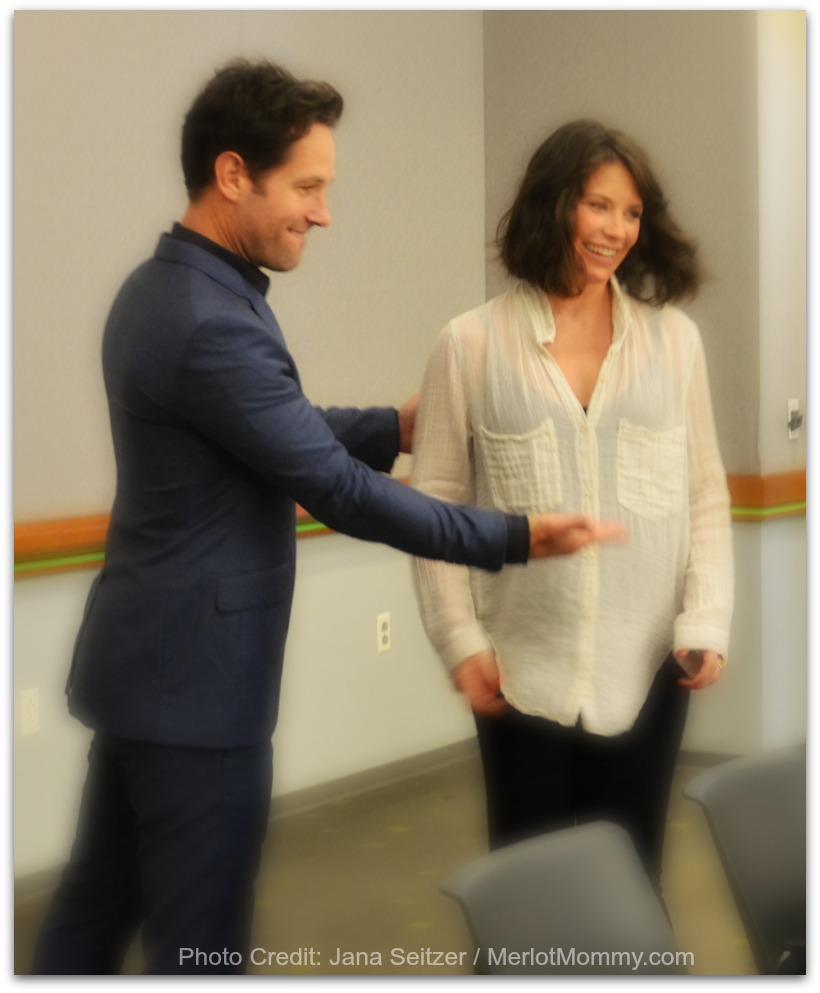 Another aspect we can all relate to is being strong as a mom.  When Evangeline Lily was asked about the role of Hope and if she thought the writers gave her enough “Girl Power”, she told us that “girl power” wasn’t what she wanted showcased for her.

The question asked “Evangeline, you worked with Paul and Adam with writing, in order to develop your character, do you feel like that it came out what you wanted as far as the girl power part of it?”

And her answer is one that will make women everywhere want to stand up and clap! (I loved it and wished I could have.)

You know, it’s funny because actually the girl power part was not really my contribution. That was Marvel and the boys who– I mean what guy doesn’t like a girl who can kick ass? They like to see that on screen, right?

What I think is important is that woman, first of all be a woman and not a girl, and that she also have all the dimensions that a male character who can kick ass would also have. And I think a lot of the times what happens, mistakenly in men’s very, very meaningful attempts to make strong women, is they make them strong in the way that they relate to, which is wrong.  And I think that female strength, has many more dimensions than that. I think a lot of our strength comes from our women’s vulnerability, our compassion, our maternal instincts, and I don’t think that those things should ever be labeled as weaknesses. And I think that’s one of the things that I always look to put in, and infuse, these characters. The moments where you suddenly realize underneath that very hard facade, underneath what she’s trying to project to the world, because she feels she has to survive or she has to do what she needs to do, is a little girl within all of us- and even within Paul, there’s just a little girl… 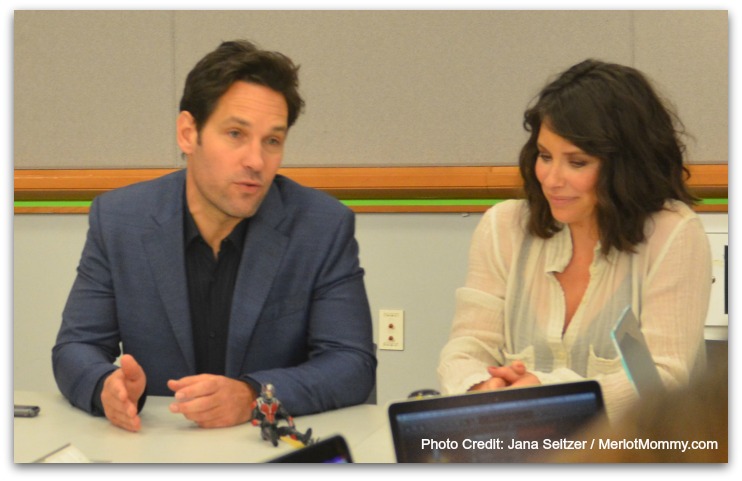 What Mom Does Reviews readers wanted to know!

Evangeline, how FUN was it to punch [Paul Rudd] all the action scenes?

I loved the take that they kept in the film, because you never know what they’re going to use, and what’s going to end up on the cutting room floor; one of his improvs was when he said “were you aiming for the face– or were you going for the hand?” I was so glad that it ended up in there ’cause I love that line.

Paul, you are very well known for your comedy, how is it different? what’s it like going into action?

I always felt like, especially with Marvel movies, but just talking about this one, that it was going to be funny. [Marvel] is good with levity. I mean, all their films have funny moments but they’re not necessarily straight up comedies…

What’s your most memorable moment?

I had a moment– when I was doing a scene, a very intense emotional scene, with Michael Douglas where… that made me suddenly sit up and take notice and go, oh my God. I’d better bring it. I’m working with Michael Douglas and he’s a living legend and, and that was, an honor. ~ Evangeline Lilly

I remember the first time walking onto the set in the suit — the first time putting it on when we were shooting. And to go from the tent (because there was a tent that I went into and had a small pit crew helping me get into it) walk on set, and the camera department and everyone stopped and saw Ant Man for the first time was totally exciting. And I’ll always remember that. ~ Paul Rudd 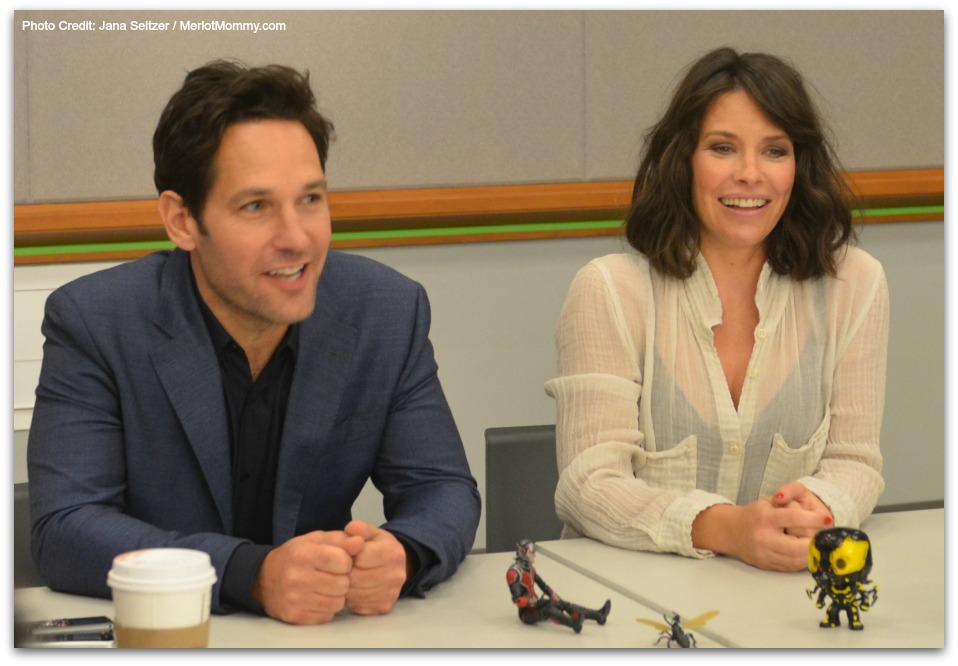 What I wanted to know..

I was only able to sneak in one question for Paul and Evangeline – I had more than a dozen from our readers and my own thoughts, but what did I ask…

“Paul, what is your favorite Ant?”

As you can guess, during the film you are going to learn more about ants than one may realize (you always learn from a Marvel movie- especially when they need to develop back story).  And you will also realize that ants ARE really cool, I mean, what’s not cool about having the strength of one?  Just that alone is awe-inspiring for my five year-old.  So I asked… “Paul, what is your favorite ant?” and he graciously responded:

I have a very personal relationship with Ant-ony, which was something that we put in the film.  I think even giving him the name Ant-ony came around later, and I thought like “oh, could it be Anton?”  It was even almost said early on when we were working on the script before we started shooting, like maybe if we give him a number?  Anthony– just playing around. Let’s call him Ant-ony! – and then it stuck.  And, you know, that idea that you can have a personal attachment to ants that you can see this film, especially kids, and really like say “oh my God, ants are amazing” and, and that one in particular, you develop a real fondness for Ant-ony, my favorite.

Are Ant-Man and Ant-ony – the characters to watch? 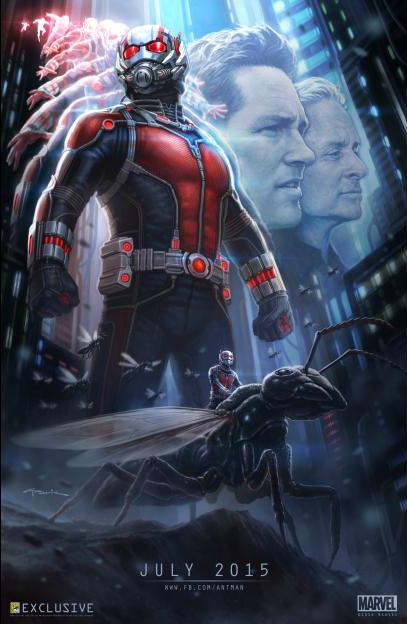