Don’t miss the Series Premier of “The Toy Box!”

Yes, “The Toy Box” was one of my favorite parts of my trip to San Francisco!  My son and I love to watch these competition/reality shows and we love humor.  My first thought was “WOW, Justin will love this show!”  I am making him wait until the premier tonight at 8p est to watch it.

The show is so much fun to watch.   In each episode of “The Toy Box,” inventors present their toy concepts to a group of mentors that include Dylan’s Candy Bar owner Dylan Lauren, toy guru Jim Silver and Pixar creative director of Consumer Products, Jen Tan. If the toy maker gets past the mentors, they will move on to The Toy Box where a panel of young, no-holds-barred judges that include Sophia Grace Brownlee (“The Ellen Degeneres Show”), Aalyrah Caldwell (“Uncle Buck”), Toby Grey (“The Unexpected John Cena Prank”) and Noah Ritter (“The Ellen Degeneres Show”) decide which toy moves on to the finals and eventually crowned the winner. That winning toy will be sold exclusively at Toys“R”Us® after the series finale.

A MULTICULTURAL SINGING DOLL, WACKY WORM, PARTY CANNON AND MORE COMPETE FOR A SHOT AT THE GRAND PRIZE, ON THE SERIES PREMIERE OF
ABC’S ‘THE TOY BOX’ 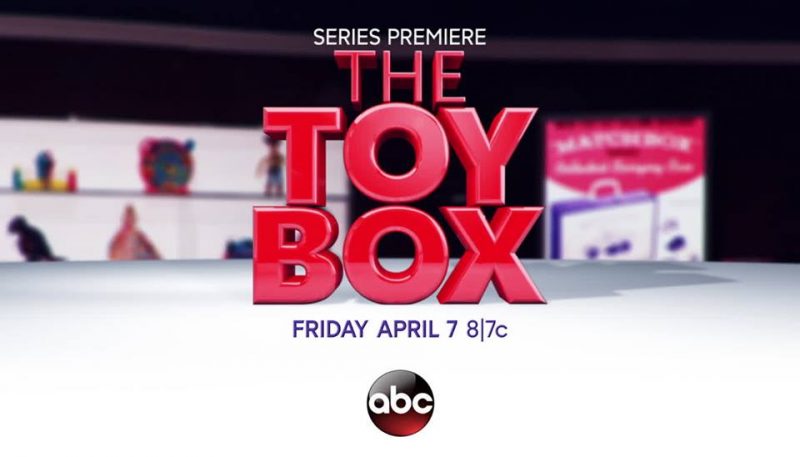 In the first show we will meet some fun and creative toy inventors with their wacky toys: 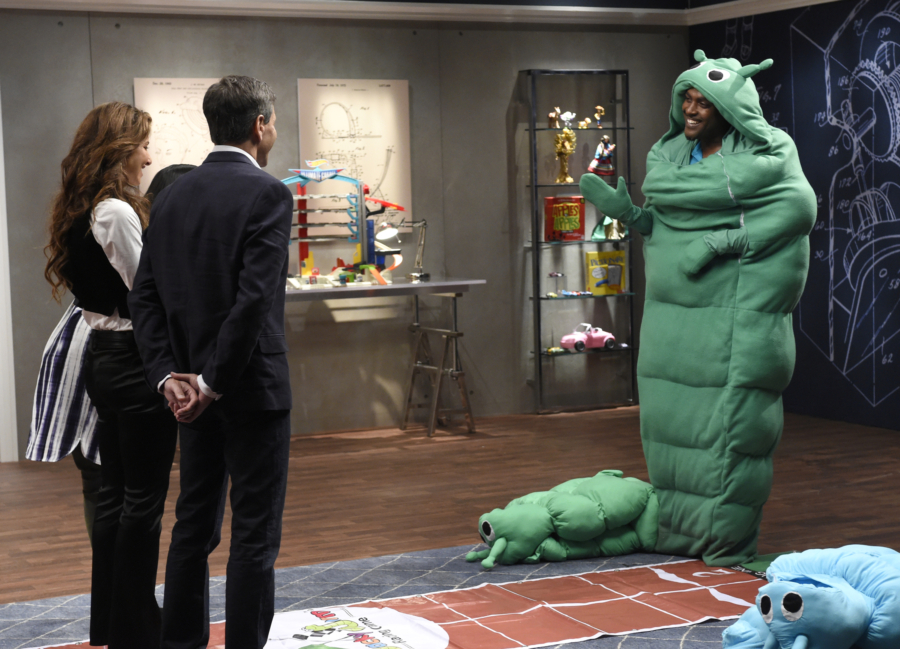 All the toys and inventors were fun and amazing, but I LOVED Darla’s passion for her invention – the Niya Doll the most!

Let me walk you through how the show works with Darla and her Niya Doll! 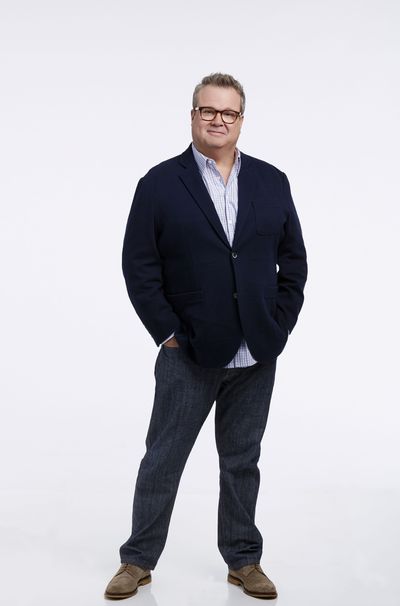 First she meets Eric Stonestreet From ‘Modern Family’- he is the host of the show and adds some great comic relief for the nervous inventors’ first part of their journey- meeting the mentors. 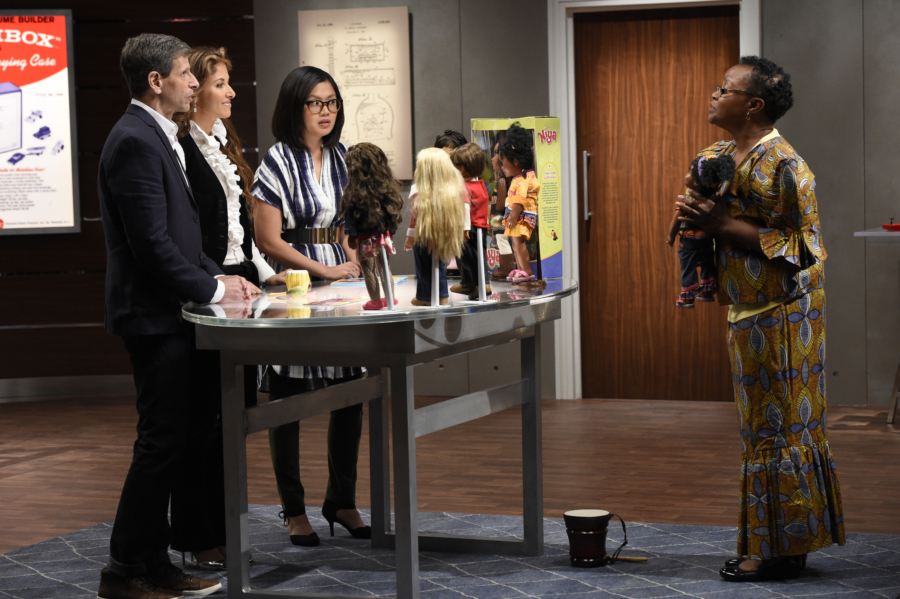 The Mentors listen to Darla’s pitch about her Niya Doll.  They give feedback and will recommend (or not recommend) her toy for the Toy Box. 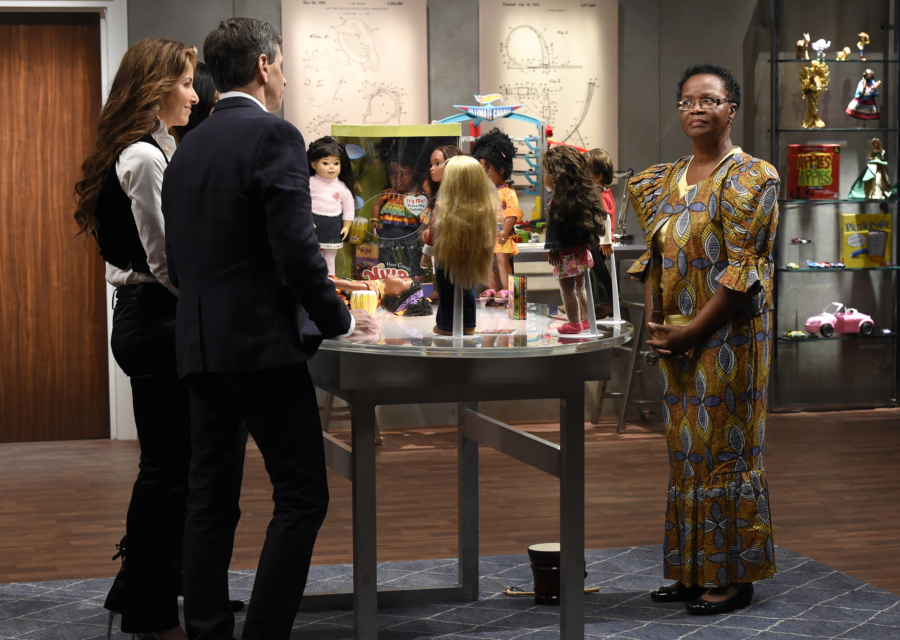 Next- the JUDGES! Darla has to convince the TOUGHEST Judge of all- THE KIDS- that her Niya Doll deserves to win.  The Judges play with the Niya Doll, ask questions and give Darla their unfiltered feedback. 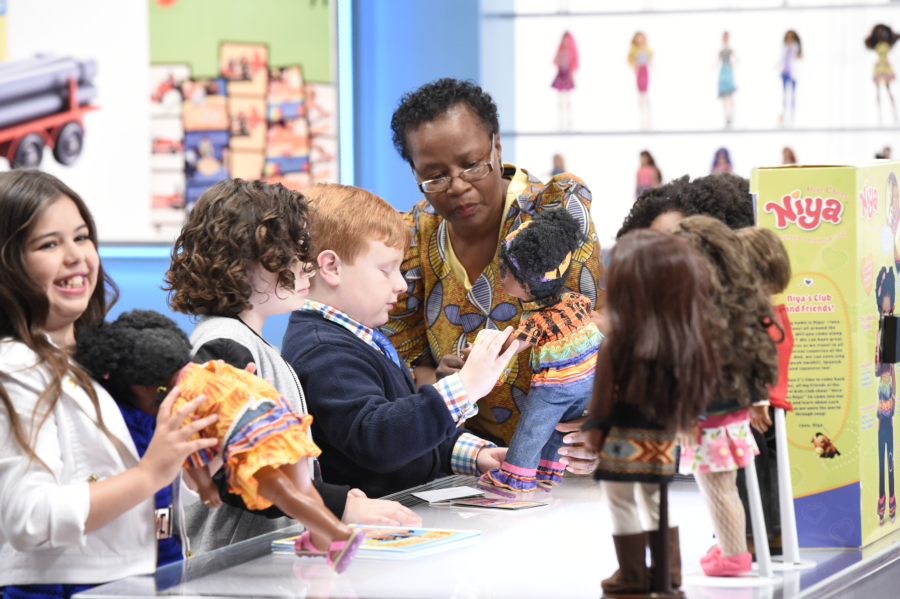 At the end of the show, one of the inventors will be chosen to compete in the last episode for the grand prize: The Winning Toy will Be Made by Mattel and Sold Exclusively at Toys“R”Us® After Series Finale!

You have to watch TONIGHT on ABC at 8p est to find out which toy WINS!

Guess what we got to do?  We met Jen Tan, the Pixar creative director of Consumer Products, and asked her some questions about the show! 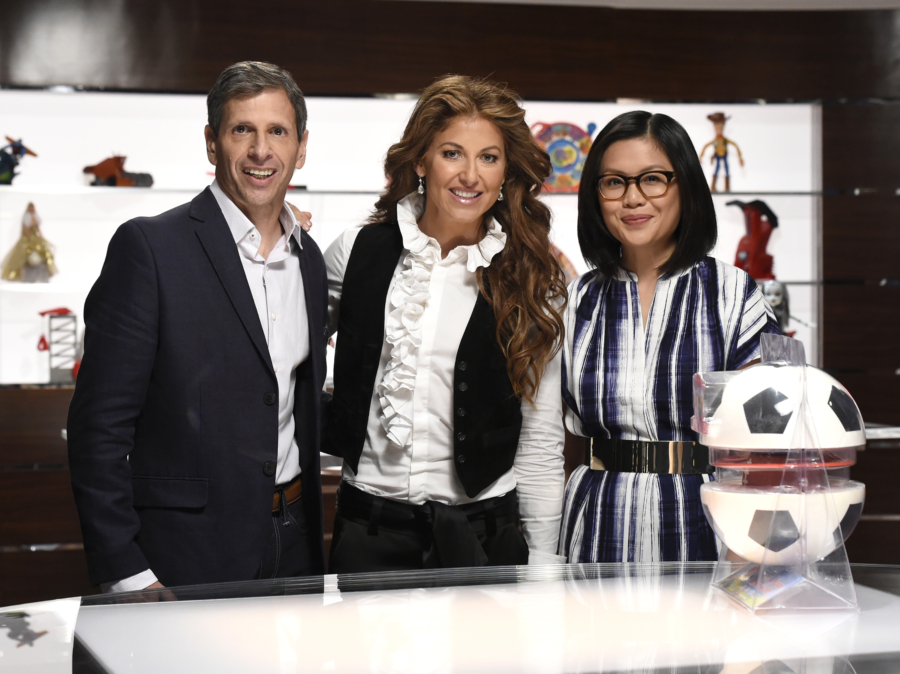 Jen was delightful and insightful and, like all the other Pixar people we met, she LOVES her job!

My first question was: “Who picks the kids?”  They were so funny- I had a hard time deciding which one was my favorite!

Jen replied: “I wasn’t involved in the picking of the kids. But, they picked some really great kids. I think ABC was involved in that. And yes, they are on every episode.” 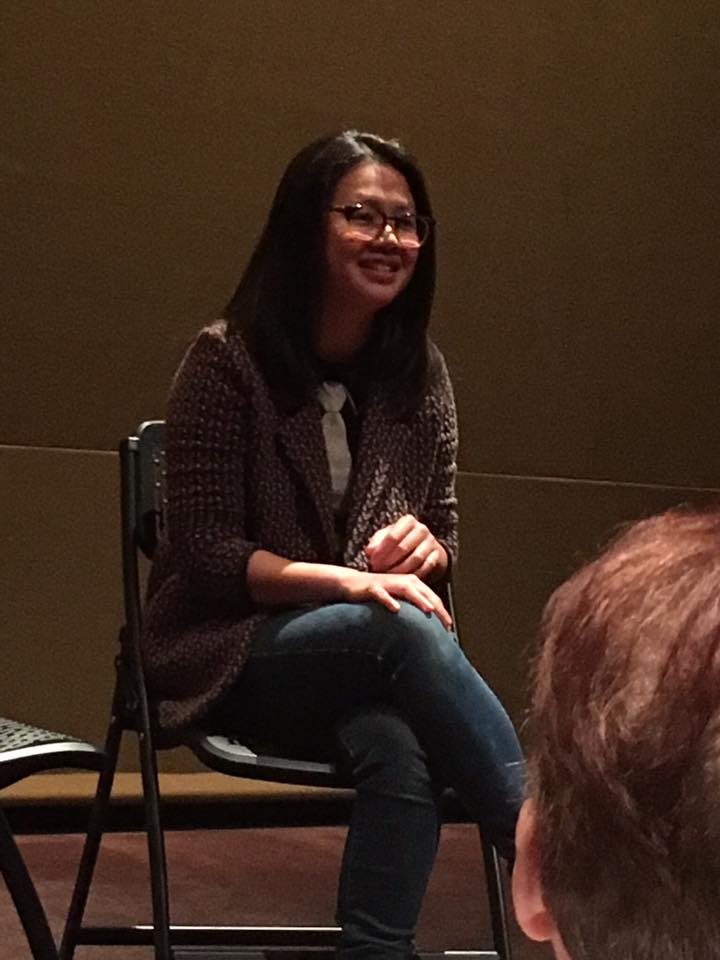 She was also asked: “What do you look at in the toy? Everything is about the story, right? The toys need to relate to a child, right? But what additional elements do you actually evaluate when you take a look at the toy?”

Jen replied: “There’s a lot of different things, in a really good toy. And it’s hard because as an adult, sometimes you forget what it’s like being a kid. And how to play – which is why I love this show. But I always look for something that is not a one trick pony. So you can play with it multiple times and there are various ways to play with it. You know, I have a 2-year-old now and it’s really important that whatever I give her,  she can play with it for a good amount of time.  Anything that sparks some creativity and imagination, that’s what I personally look for.” 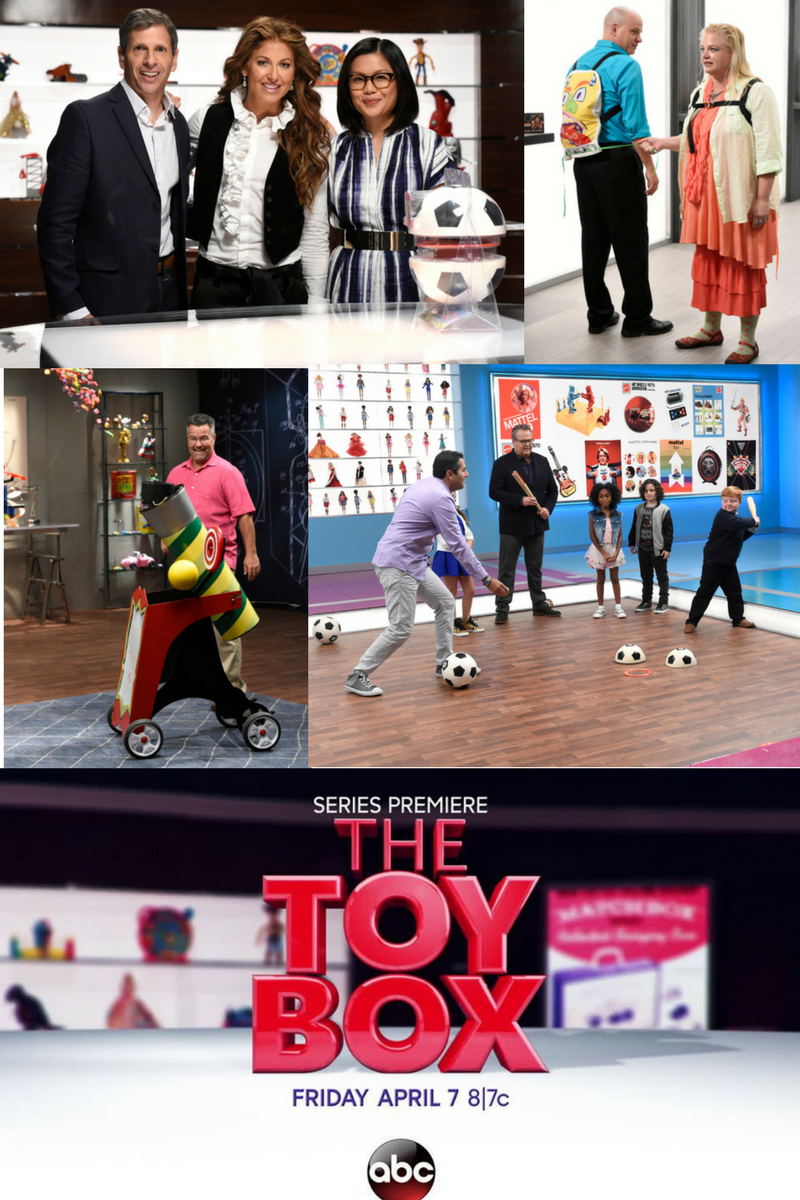 Another great question: “Did you have a background in toys before you came to Pixar?”

Jen replied:  “Yes. I went to school for toy design, actually. I went to FIT, Fashion Institute of Technology. They have a two year toy design program. And it’s very specific. I think there’s only two or three new programs in the country. So I started off as a toy designer. Then I got a job at Disney Consumer Products, right out of school. Then I worked at Spin Master for a little bit, and worked on some actual toy designs and I came here (to Pixar) to work on more toys.”

I don’t want to share too much- that would spoil the fun!

Here are a few clips about two of my favorite judges:

I can’t wait to hear how YOU like the show!  Be sure to leave a comment below and tell me which toy or inventor or judge or mentor you liked the best!

Find out if the JUDGES will choose CANDY over balls or dolls! 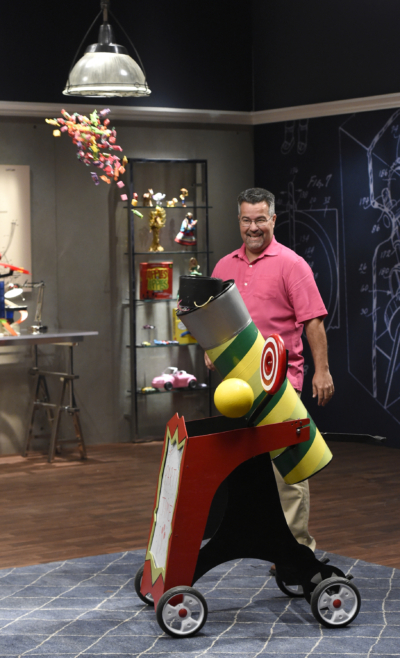 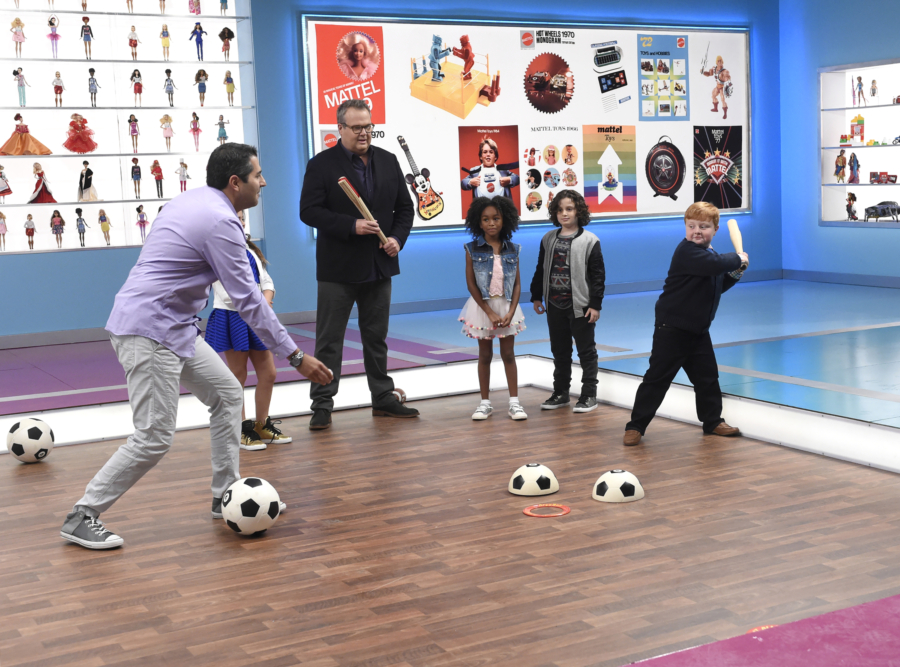 Stay connected to The Toy Box on Social Media: