My ten year-old loves the library and she maxes out our library limit during each visit.  We proudly read 100 picture books a week to her before she switched to chapter books. Each fluent reader in our home was reading a book to her several times a day, she couldn’t get enough of them.   My biggest struggle was that I didn’t always have 15-30 minutes to sit with her for a full story several times a day – this didn’t make her happy.   I really could have used StorySnacker for those moments when she wanted a story but I didn’t have enough time available for it.  Nobody wants to tell their child they can’t read to them – you WANT to read to your child anytime they are willing to sit for it – this is where StorySnacker comes in.

Snacking: a new approach to stories. StorySnacker is the idea for a mobile app designed to help squeeze in more chances for time-crunched parents (aka: all parents) to read stories to their kids each day. It will serve as a single source for multiple stories, each one made to take just a minute, available whenever, wherever.

There are two storytelling approaches being brought in for StorySnacker.  Award-winning children’s book author Erik Slangerup has taken the following techniques and combined them with the use of technology into an app.

The first technique is often used by radio hosts to keep a segment within 1 minute.  This is a strict 160 words for each story as 160 words can be easily read at a normal pace within 60-seconds.

The second, approach is like the story that is told with an easel.  Do you remember sitting as a child for a story with an illustration slowly drawn out on an easel?  This is a technique that is often used by children’s librarians to keep the children engaged for the entire story during story time.  While they are listening to the story, they are also curious about the picture being drawn.  Instead of being distracted by turning the page, the page itself changes as the story goes on. The goal is to have the picture on the easel completed by the end of the story.

Slangerup, who has written traditional books like Dirt Boy and Monsterlicious, has mixed feelings about how technology has impacted storytelling, but embraces new media: “Our phones can be constant interruptions to family time, but they aren’t going anywhere. So why not make them a force for good?” Slangerup adds: “With an app like StorySnacker, our phones actually have the power to turn a spare minute into a magic moment. As a dad, that makes me hopeful.” 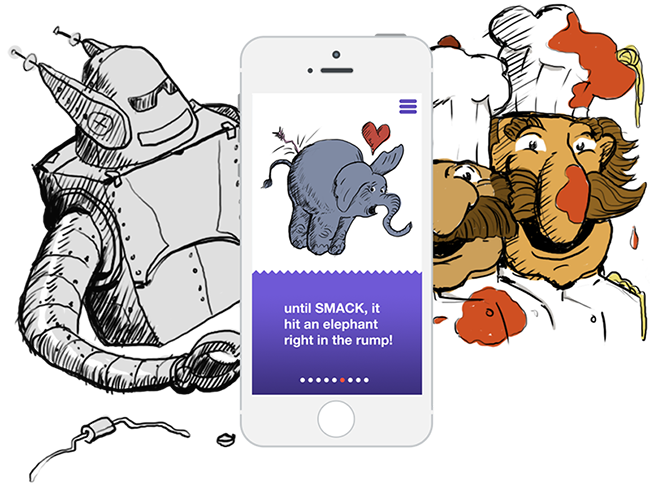 I am loving the StorySnacker app because my son with SPD will NOT sit for a story regardless of the setting BUT I was able to sneak a StorySnacker into his day.   Today we read the Pizza Pirate together – the ENTIRE STORY!  I don’t believe he has ever had an entire story read to him at one time before- ever!  (He is five.)    Traditional books and book apps require him to turn the page. Two pages into a story he is usually gone or creating his own fun by pressing buttons he isn’t supposed to.  StorySnacker will maintain the same illustration at the top – keeping his attention throughout the entire story!

I also showed my son several of the illustration demos to see if they could keep him engaged.  Each illustration is done in Photoshop with a Wacom tablet, recorded using Screenflow, then edited down to a minute. There’s a little still time on the front and back of each animation, but the build is just 60 seconds. The final frame is designed to reveal something important about how each story concludes.  See them HERE.

StorySnacker launched a 40-day campaign on the popular fundraising site Kickstarter, and quickly reached 25% of its goal in the first 3 days. Many backers are taking advantage of the offer to access “unlimited stories” for just a $15 pledge.  This is the same pledge that I made as well.  I am very excited to receive our unlimited access to StorySnacker!  After trying out the methods StorySnacker will use with my son I am confident that it is going to be a wonderful app for us to use everyday during every spare minute we have.

Please visit StorySnacker on Kickstarter for more information and demos of what the StorySnacker app will become.  I encourage you to make a pledge of whatever you can to make sure this app becomes a reality.