There are many ways to improve the value of your home, the esteemed Phil Spencer has written heaps on it, but one of the most common home improvements you’ll hear with regard to adding value is having a new kitchen. 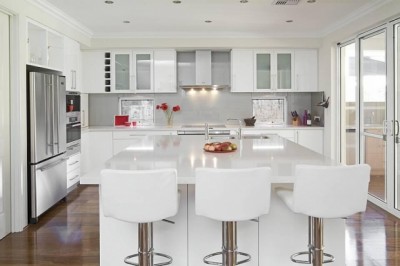 Kitchens can be a very costly home improvement, it’s only reasonable to expect the value of your home to go up with the purchase of a new kitchen – at least by the value of the kitchen. Part of the reason people always choose the kitchen, is because it’s where you’ll spend a lot of time, it’s also considered the home’s showpiece.  We don’t just cook in the kitchen,  we do paperwork in it, flick through the TV channels, take phone calls, have gatherings and just about anything else you can imagine.

When potential house buyers come knocking, the kitchen is hopefully something that you can show off. The problem is finding a good balance between boosting the value of your house to how much you should spend on a kitchen. New kitchens can typically add 6.4% to a home’s value, but only as a workable cost to value added ratio. If you buy a £25,000 kitchen for a £200,000 house, you won’t then sell that house for £235,000. It’s also possible to drag the value of a home down by installing a poorly fitted, cheap kitchen. As a general rule, you should spend 3.5% of the home’s value on a kitchen.

If buying a new kitchen is out of the question, there are other neat ways to improve the appearance of your kitchen. You don’t actually have to refit an entirely new kitchen at all; you could actually refit some of the kitchen yourself by fitting new kitchen cupboard doors for example.

Carrying out a bit of DIY takes away a lot of personal time, but it also takes away a lot of the cost implications. With this in mind it is possible realise the same gains in house value at a fraction of the cost. If you take the DIY route you have to consider all the costs involved and carefully detail this out, because if you don’t it is highly likely you’ll start adding on bolt ons. Also, there is that very human thing of trading up, so when you have decided on a budget you can start the process but halfway through decide you actually want the range cooker. You may decide to use granite counter tops instead of a durable veneer of granite effect. You can set out with the intention to save money but actually end up spending a lot more on your kitchen than if you had just stuck with a pre-specified shop bought fitted kitchen.

One last option is second hand kitchens. Believe it or not you can actually purchase high quality secondhand kitchens at a very cut down price. What you get is a decent kitchen with slight signs of wear and tear, but with a little TLC and elbow grease you can certainly bring it up to scratch.

Sadiah Agah is a keen DIY enthusiast of 15 years from South East England who regularly writes about DIY. He also writes on behalf of commercial organisations as a way of engaging with the community. This article was written on behalf of Doors Sincerely You can connect with Sadiqah on twitter here.