They tend to say that a pearl is a girls’ best friend, and if you ask any girl about one, you’d probably receive some positive responses. Pearls make great accents to just about any piece of jewelry and can do wonders for a wardrobe.

If you’re thinking about buying a piece of jewelry that has a pearl, you’re going to quickly find out that many types are out there that you should familiarize yourself with. To clear up any confusion, let’s take a look at the various pearls you can find on the market: 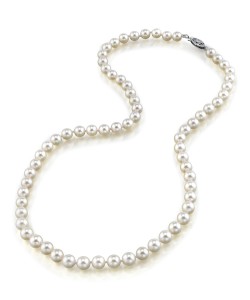 Akoya pearls are round, white and have a hint of yellow that glows. Considered to the best most popular and finest pearl in the world, these pearls are named after the Japanese word for the “Pinctada Fucata” oyster. Most of these pearls are cultured in Japan and the sizes range from two to 10 millimeters.

Cultured pearls are created with an oyster that cannot expel a pearl. When this process happens, the oyster will create a substance known as “nacre.” This substance will coat the material of the shell until a smooth pearl is formed. When the pearl is cultured, this will mean that the pearl was taken out while the oyster was alive, implanted in an irritant in a lab and re-planted back into the sea to continue to live while creating a full pearl.

Freshwater mussels, which used to be known as a “rice krispy,” was a pearl that was shaped similar to the cereal. While a freshwater pearl is small, they are known to offer a great color, luster and a lot of depth.

Found in the tropical waters near Tahiti, these pearls are larger than the Akoya pearls mentioned above and can average anywhere from eight to 20 millimeters in size. Unlike most pearls that have a silver or cream color, these pearls come in a natural black, purplish, greenish or bluish color.

According to National Pearl, the South Sea pearls can be found in the warmer waters in Australia, Philippines, Indonesia and Myanmar. These pearls can come in a silver, white, cream or golden color, and the bulk of these pearls range between 10 and 14 millimeters in size. Compared to most other oysters, these oysters are much larger and extremely hard to find, making them one of the most expensive types of pearls on the market.