Some trends disappear as fast as they arrive. The skirt-over-trousers for example. Hugely popular with schoolgirls everywhere for a glorious six weeks in the mid-nineties. Crocs were another. Luckily for everyone all over the world, those weird rubber clogs have pretty much died a death. But one such fashion craze doesn’t appear to be going anywhere. Yes, ladies and gentlemen, I am referring to the ‘onesie’.

Essentially, a romper suit for adults, onesies have simply gained popularity, despite many writing them off as the latest fad. People were blogging about them as far back as five years ago, full of expectation that they would disappear into the depths of the fashion graveyard. However, pre-Christmas sales in 2012 were thought to be up 600 per cent, showing this trend is only going one way: up. 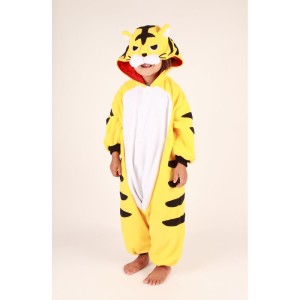 Some of the most high-profile celebs in the world have been spotted rocking a onesie, sending fans to the shops in their thousands. Brad Pitt went for a comfy little black all-in-one and Kate Moss accessorised hers with some heels and a waistbelt. And I’m talking out in public. While the average Joe might stick to just lounging around the house, the celebs are parading theirs around for everyone to see. As soon as we see our idol wearing something, we all want it; cue the frenzied buying and stock selling out everywhere.

While the onesie was supposedly designed to be exclusively for loungewear, it is now very much an acceptable choice of attire both around the house and in the supermarket. Simple designs are a thing of the past, with people now embracing the trend with open arms. Animal onesies have actually spawned a trend of their own in the form of Kigu. This trademark brand is essentially, a onesie that looks like an animal outfit. Complete with ears, tails, pouches, horns, eyes and all manner of other animal-related paraphernalia, these all-in-ones are popular with children and adults alike. Once confined to just the fancy dress outfits of choice for drunken students and stag parties, they are now forming part of mainstream culture. Onesie parties are gaining in popularity, with groups of friends meeting to just hang out in their onesies.

At the beginning, it was probably easy to just write the onesie trend off as a fad that would fly out of town as quickly as it swept in. But now, it’s clear that onesies aren’t going anywhere. They may look a little bit odd, particularly if you’ve never worn one before, but it might be time to simply embrace them and get zipped up. Likened to being wrapped up inside a teddy bear, the onesie has a powerful effect on its wearer. Perfect for hungover days, sick days, slob out days and every day, the onesie is just waiting for you to curl up inside it. So put your order in now and just go with it. Now, I should probably get out of my onesie and into some normal clothes. I don’t think it’s quite appropriate attire for the office just yet!

Onesie-fan Lauren Sutton is a brand journalist who writes this post on behalf of Kigu animal onesie supplier A2Z Kids. Connect with the team on Facebook and Twitter (@A2ZKids) for more kids fancy dress news and trends.