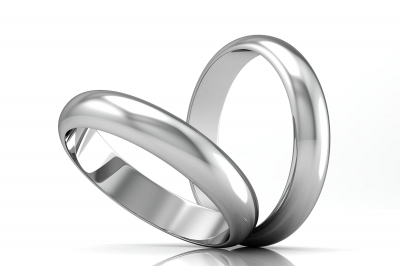 The exchange of rings during the marriage ceremony has a long history going back thousands of years. The ring symbolises a lifetime bond between two people and is a tradition that has stood the test of time.

The origins of the wedding ring tradition have been shrouded by the mists of time. According to ancient records, the Egyptians may have been among the first to use wedding rings. Almost 5,000 years ago, it seems that they braided plants into rings for use in important ceremonies and rituals, and hieroglyphics show that the ring was viewed as a symbol of endless love between a man and a woman. They also show the ring being worn on the ring finger of the left hand, which they believed had a vein that led directly to the heart, the vena amoris (the vein of love) as it later became known.

The Greeks adopted the ring tradition when they invaded Egypt under Alexander the Great and from them it passed to the Romans. At this time, metal rings were becoming the norm, the Romans preferring to use iron as opposed to the copper or bronze more common in other cultures. Also, by this time, the ring had become a legal symbol of betrothal that tied the woman to the man as his property, but it also gave her rights that prevented her position being usurped by rivals.

In an interesting twist on the wedding ring theme, in some Middle and Far Eastern cultures the ring would be in the form of a puzzle. Once removed it would fall apart; this was intended to help to guarantee the wife’s fidelity.

In the Christian tradition, wedding rings date back to the 9th century. In those early days, the ring was highly decorated and a far cry from the plain band so commonly seen today.

There have been times when wedding rings were considered inappropriate. During the colonisation of America, for example, the Puritans frowned upon such decoration, so men often gave their brides a thimble instead. For their part the women would remove part of the thimble to create their own ring, thereby keeping the tradition alive.

There has been some argument over the real meaning of the wedding ring. In modern times it has become a symbol of love and commitment on the part of the giver to the wearer and it also serves as an announcement that the wearer is not available. In earlier times it was possibly a way of keeping wealth or else a sign of possession.

In many places, romantics have stuck to the traditional idea that the continuous band of metal represents the unity of husband and wife and is a symbol of their eternal commitment and love. They also still place the ring on the third finger of the left hand, even though there is no evidence of the existence of the vena amoris. In an interesting throwback, modern couples often engrave their rings with their initials and the date of their wedding, a practice first seen in Roman times but only recently resurrected.

This overview of the history of wedding rings shows just how significant they have been and always will be. Some of the old traditions still live on, and some new ones are being created.