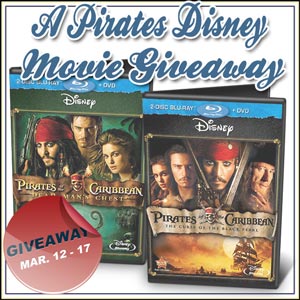 Pirates of the Caribbean: The Curse of the Black Pearl

From producer Jerry Bruckheimer (Pearl Harbor) comes Pirates of the Caribbean: The Curse of the Black Pearl, the thrilling, high-seas adventure with a mysterious twist. The roguish yet charming Captain Jack Sparrow’s (Johnny Depp) idyllic pirate life capsizes after his nemesis, the wily Captain Barbossa (Geoffrey Rush), steals his ship the Black Pearl, and later attacks the town of Port Royal, kidnapping the governor’s beautiful daughter Elizabeth (Keira Knightley). In a gallant attempt to rescue her and recapture the Black Pearl, Elizabeth’s childhood friend Will Turner (Orlando Bloom) joins forces with Jack. What Will doesn’t know is that a cursed treasure has doomed Barbossa and his crew to live forever as the undead. Rich in suspense-filled adventure, sword-clashing action, mystery, humor, unforgettable characters and never-before-seen special effects, Piratesis a must-have epic on the grandest scale ever. 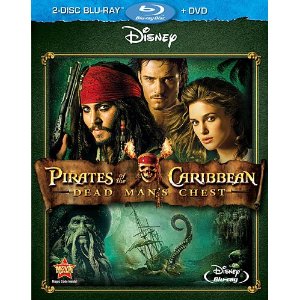 Take the first Pirates of the Caribbean film, add a dash of 20,000 Leagues Under the Sea and a lot more rum. Shake well and you’ll have something resembling Dead Man’s Chest, a bombastic sequel that’s enjoyable as long as you don’t think too hard about it. The film opens with the interrupted wedding of Will Turner (Orlando Bloom) and Elizabeth Swann (Keira Knightley), both of whom are arrested for aiding in the escape of Captain Jack Sparrow (Johnny Depp) in the first film. Their freedom can only be obtained by getting Captain Jack’s compass, which is linked to a key that’s linked to a chest belonging to Davy Jones, an undead pirate with a tentacle face and in possession of a lot of people’s souls. If you’re already confused, don’t worry–plot is definitely not the strong suit of the franchise, as the film excels during its stunt pieces, which are impressively extravagant (in particular a three-way swordfight atop a mill wheel). It may help to know that Dead Man’s Chest was filmed simultaneously with some of Pirates 3, so don’t expect a complete resolution (think more The Empire Strikes Back) or the movie will feel a lot longer than it really is. Bloom shows a tad bit more brawn this time around, but he’s still every bit as pretty as the tomboyish Knightley. (Seriously, sometimes you think they could swap roles.) Bill Nighy (Love, Actually) weighs in as Davy Jones and Stellan Skarsgård appears as Will’s undead father. But the film still belongs wholly to Depp, who in a reprise of his Oscar-nominated role gets all the belly laughs with a single widened eyeliner-ed gaze. He still runs like a cartoon hen and slurs like Keith Richards–and he’s still one of the most fascinating movie characters in recent history. –Ellen A. Kim From: http://www.amazon.com/Pirates-Caribbean-Chest-Three-Disc-Blu-ray/dp/B004DTLK7G/ref=pd_sim_mov_1

And now for the Rafflecopter – an adventurous battle of pure chance!

You need javascript enabled to see this giveaway.