Best Recipe for the GIANT CUPCAKE! 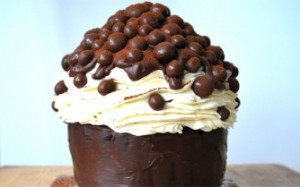 My little sister is a budding baker, mainly because she loves to eat cake! She has a reputation for making fantastic brownies and she LOVES cupcakes!

We went on holiday last year and on the TV they kept showing infomercials for the Giant Cupcake moulds, she became obsessed with the idea! When we got back to England I ordered one on eBay and gave it to her for her birthday.

After numerous failed baking attempts, I came across this recipe which comes out perfect every time and is so fun to decorate! Now every time there is a birthday she insists on making this giant cupcake.

Ingredients For the giant cupcake: