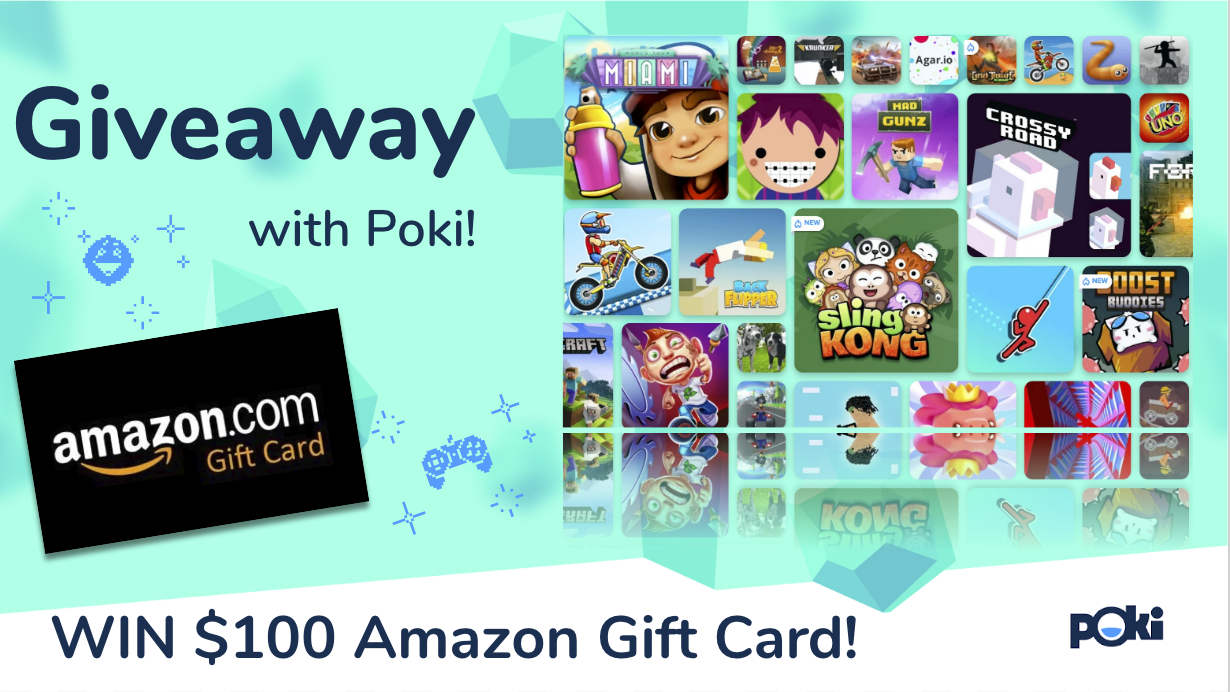 Fall is coming!  Time for a fun giveaway from Poki!

I’ve teamed up with Poki to bring you a pretty awesome Rafflecopter giveaway. We’ll be giving a $100 Amazon gift card to one lucky winner- just enter on the rafflecopter below!

The temperatures are starting to draw in – or at least they should be – and autumn is right around the corner. Fall is my favorite time of year! It’s time for pumpkin spice lattes, wrapping up warm, and watching the skies for the first signs of that all-important winter snow.

As we snuggle up and draw our families close around us, it’s worth thinking about what we can do to entertain them. After all, while summer is around, it’s not hard to think of stuff to do; go outside, get down to the beach and splash around, grab ice creams and soak up the sun…the possibilities are endless. But what to do when winter gets here? Kids can only spend so much time outside until they are too cold, not to mention it gets dark so soon!

If your family is like mine, gaming is always fun! Gather around the laptop and check out Poki, my new favorite website. Poki is a popular web gaming platform offering free online games to more than 30 million users worldwide. It is best known for its exclusive web games Subway Surfers, Crossy Road, and these other popular games.

Whether it’s io games like Slither.io or any other fun category or game, Poki is the destination for the best games to play right in your browser. There’s a very good reason Poki describes itself as “the online playground for kids of all ages”. If you’re a family, you’ll love the variety and depth of games on offer via Poki. If you’re an adult looking for somewhere to game, Poki’s great for you too!

Poki is a Playground!

Yes, it’s true – Poki features all kinds of games. Twitch gamers and reflex junkies will find plenty of action games to keep them occupied. If you prefer to use your grey matter, there are also lots of strategy titles on Poki. It really is the playground for kids of all ages – and that includes you, whether you’re a kid or not! We’ve all lost touch with our inner child, and Poki is helping us to rediscover that aspect of ourselves.

Before we get to the giveaway, I want to shine the spotlight on a particular Poki game that’s given me a lot of joy. I mentioned it earlier as part of Poki’s io game collection, but it’s worth spotlighting. I’m talking, of course, about Slither.io. This is a great game you and your kids (or just you) will have a wonderful time playing, and best of all, just like Poki’s other games, it’s totally free!

So what is Slither.io? Well, if you’re not familiar with io games, here’s a quick lesson. These games are basically super-simple multiplayer experiences where the objective is to be the biggest player and consume all the others. In Slither.io, you’re a snake, but in Agar.io – one of the first games of this kind – you’re a cell in a petri dish. Developers are making all kinds of different io games.

Slither.io could well be the best of them, though, because it combines two games we all know and love. From io games, Slither.io takes the ability to grow and consume other players, the simple gameplay concept, and the basic controls. Unexpectedly, Slither.io also takes influence from Nokia’s Snake game in its core mechanics and concepts. That’s what makes it so unique. 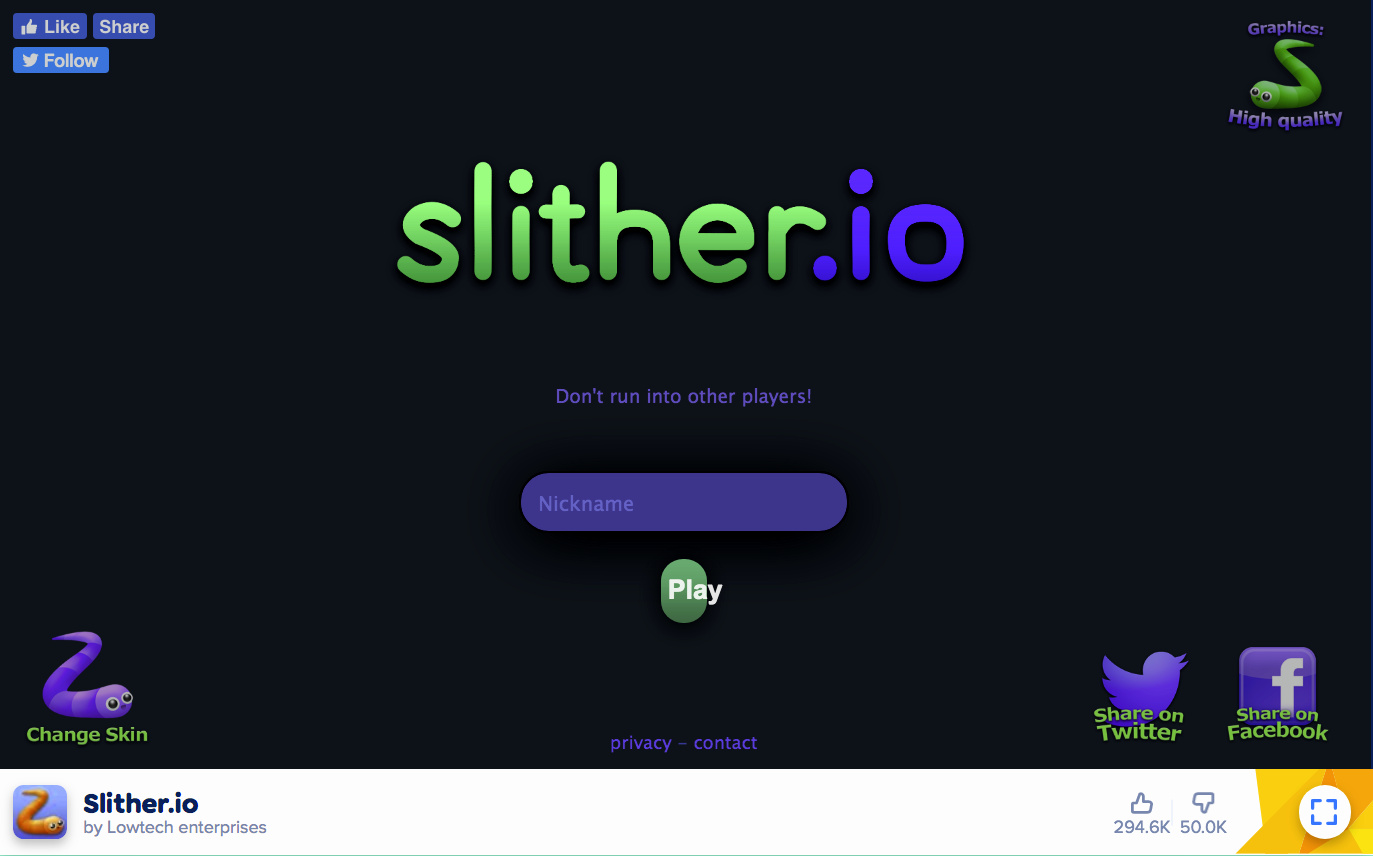 In Slither.io, just as with other io games, your objective is to grow as big as you can and consume other players. Control is really easy – you just move your mouse around and your snake avatar will follow the cursor. This makes the game ideal for anyone, even those who don’t usually do so well with difficult control schemes. There are no quests, no hidden objectives, and no map – just you, other snakes, and the prospect of victory! 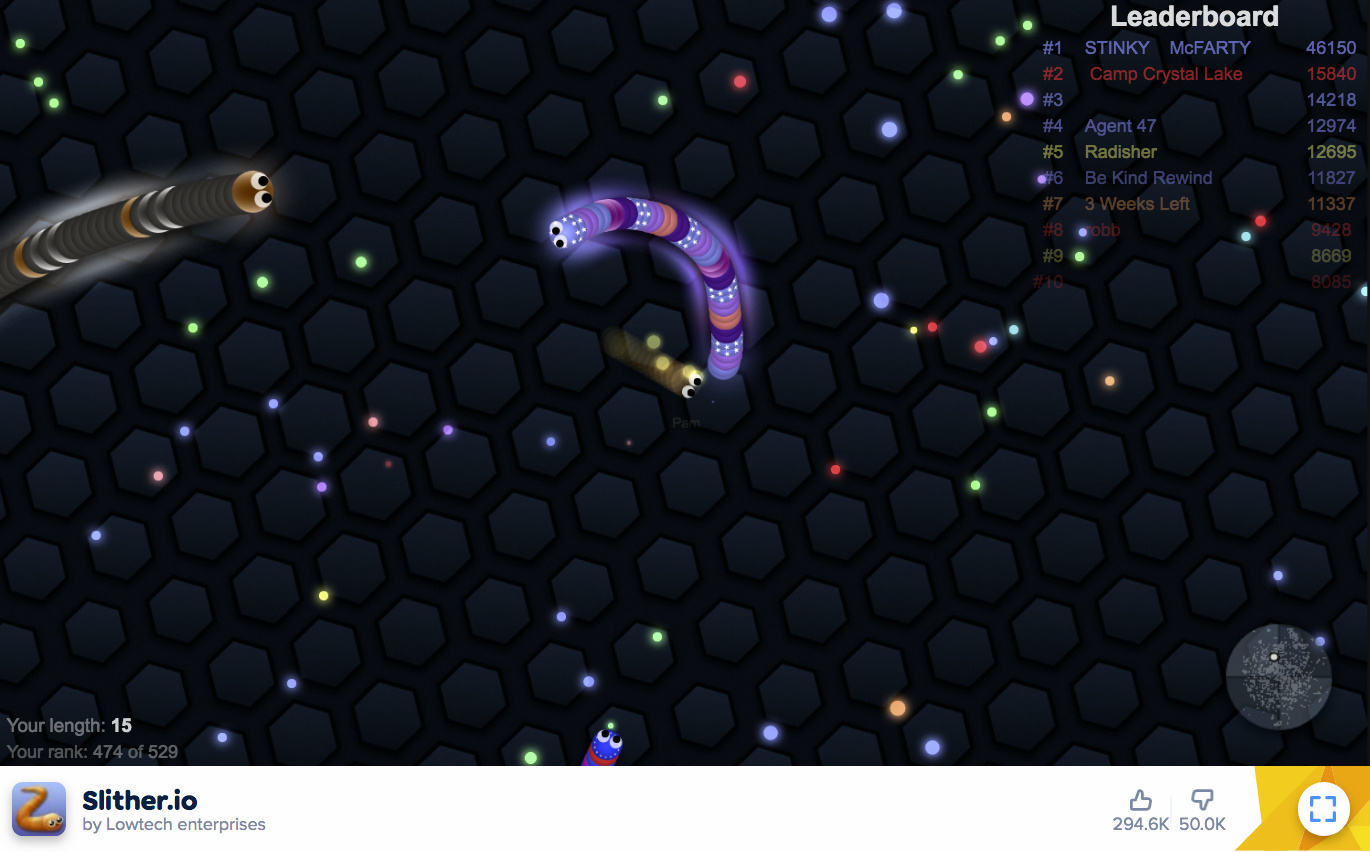 Once you’re large enough, all you need to do is collide with another player and you’ll immediately destroy them. They’ll quickly turn into blobs which you can collect. If you’re not big enough, a collision will kill you instead, so you’ll need to make sure you’re committed! Throw in some avatar customization in the form of colors and flags and Slither.io promises to be a great time for all.

I strongly recommend you check out Slither.io, but if it’s not your thing, Poki has plenty of other stuff for you to play. You’ll find other io games if Snake isn’t your thing, but you’ll also find racing games, robot fighting titles, basketball sims, and plenty more! That’s why I’ve teamed up with them for the giveaway – I do think Poki is the best place on the web to play games.

About that giveaway. As I said earlier, thanks to Poki, I’ll be handing out a $100 Amazon gift card to one lucky winner via the Rafflecopter giveaway widget. Just log in to Rafflecopter and follow the directions. Just leave me a comment and let me know YOUR favorite Poki game!  All the other tasks are optional. As usual,  the more tasks you complete, the greater your chances of winning.

The giveaway is open to US only, ages 18+

The winner will be chosen and emailed after the close of the giveaway.

Be sure to enter daily for more chances to win! Good luck!