Dad’s that play games with their children rock! This Father’s Day, we are adding several new games to our game stash that Dad enjoys playing with the little ones. From strategic to just plain pretty, Winning Moves has games for the entire family. 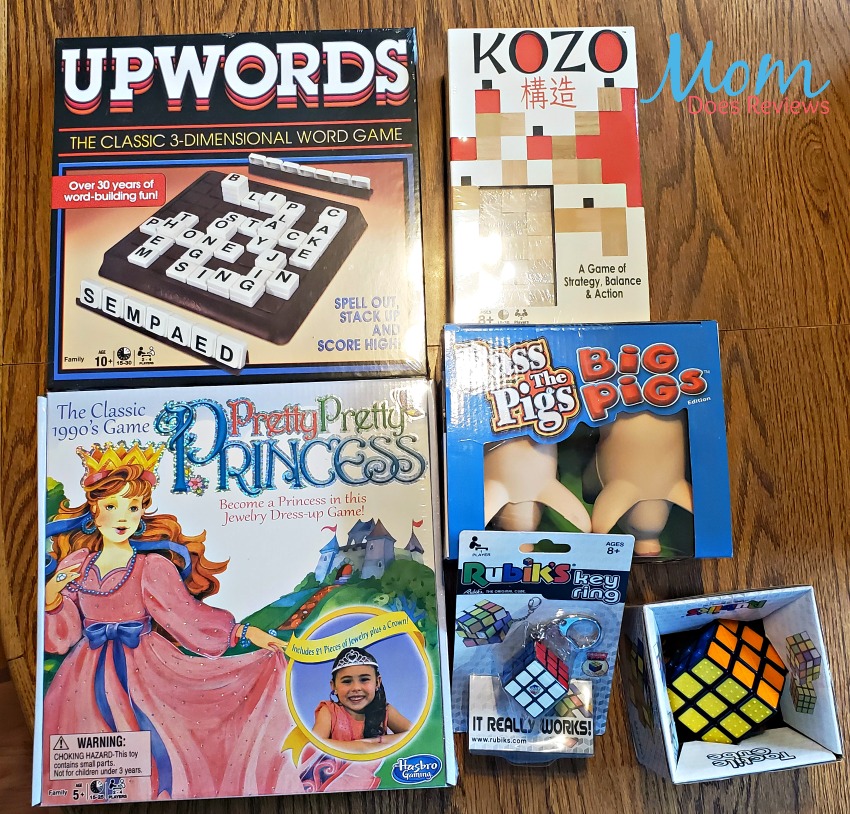 Winning Moves USA (WMUSA) is a leading maker of board games, card games, and puzzles. Since WMUSA’s first year of operation in 1995, the company has forged a close relationship with one of the world’s largest game companies, Hasbro, Inc., owner of Parker Brothers and Milton Bradley. WMUSA also has a great relationship with Seven Towns, Ltd. (the owners of the Rubik’s brand). As a result, many long-lived Parker Brothers and Milton Bradley games & Rubik’s puzzles are now marketed by WMUSA!

Some of our favorite family game night games:

Based on the smaller versions, these Big Pigs bring the miniature pigs to a new level and size! These over sized foam pigs still land on all the pig poses that their little pig dice cousins do! 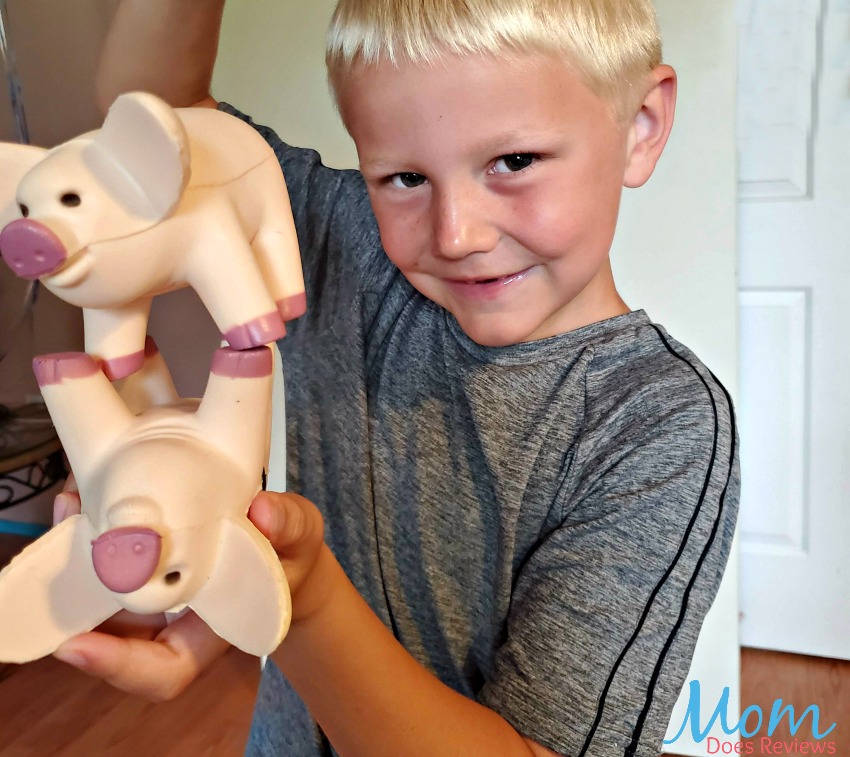 These foam pigs were a hit with the crew! Of course who wouldn’t like tossing pigs? Depending on how they land, points are scored. And while there is some strategic play involved, it was funny to watch the little ones randomly toss their pigs and end up winning the game!

The new Rubik’s Cube now has shapes on each side. By adding shapes to the each of the colored squares, the Rubik’s Cube is now playable even with your eyes closed! 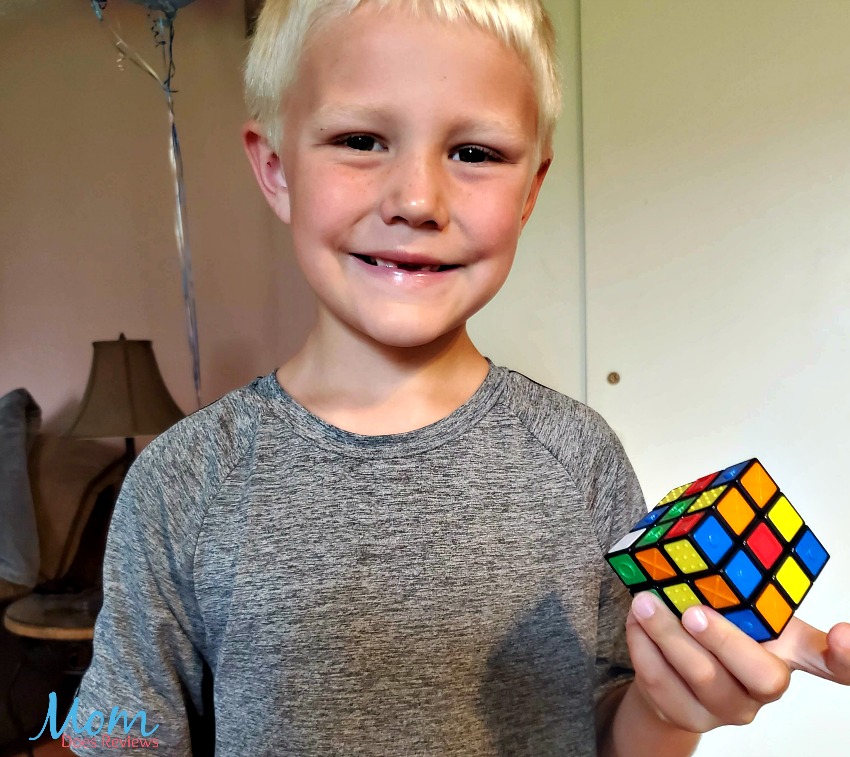 As if the original version wasn’t hard enough to solve! That said, the guys have spent far more time playing with this cube than the other ones we have with out the shapes. There must be something to being able to feel the shapes. No one has solved it (thanks to Dad mixing it all up) but they are committed to getting it back to the proper shape.

This micro version of the original Rubik’s Cube except it is attached to a key chain. It has the same number of squares as the larger cubes just smaller. 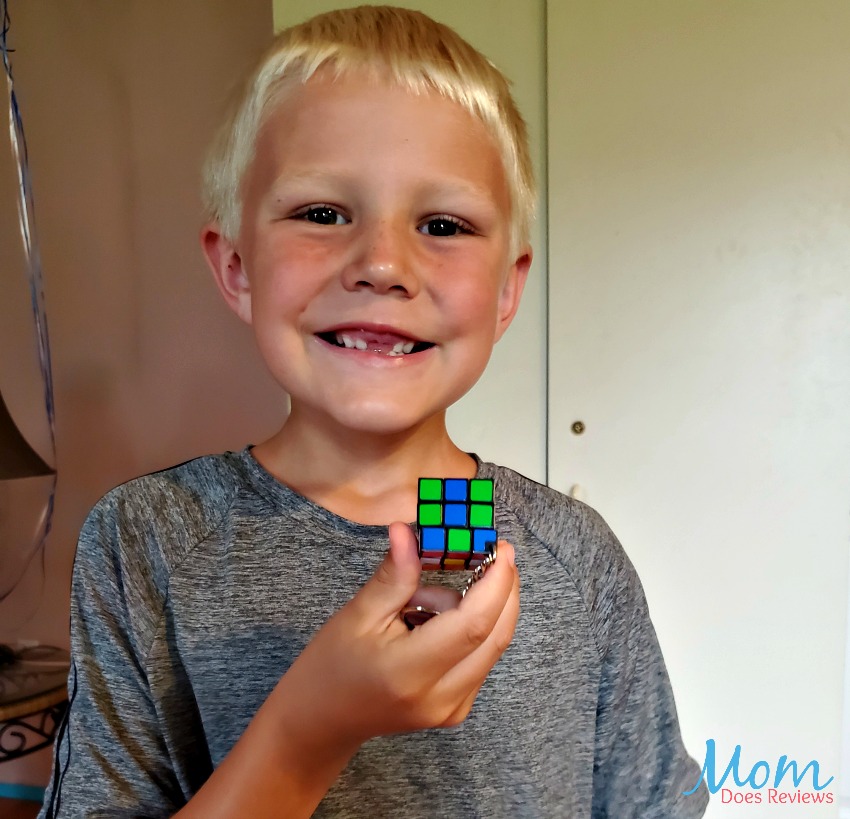 This little key chain cube has a place of honor in our vehicle. Dibs are called on it as we load up! Each person gets their turn as the cube changes hands every time we stop (and get out of) the vehicle. Yes we had to add the part of actually getting out of the vehicle to prevent fights at stop signs, red lights, and when in traffic. Aren’t little ones fun?

This game takes stacking blocks to a new level. It can be played by 2 players or in teams. Because it is a three dimensional game, strategic play and a nimble touch are required. This game can be a real challenge because the blocks are not the same shape like other building games. 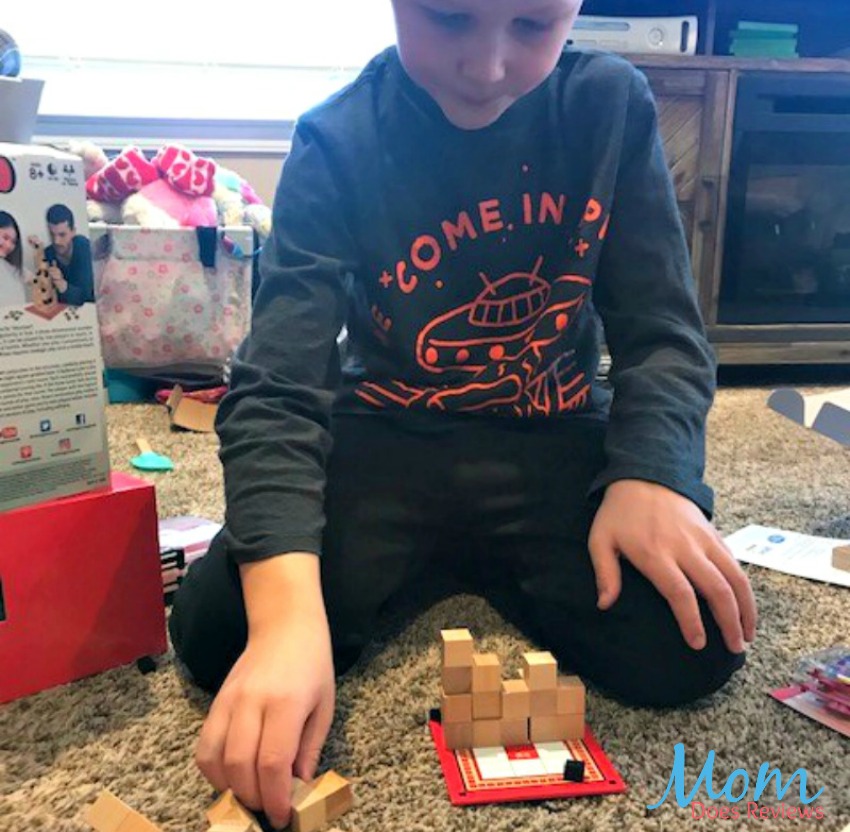 My crew enjoys playing this game because the little ones can play too. Of course the rules are modified a little from the version the adults play, but being able to play with Dad or older siblings is important to the little ones.

This classic game from the 80’s brings back the fun of building and stacking tiles. The game has a cubed deck that holds the tiles in place a lot better than other games. This is great for the little ones as they struggle to put their tiles in the proper position when they move around. 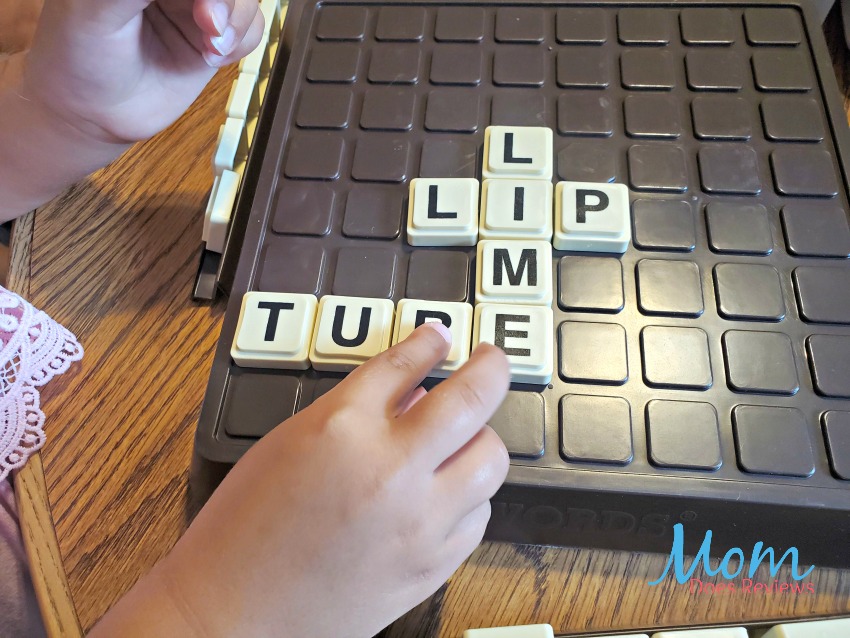 The game includes 64 tiles and can be played with two to four players (or as teams when you have little ones). Depending on how “liberal” you are with the words allowed, this game is good for hours of laughter and fun.

Who doesn’t like dolling up like a princess? The object of the game is to collect a set of matching color jewelry consisting of a necklace, bracelet, ring, and earrings. Once you have your set of matching jewels and the glorious crown, you win the game! 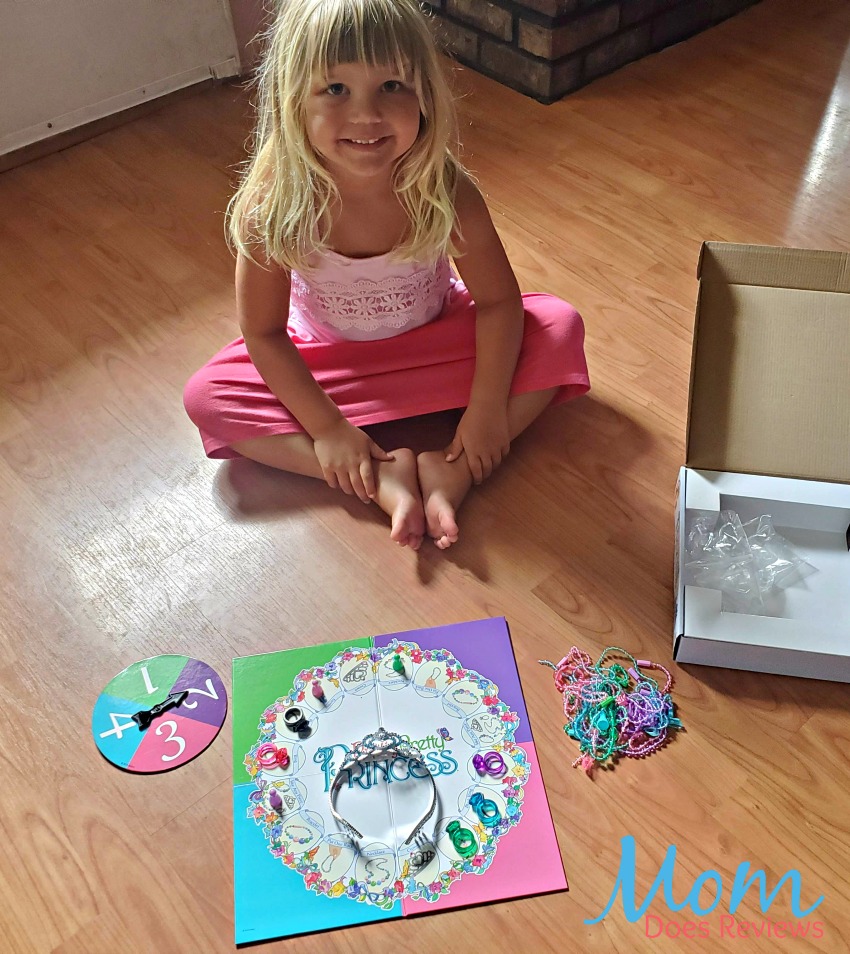 This is by far the most asked game the little girls ask Dad to play with them. They get it all set up and I am so glad he is a good sport. He puts on the jewels as he wins them, which makes the little girls giggle. Playing the game is easy and doesn’t require reading. Just spin the spinner and move your piece accordingly. As you move around the board, you collect your pieces of jewelry. There is a catch, watch out for the black ring because if you have it, you can’t collect new pieces. Obviously, the black ring is not something you want and you try to ditch it as soon as possible.

As you can see from the list of games above, Winning Moves has something to entertain everyone. This Father’s Day, add these games to your game stash so Dad will have new games to challenge the little ones. Winning Moves also has a ton of games geared more towards adults and would be great as a Father’s Day gift. 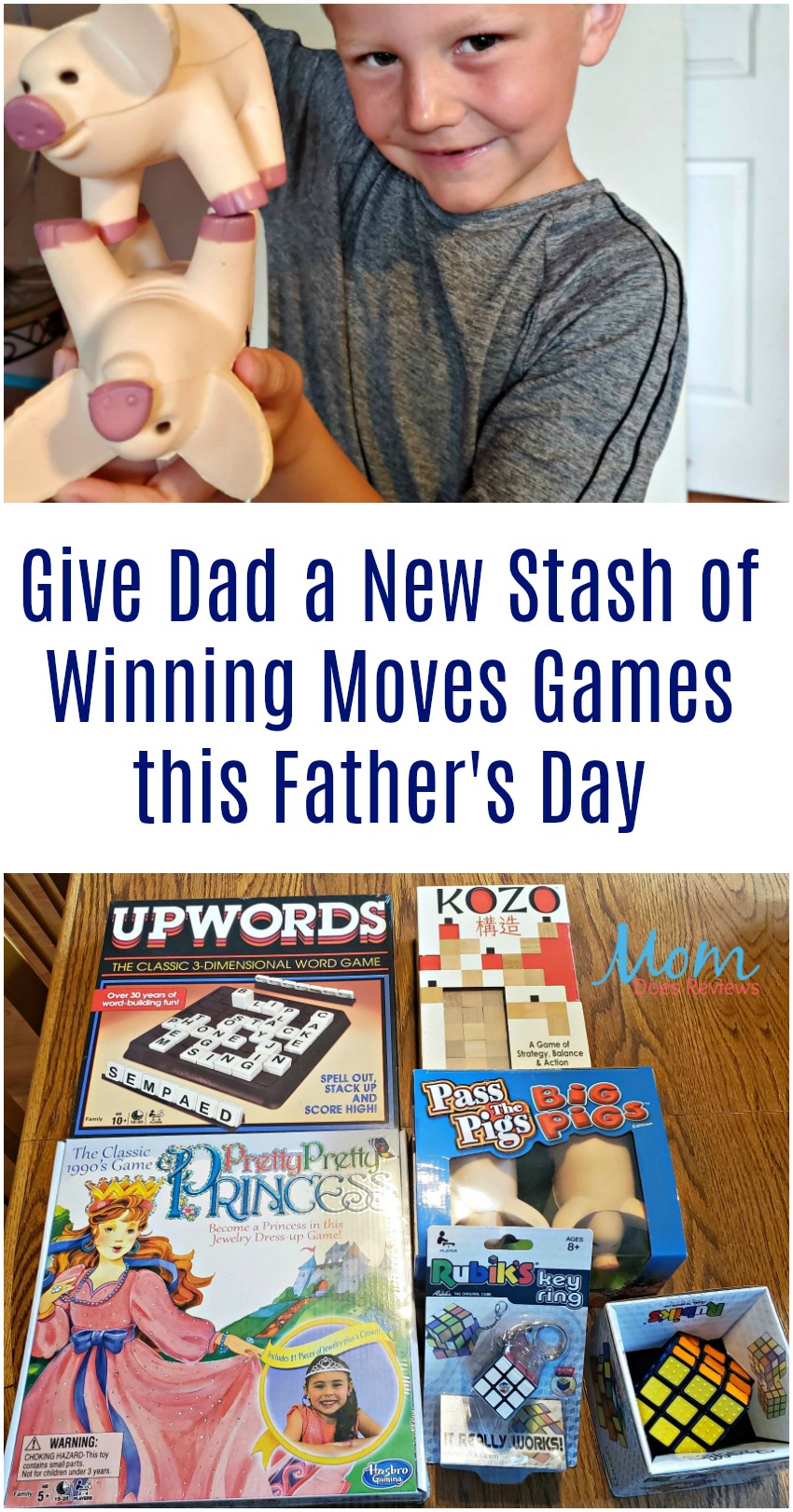 Make sure to follow Winning Moves on social media: 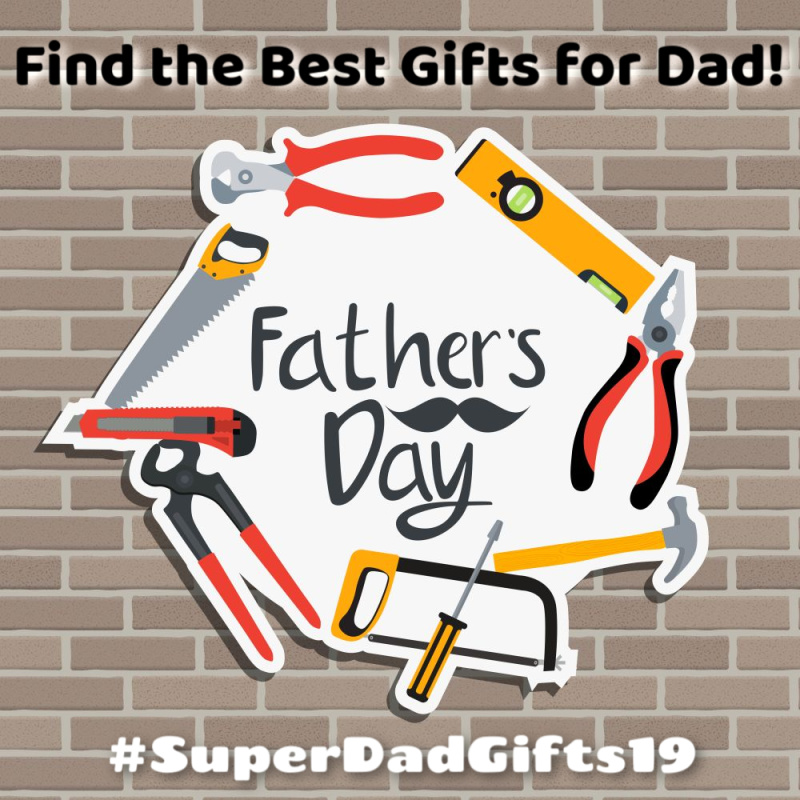