If you’re a Marvel fan and have young kids, you NEED to check out this new app!  Dex T-Rex is the first character for young kids from Marvel Comics maestro Stan Lee!  He is fun and cute and will teach your kids important lessons all in a new AR app! 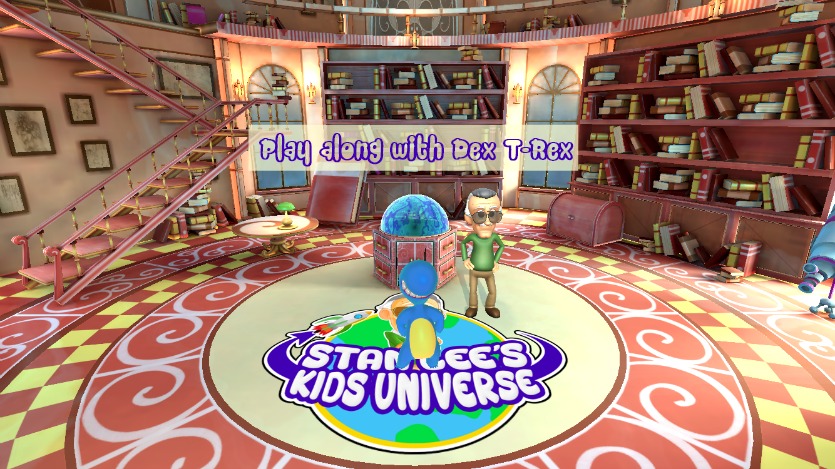 From Marvel Comics legend Stan Lee comes the first character in his Kids Universe: Dex T-Rex, a lovable, rambunctious little guy ready for any adventure. Dex may be small, but he IS a dinosaur — He smashes! He kicks! He shreds! —which means sometimes his version of play is a bit rough on the world around him. 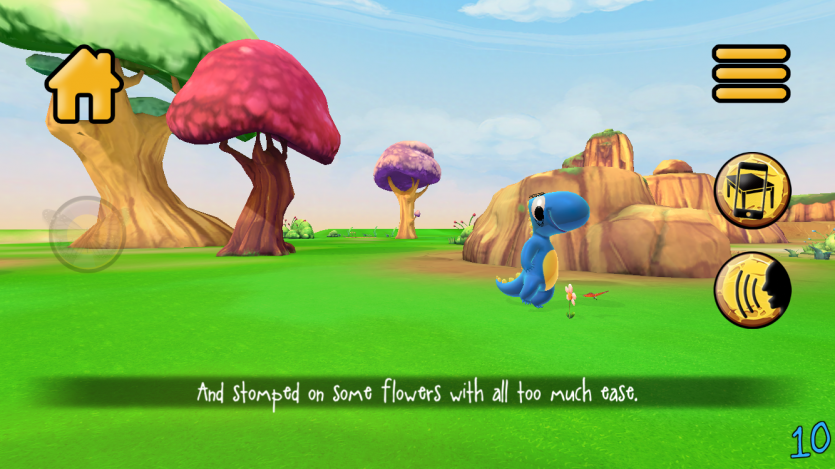 Our award-winning Hollywood effects team — in collaboration with Stan Lee’s Kids Universe — fuse 3D animated storytelling and augmented reality to create an engaging environment for Dex — and kids — to explore while also learning critical social skills like understanding how their actions affect others. Intuitive, non-competitive, individualized play: Read, listen, or watch the animated 3D story. Tap the AR button to play with Dex in the real world — he scampers over books and blocks, and responds to your touch. 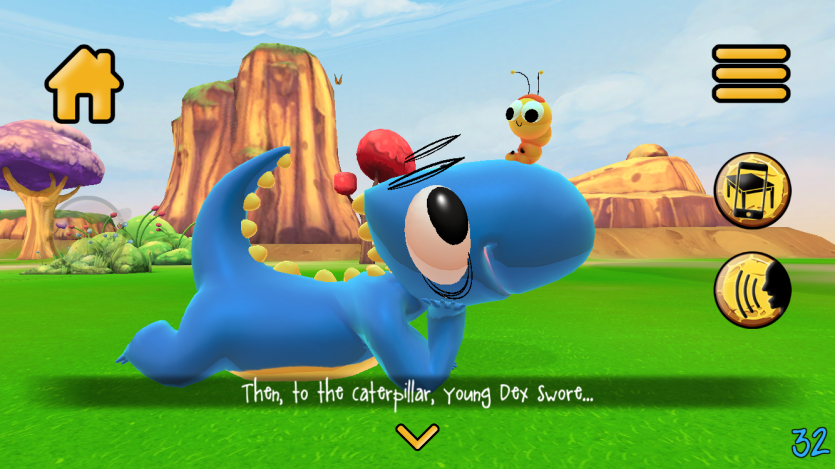 My Thoughts on How to Use the App:

Do you ever wonder if your kids think about how their actions affect others?  Well, Dex T-Rex comes to learn this his adventures may not be what he should be doing.  The story of Dex T-Rex can either be read along as in a bedtime story while watching in 3D .  Or, kids can explore more with the augmented reality- this way they can move around and see the story from many different perspectives. In the image below, the top screenshot is in 3D mode, the bottom is in AR.  You can even see Dex’s shadow in AR! 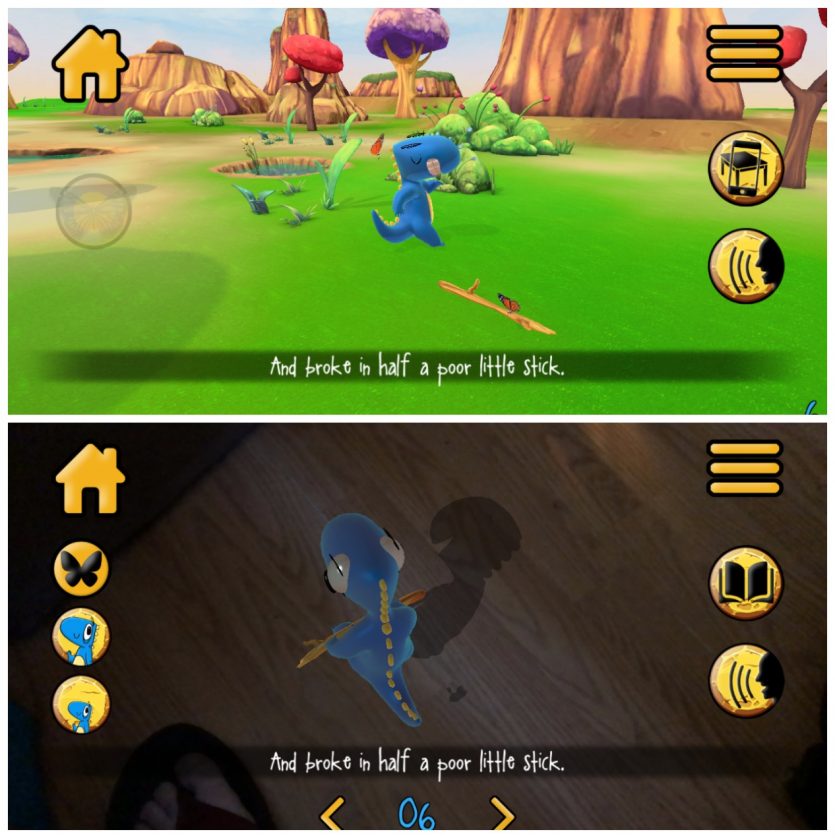 Dex learns that his actions do effect others- like the cute little caterpillar. Once he realizes this, he spends the rest of the story making right every wrong, even taping the grass and tying the broken stick back together.

Your child can have the app read the story or he can read it on his own with the captions at the bottom.  He can catch butterflies, bubbles and more.  If you’re reading along with him, you can ask him what Dex should have done.

You can even personalize Dex T-Rex with your favorite colors! 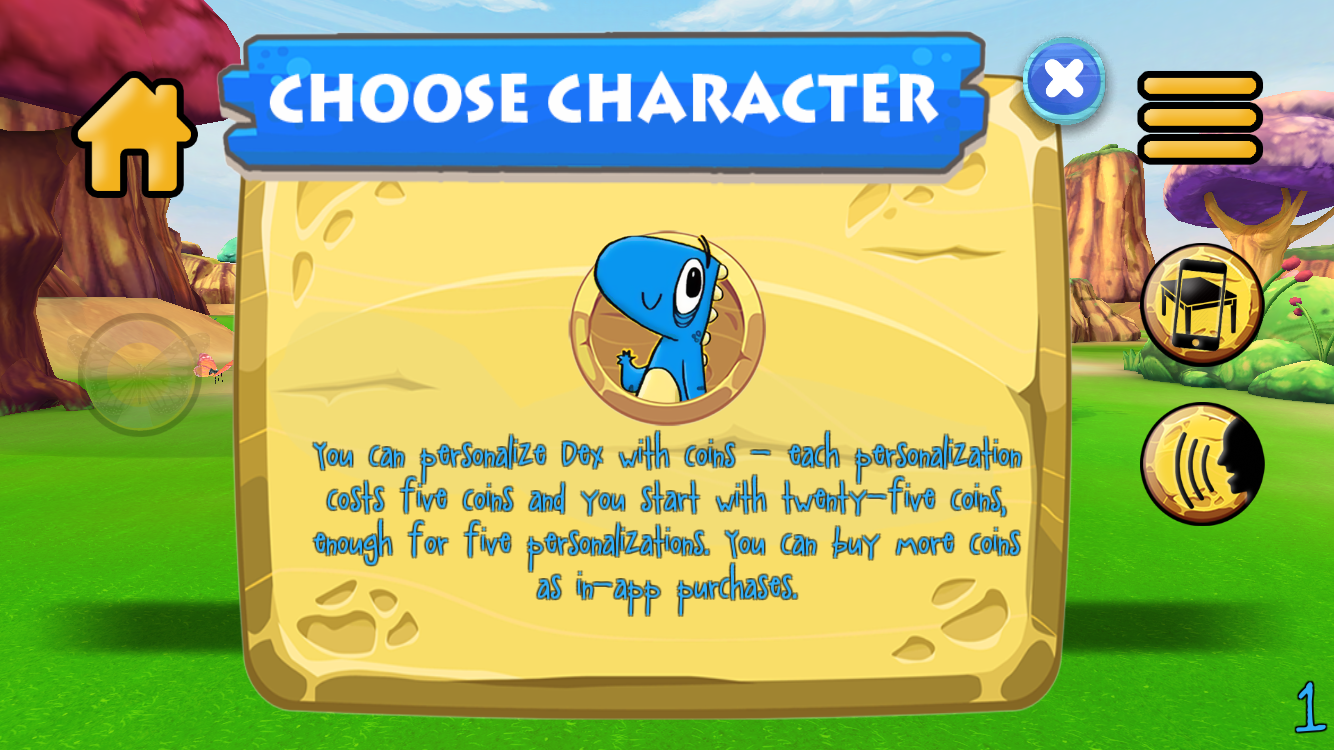 Playing Forward is a transformational technology studio that creates digital experiences that ignite children’s imaginations.  The apps developed by Playing Forward are designed to encourage kids’ social-emotional development.  How? The fun storytelling and amazing visual effects and the use of Augmented Reality all support this! 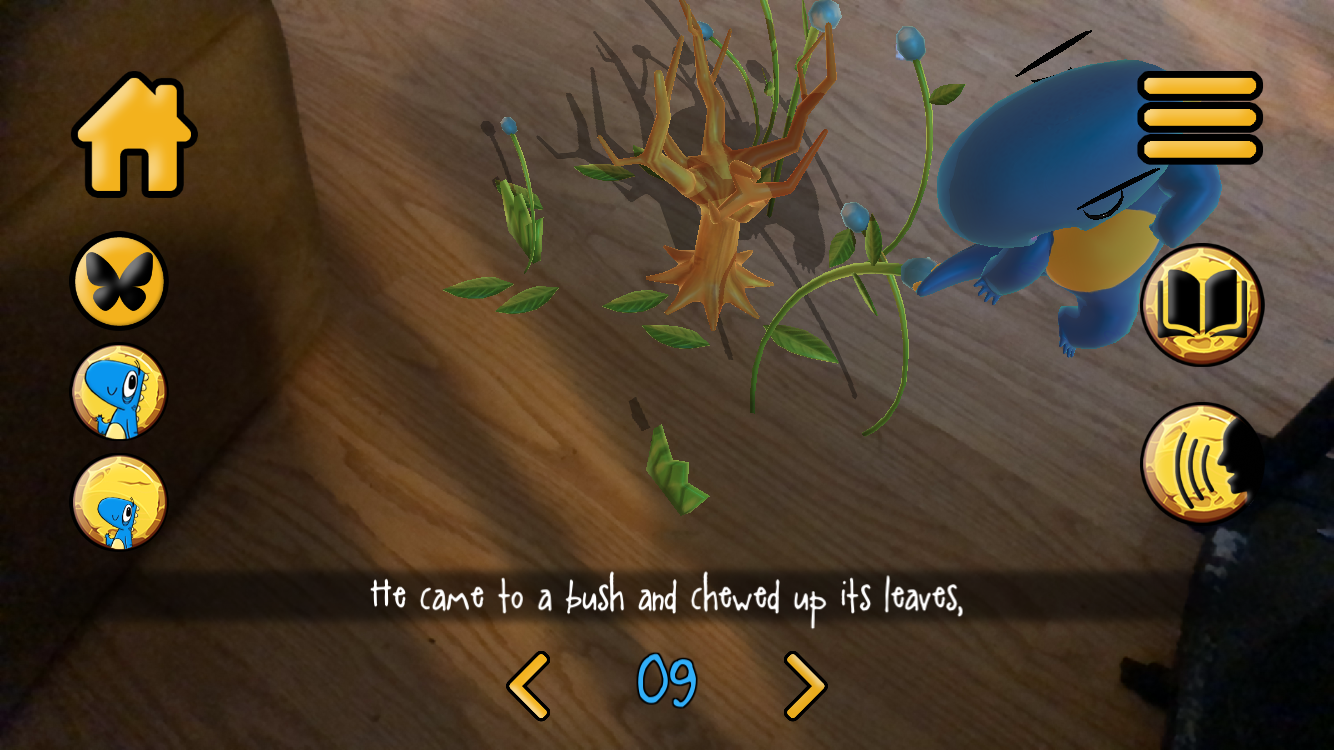 According to studies, social emotional development is key to success in school and in life. Playing Forward’s name comes from the fact that the company is “playing it forward” to give every child the very best shot at a happy childhood and a successful adulthood.

Playing Forward has test its apps with over 300 children in 18 classrooms across the US and Canada.

The Playing Forward apps are based on actual books:  a Penguin Publishing classic (“MAXI THE TAXI DOG”), a story from Stan Lee’s Kids Universe series (“DEX T-REX”), and Lizzy’s World featuring the STEAM-powered character from a new independent book series (“IT’S JUST SO…”). 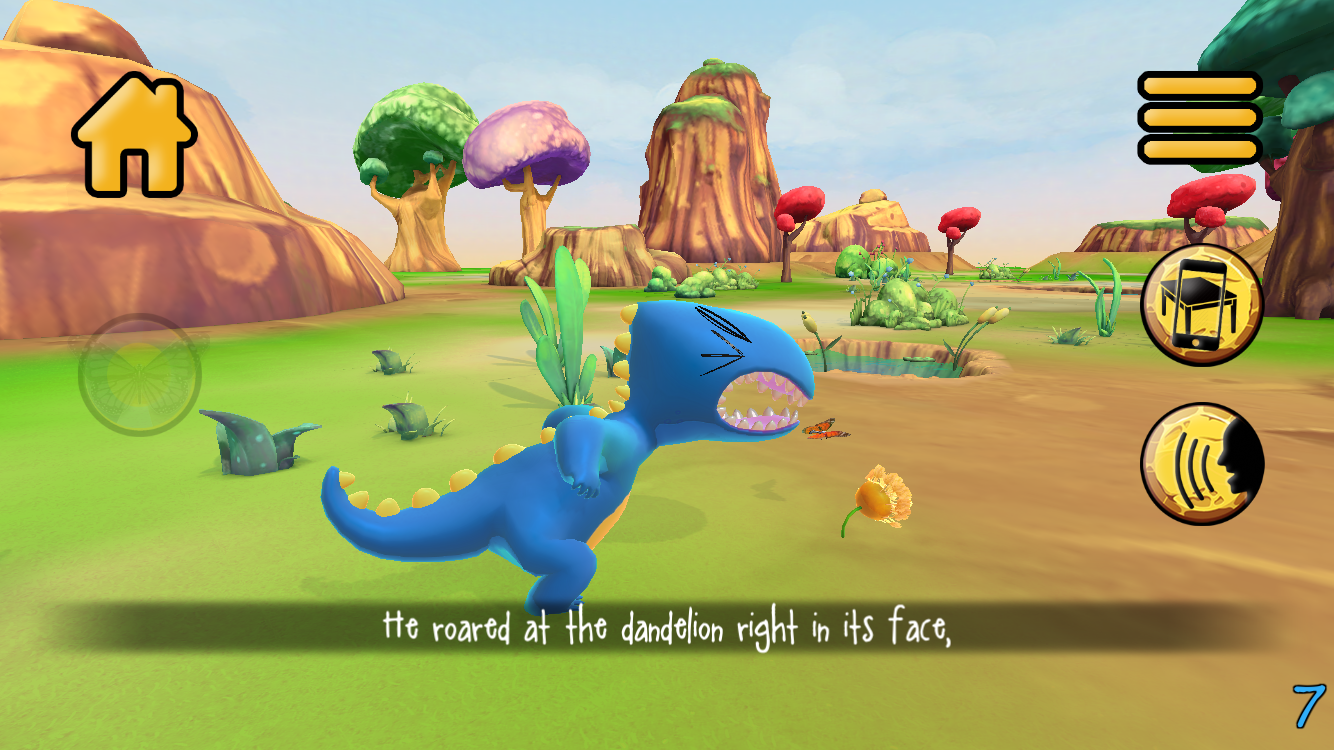 John Attard and Victor Talbot founded Playing Forward after years of entertainment industry successes — including an Academy Award for Visual Effects. They have worked on 100+ films, television & digital series, Broadway & Off-Broadway shows and more. They have also worked on Star Wars: The Force Awakens (Disney); The Jungle Book (Disney); Superman vs. Batman (Warner Bros.); Guardians of the Galaxy 2 (Marvel); and Avengers 3 (Marvel). How exciting!!

Enter the Contest to win weekend of play in Manhattan! 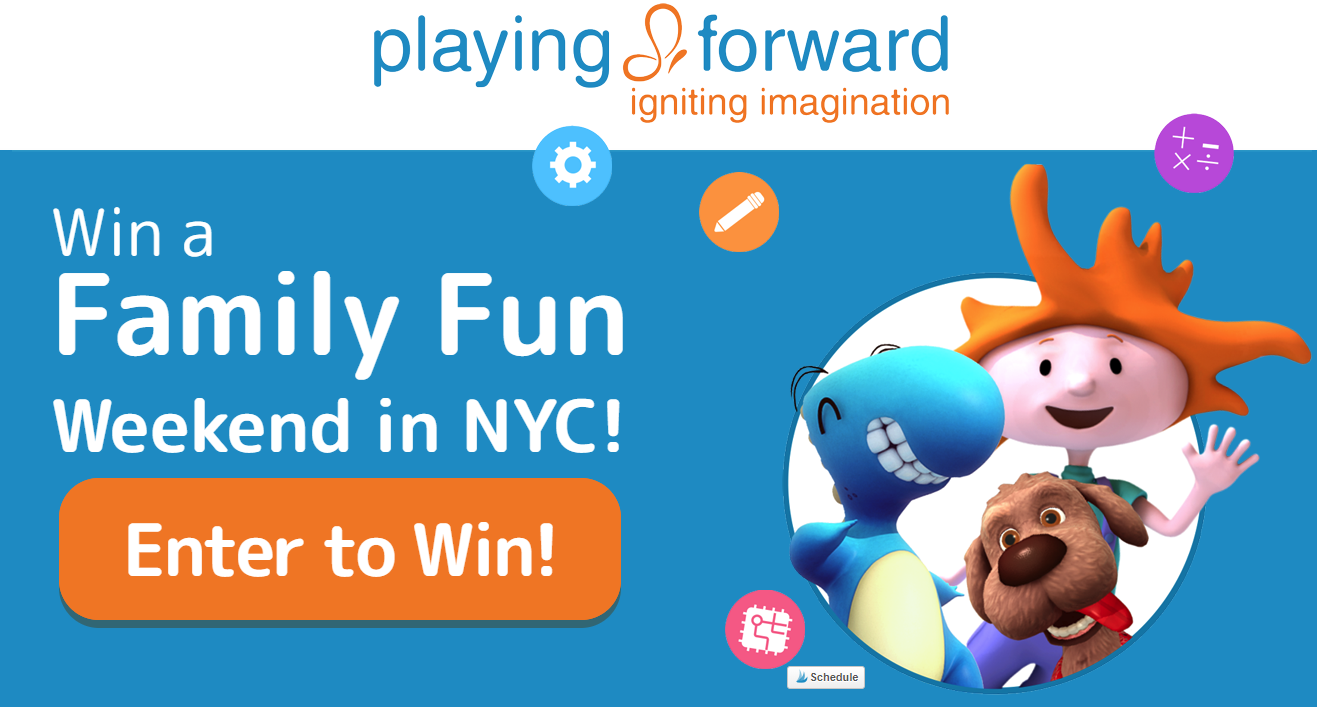 To celebrate the launch of these apps, Playing Forward is running a contest with the Grand Prize being a whirlwind STEAM-powered weekend of play and exploration in Manhattan

The Grand Prize includes air transportation, a two night hotel stay, a Visa gift card to cover meals, various museum tickets for a family of four.  It also includes personalized experiences at two of Manhattan’s most unique museums- the Natural History Museum and the Children’s Museum of the Arts!

The contest’s runner-up will win an iPad

More of My Thoughts:

At first, the app seems too simple, until you realize the important lessons it can teach your kids.  The world isn’t all about them.  What they do can and will affect the world and people around them.  If they stop to smash some flowers, there won’t be any flowers for the next person to enjoy.  Playing should be fun but not so rough that it damages others things and feelings.  Dex teaches kids to make things right when he learns how much harm he did.  This is an important lesson we assume our kids understand.  They will know they did wrong, but do we follow through and teach them to make it right?

What do you think about Dex’s actions?  Let us know in the comments below!

Don’t forget to enter the contest and download the app today!