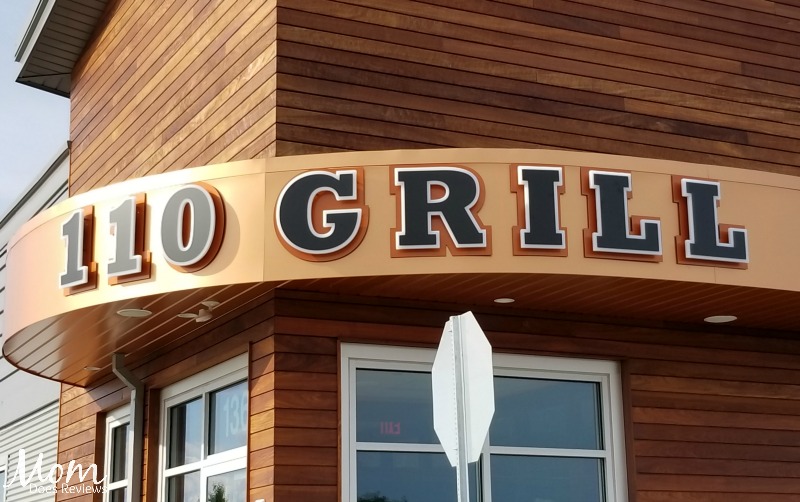 We were invited to dine at 110 Grill in Rochester NH in exchange for our honest review.  All opinions are 100% my own.

If you haven’t tried 110 Grill, you really need to!  Here is one reason to go and keep reading to see what my family thought:

110 Grill is a growing restaurant group based in Westford, MA, which currently has eight locations in Massachusetts and New Hampshire. Its comfortable, but yet upscale-casual atmosphere, complete with open kitchens, private dining rooms, large horseshoe-shaped bars and outdoor patios with fire pits, creates the ideal dining environment for any occasion.  110 Grill prides itself on preparing its dishes from the freshest ingredients in its scratch kitchens and offers seasonal menus and monthly specials. The organization is very committed to allergy awareness and features extensive gluten free menus.

Their Central Focus Shines through!

With the rapid and continued expansion of this upscale casual concept, the central focus remains the same: offer excellent service, quality food and an ideal experience at each and every new location, for each and every guest.

From the happy hostess, to our bubbly server Justine and the manager Mike, we felt welcomed and pampered from the minute we walked in the door.  We were offered a Gluten-Free Menu, something I have never been offered at a local restaurant. 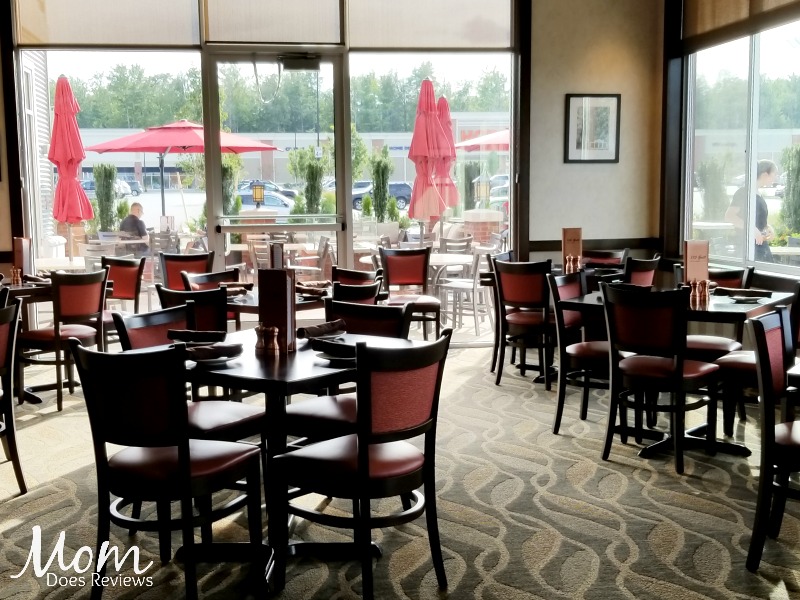 The interior was bright and open, even the kitchen was open.  The bar had a modern design that added to the fun atmosphere. 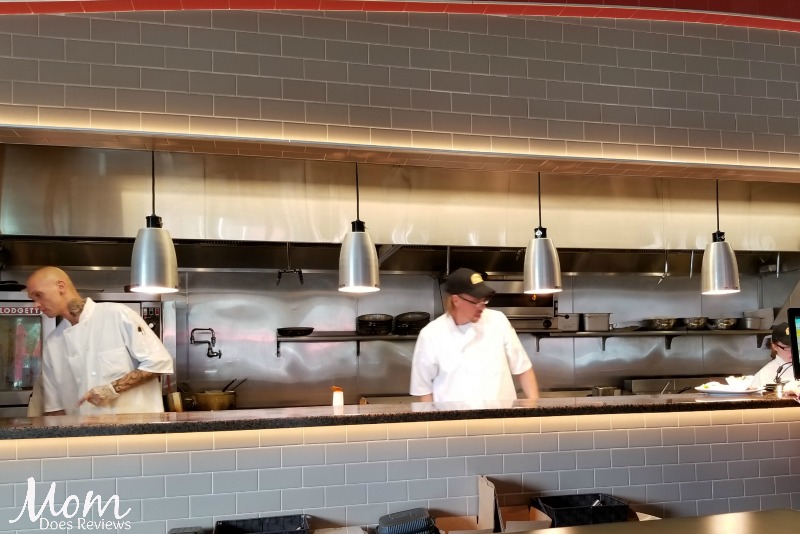 At 110 Grill, they prepare the dishes from the freshest ingredients in their scratch kitchens and they offer seasonal menus and monthly specials. They are very committed to allergy awareness and offer extensive gluten free menus.

The menu has some unique and creative choices that we haven’t seen anywhere else.  One thing in particular that we HAD to try was a HUGE pile of BBQ Chicken Nachos.   We eat nachos quite a bit that my hubby makes with ground beef, but I had never thought about using Chicken and BBQ sauce!  They were amazing! 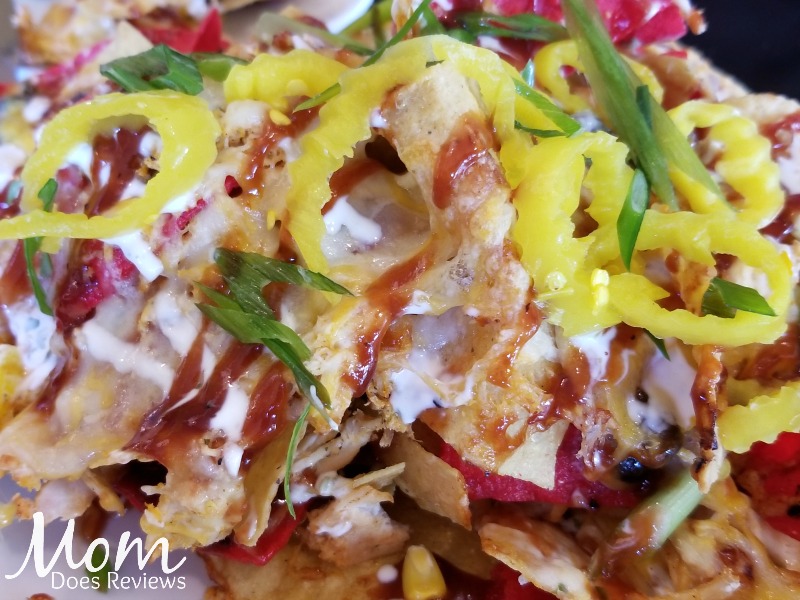 My hubby ordered a Ribeye with Mushroom, Onion Strings and Garlic Mashed potatoes from the In the Cut section of the menu.  It was cooked perfectly, was juicy and tender and told the manager it was the best steak he has eaten in years. 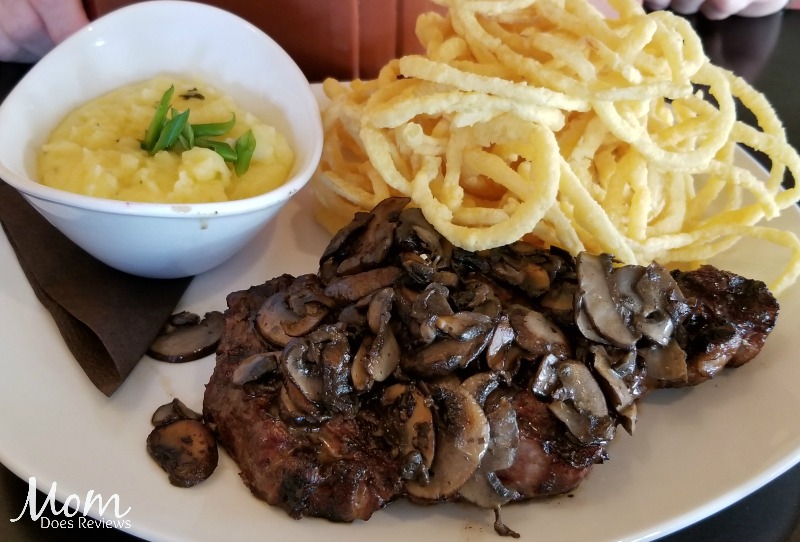 I ordered BBQ Salmon from the Summer Specials menu.  It came with Summer Squash Medley Stir Fry and I asked for Sweet Potato fries.  The Salmon was perfectly done and the BBQ sauce added a sweet touch that made the whole meal a culinary delight! 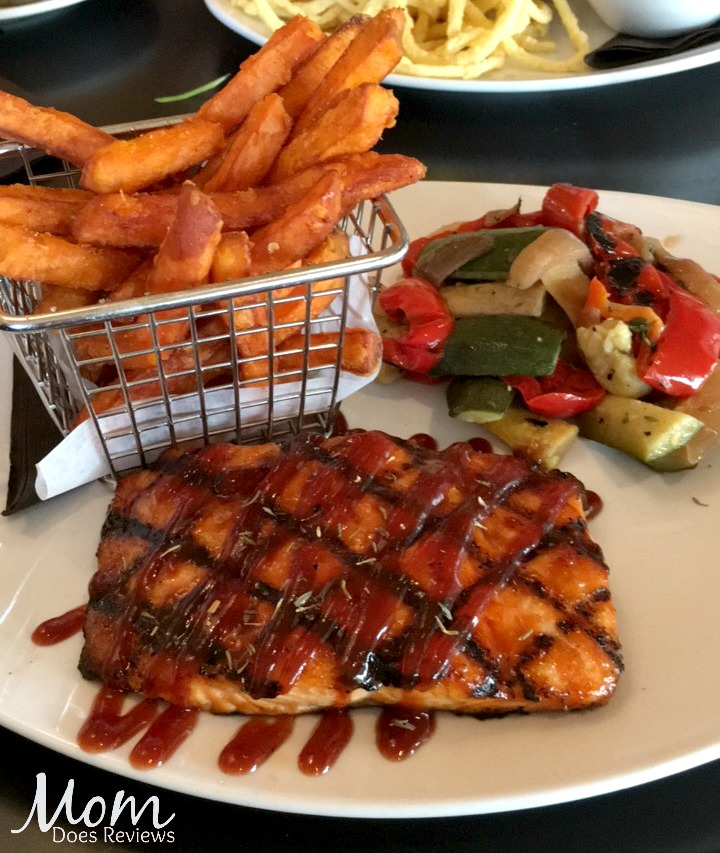 My son ordered a Cheeseburger with bacon from Between the Bread section of the menu.  One of my favorite things about our fries were the cute little fry baskets they came in.  It’s always more enjoyable to eat a dinner that is fun and pleasing to the eye!  His burger was done just like he ordered and it was so big, he had to take half of it home! 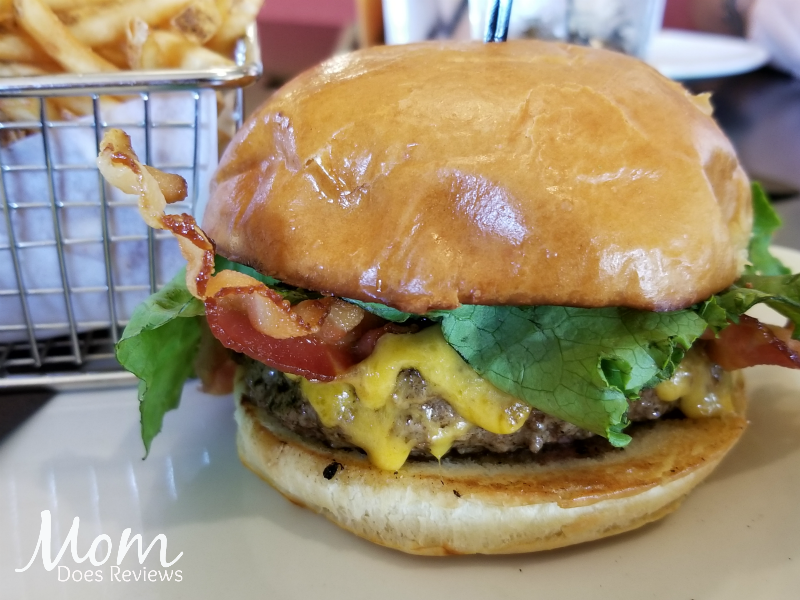 Vanilla Cheesecake Brulee was featured on the Summer Specials menu. It came with a raspberry sauce that added just the right amount of sweet and tart to make this my favorite dessert! 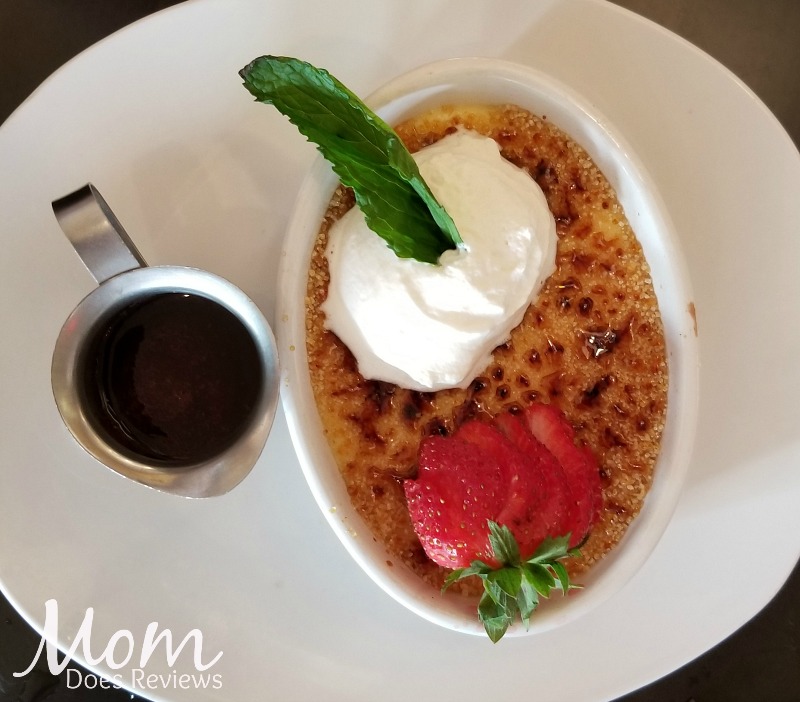 We also shared the Peanut Butter Cascade as the perfect ending to our amazing meal.  They boys couldn’t decide what part of the dessert they liked the best.  They had no trouble eating the whole thing and helping with the Brulee! 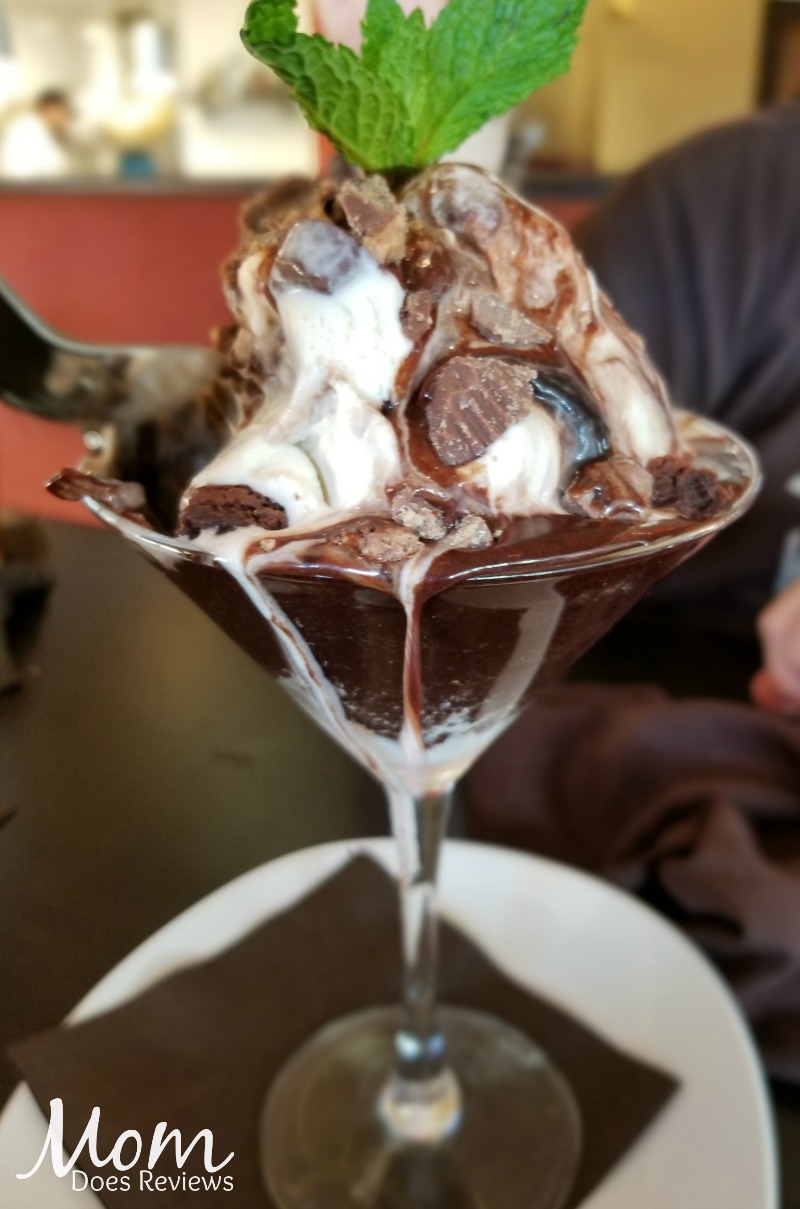 Overall, we were very impressed with the atmosphere, great attentive service, the food presentation and taste and the menu offerings.  We will definitely go back for another amazing meal in the near future! 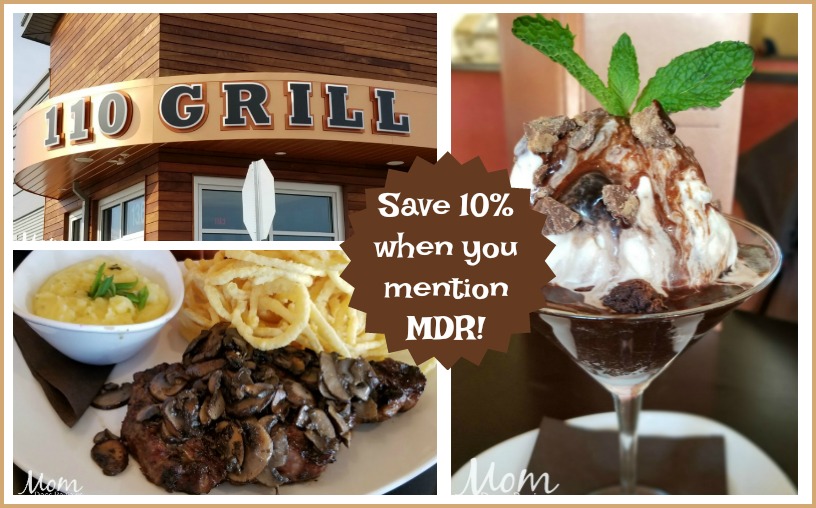 As many restaurants struggle to turn a profit in the midst of an uncertain restaurant industry, 110 Grill is expanding, and at an exponential rate. With eight existing locations including six in Massachusetts and two in New Hampshire, 110 Grill looks to bring at least four additional locations by the end of 2017 and six in 2018. This accelerated growth is a testament to its “scratch kitchen” approach, upscale-casual concept and integration within communities.

In September 2014, developer, Robert Walker, and restaurateur, Ryan Dion, partnered to create the 110 Grill restaurant group and together took over the first location in Chelmsford, MA. In April 2015, extensive renovations were completed in Chelmsford creating a modern, trendier ambiance. Starting with Nashua in December 2014, Walker and Dion opened seven more full service restaurant locations in Massachusetts and New Hampshire, and to date the company-wide sales 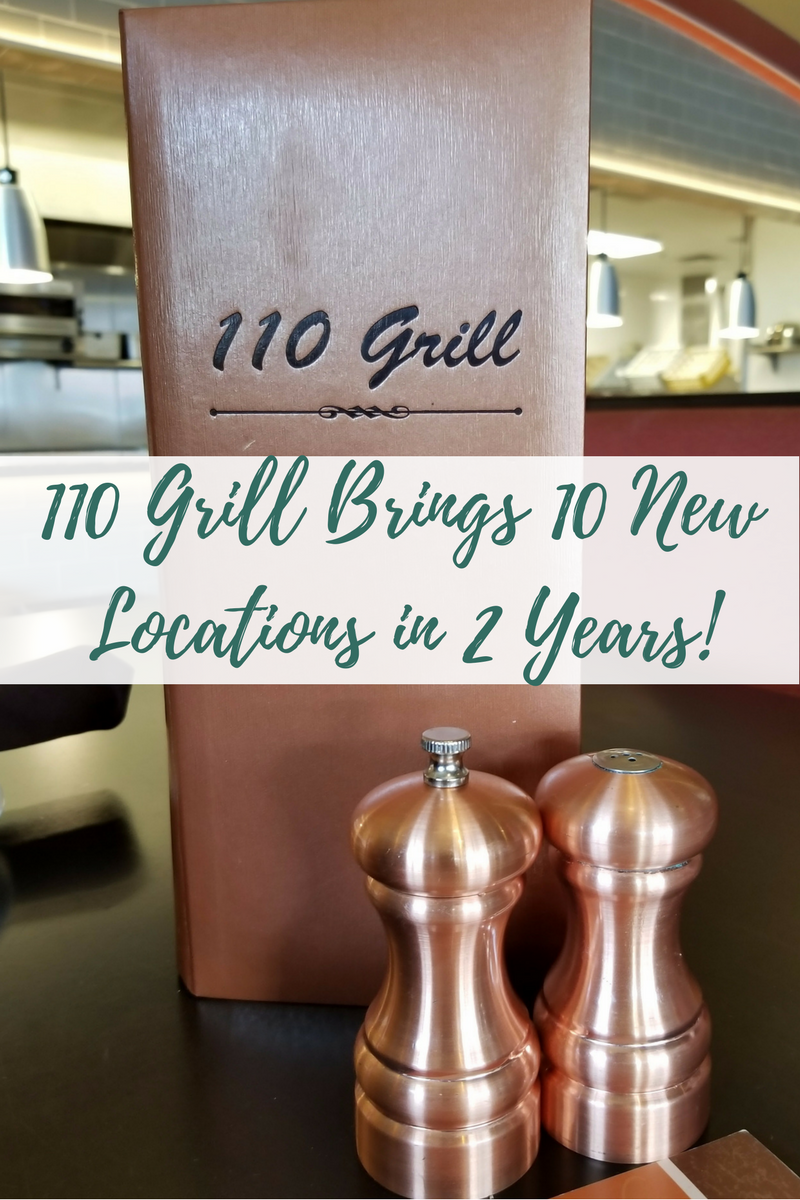 Be sure to keep up with the latest specials and new locations on social media:

On Tuesday, August 29th, 2017, 110 Grill Haverhill, the newest installment to the 110 Grill group of restaurants, will open its doors to the public, unveiling an upscale-casual atmosphere, array of comforting classics and individualized dining experience for all guests. With their modern American cuisine and trendy restaurant feel, the 110 team sees Haverhill as an ideal location for expansion, and looks forward to serving the thriving community. Located at 1175 Main Street in Haverhill, MA, the 5,800 square-foot, 180 seat restaurant offers modern American cuisine with unparalleled gluten-free and dietary restricted menus.