I love the look of the pallet wall projects, but lacked the need to attempt anything like that.  Then one day our plumbing in one wall burst and Whalah now I had my need.  The walls in my home our covered in a wall paper that added a nice sparkly pattern when painted over.  Since the whole wall had to come out, my new drywall did not match.  Plus while repairing that wall my husband removed the paneling from above the fireplace and it broke.  Now I had a major reason to cover the wall.  We had some pallet wood so my husband held it up and I did not like it.  Due to this I decided to find a better alternative for my home and decided to do a plank wall. 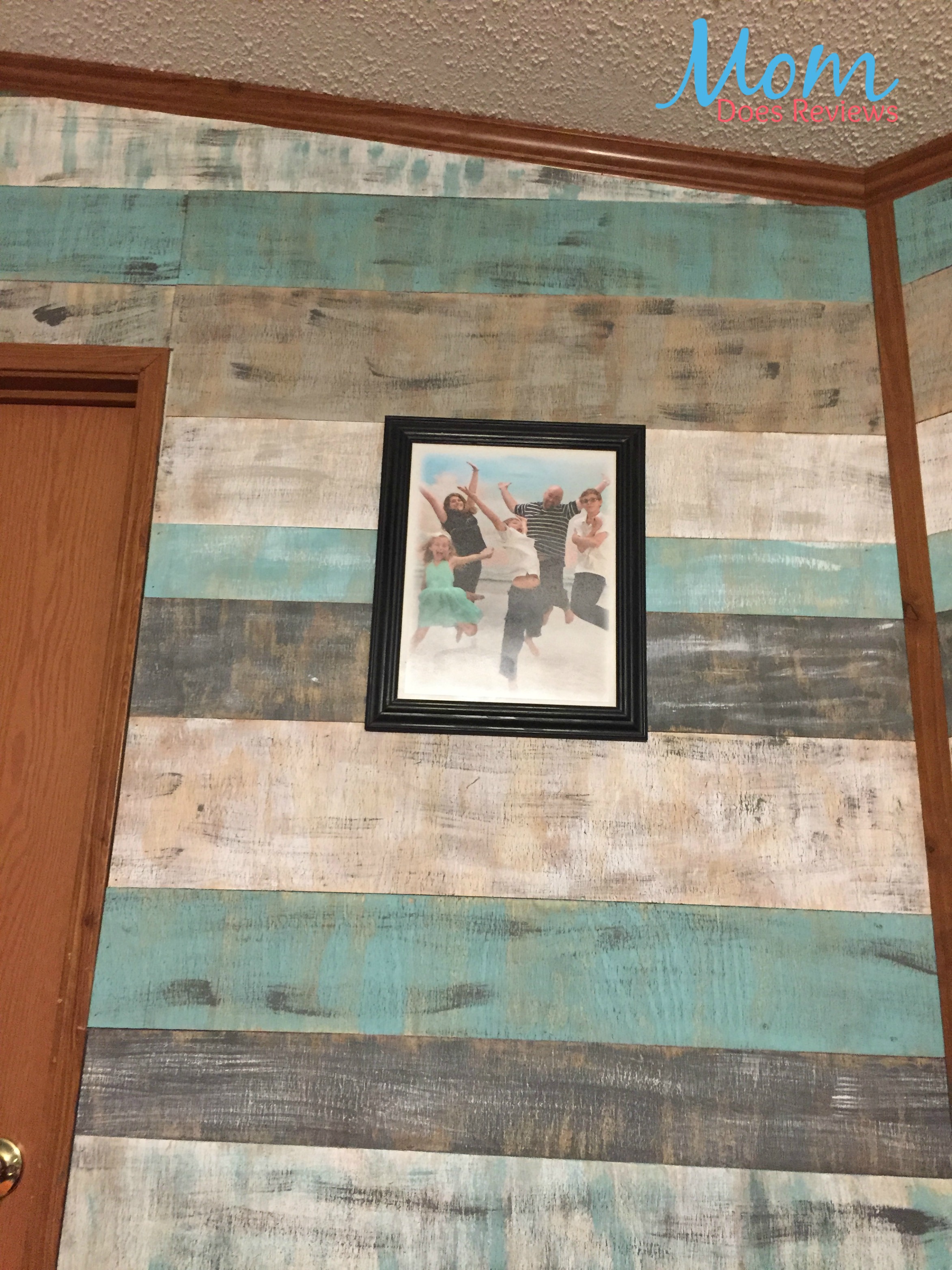 To get the look I wanted with the pallets I would have had to sand and stain them and then try and piece them together just right. Instead I saw an idea of using plywood and some paints to make a plank wall.  This is much more my speed than sanding and breaking down pallets.  The wall I needed covered and the fireplace needed two sheets of plywood, but I went ahead and did another part of the wall as well.  I needed a total of three pieces of plywood to cover it all.

First I had to get the plywood, and Lowes Home Improvement was kind enough to cut it into strips for me.  For each sheet of plywood I had them cut eight-6 inch pieces, four-8 inch pieces, and four-4 inch pieces.  Then I used the chip brushes to dry paint my boards.  I knew I wanted them to be the same color for each horizontal row so I made sure to paint several boards the same way.  I would add a base color to the board in two coats generally painting up and down.  Then I would add an accent color or two and paint side to side. This technique gave my boards a nice weathered look.  The color combinations and looks were quite extensive with only my four colors.  Once the boards were dry it was time to put them up. 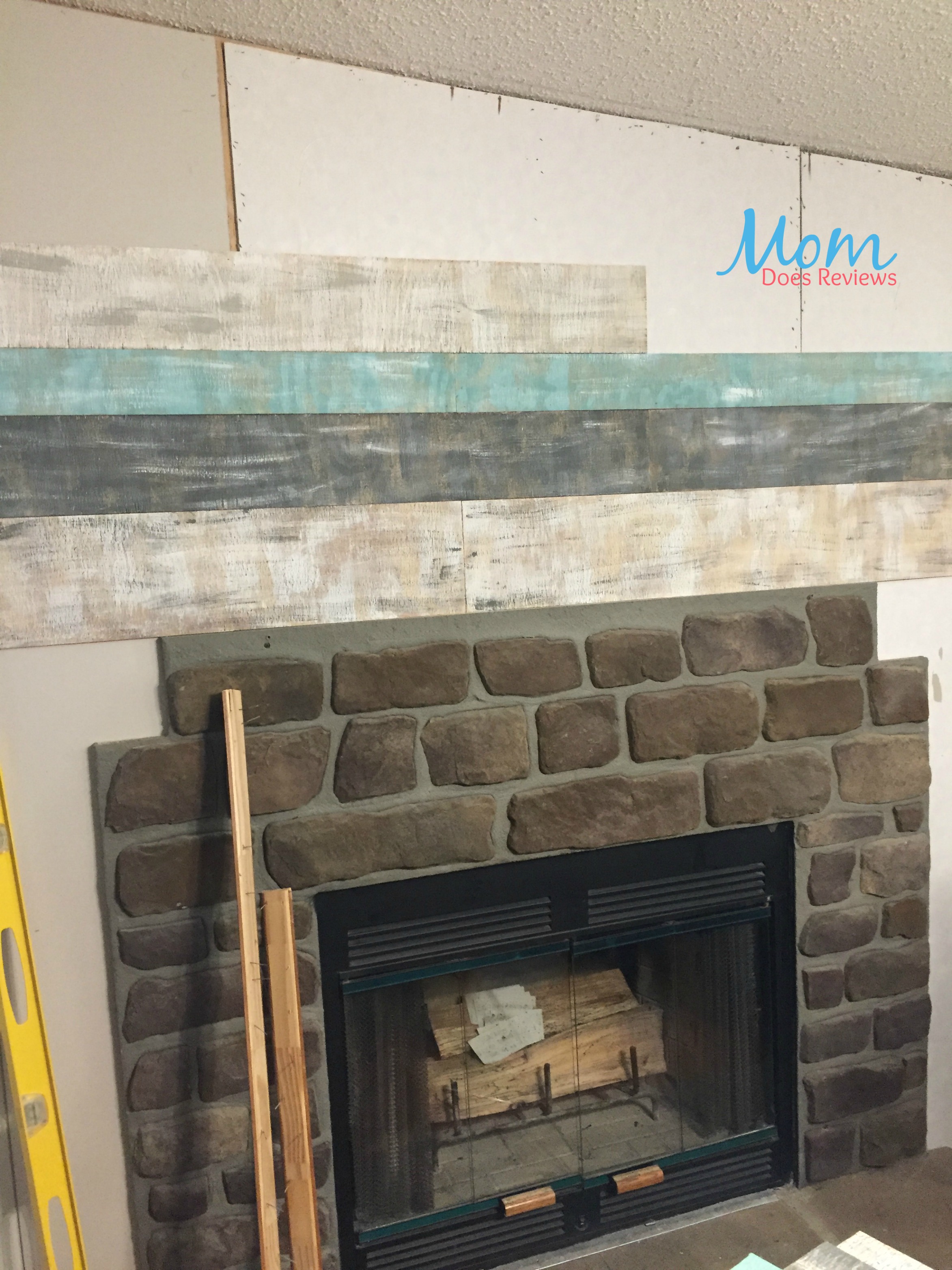 First we had to figure out where to begin.  It was decided that the fireplace would be a good start since it was straight.  The roof is slanted so we would work our way up and over.  I had a sketch of what color and size plank would go where so that I could really utilize the planks in the space we had.  Therefore I looked at my rough drawing and grabbed my 8 inch white piece and held it where it needed to go.  My husband took his nail gun and nailed it into the studs.  You may need a stud finder for this part.  After he nailed them at the studs he did add some extra nails for added support. 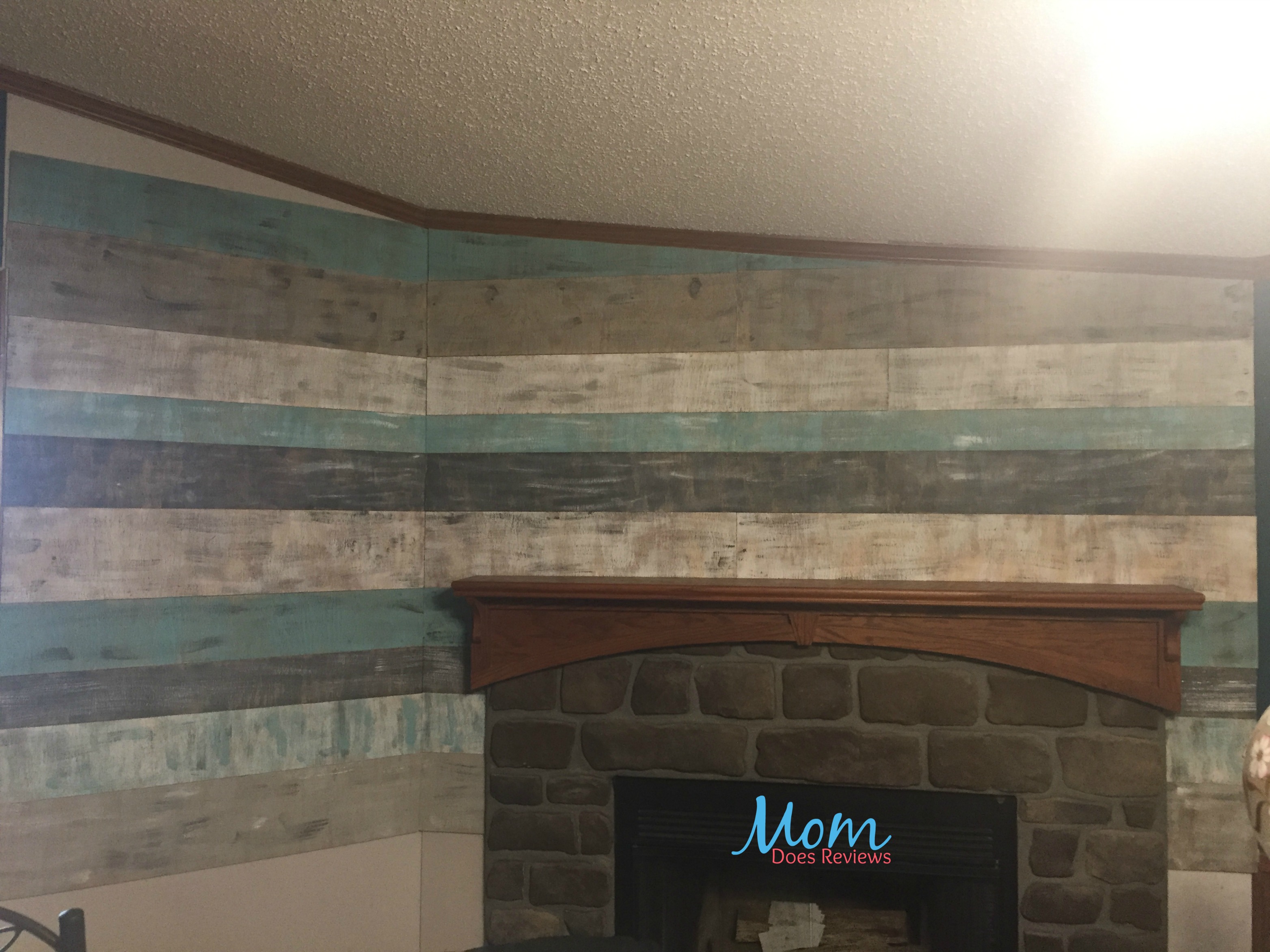 We continued up the wall above the fireplace and then went on to the wall beside it.  The same color was used in each row.  We had to measure and cut small pieces to go on either side of the fireplace.  The pieces of wood against the roof had to be cut with a saw.  We measured in increments and along the wood and connected the dots to form our angles.  There may be more advanced ways, but it worked for us.  Then we cut along our drawn line. 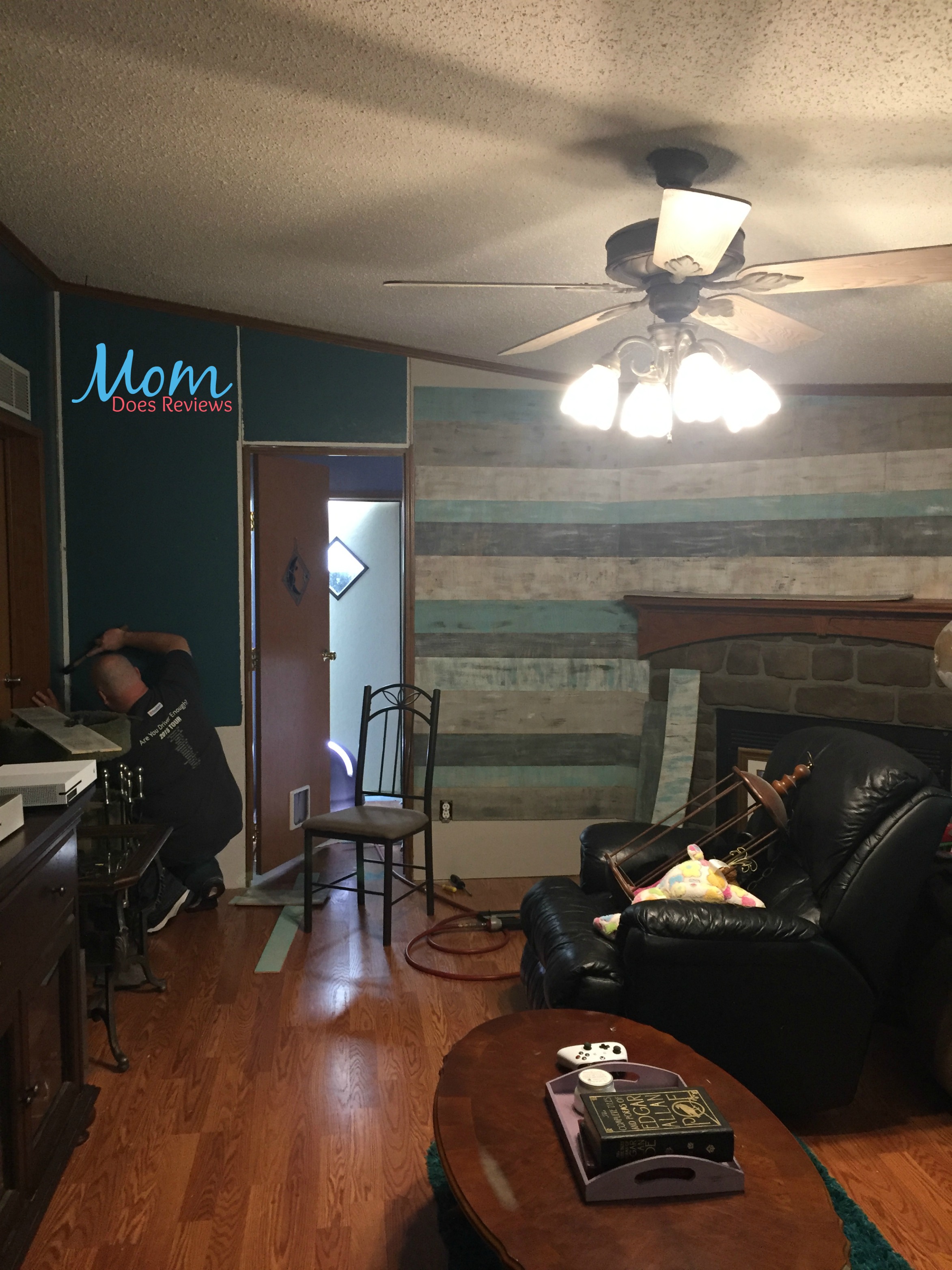 Here you can see that the molding and tack strips had to come off to put the wood on.  Then we continued adding wood and nailing it in. 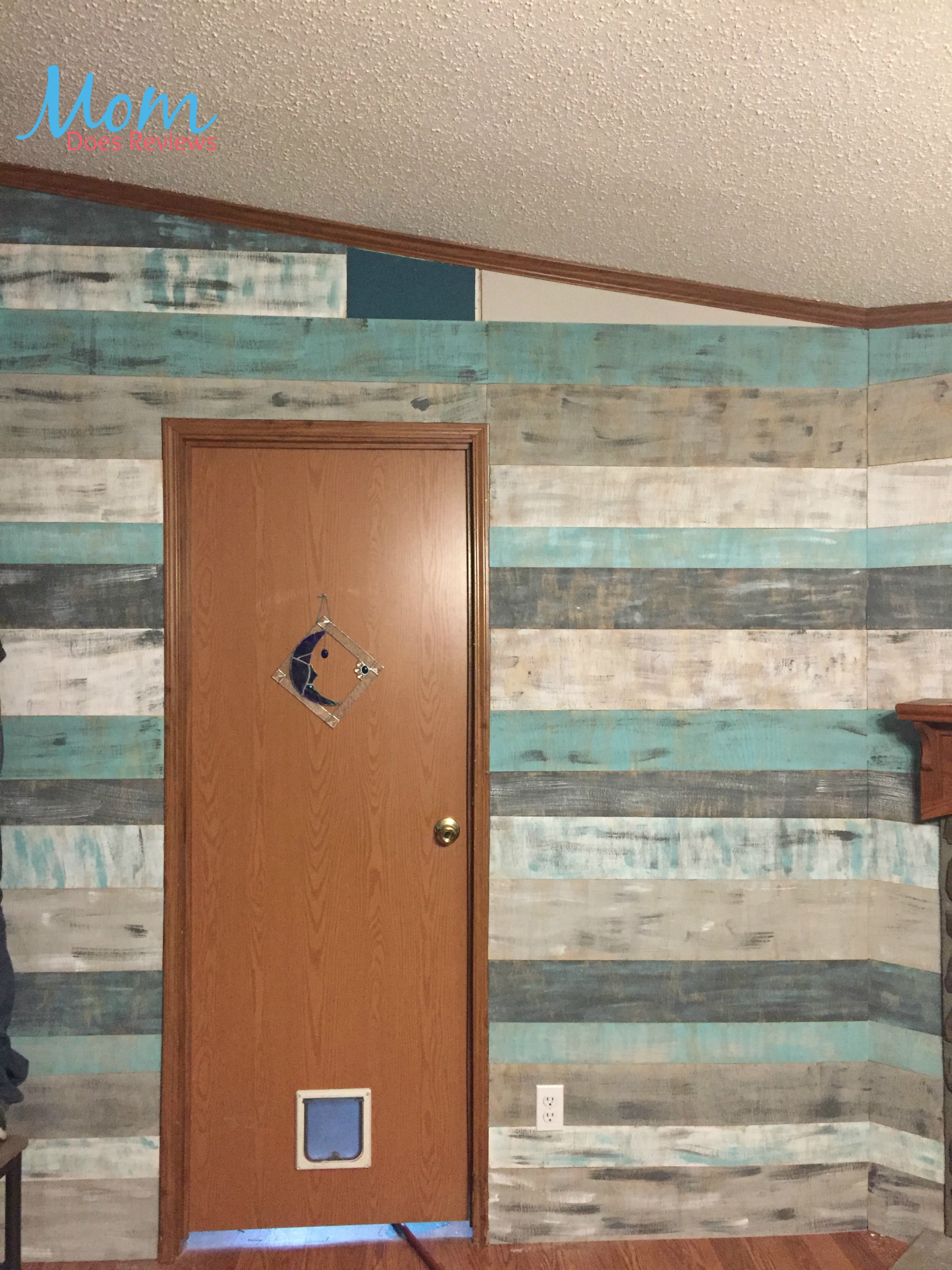 Next we measured and cut again for the pieces that have to follow the slope of the roof.  He also put the outlets back on the outside of the wood planks.  I love the way the wood planks are the same on either side of the door.  It just gives the wall a continuous look that I love.  I did ponder having shorter pieces that did not match, which would create a patchwork effect.  I think that would look really good, but I thought this would be a bigger statement. 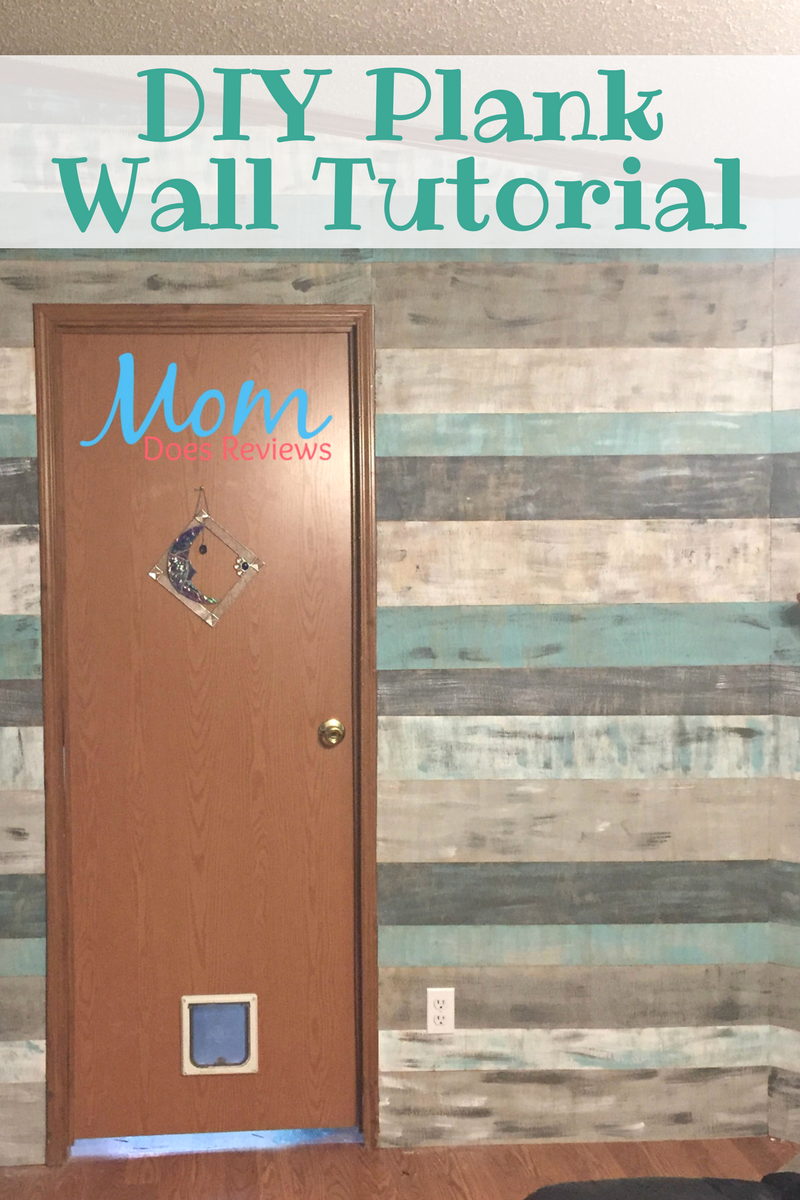 Here we finally finished all the wood.  A smaller area that was square would have been much easier, and quicker, but it would not have looked as great.  I love the way my wall turned out.  It really brought the whole room to a new level.  Due to the colors and wood texture, I really feel like it has a beach vibe.  Throw some driftwood, and starfish into the decor and it would be perfect in a beach home. 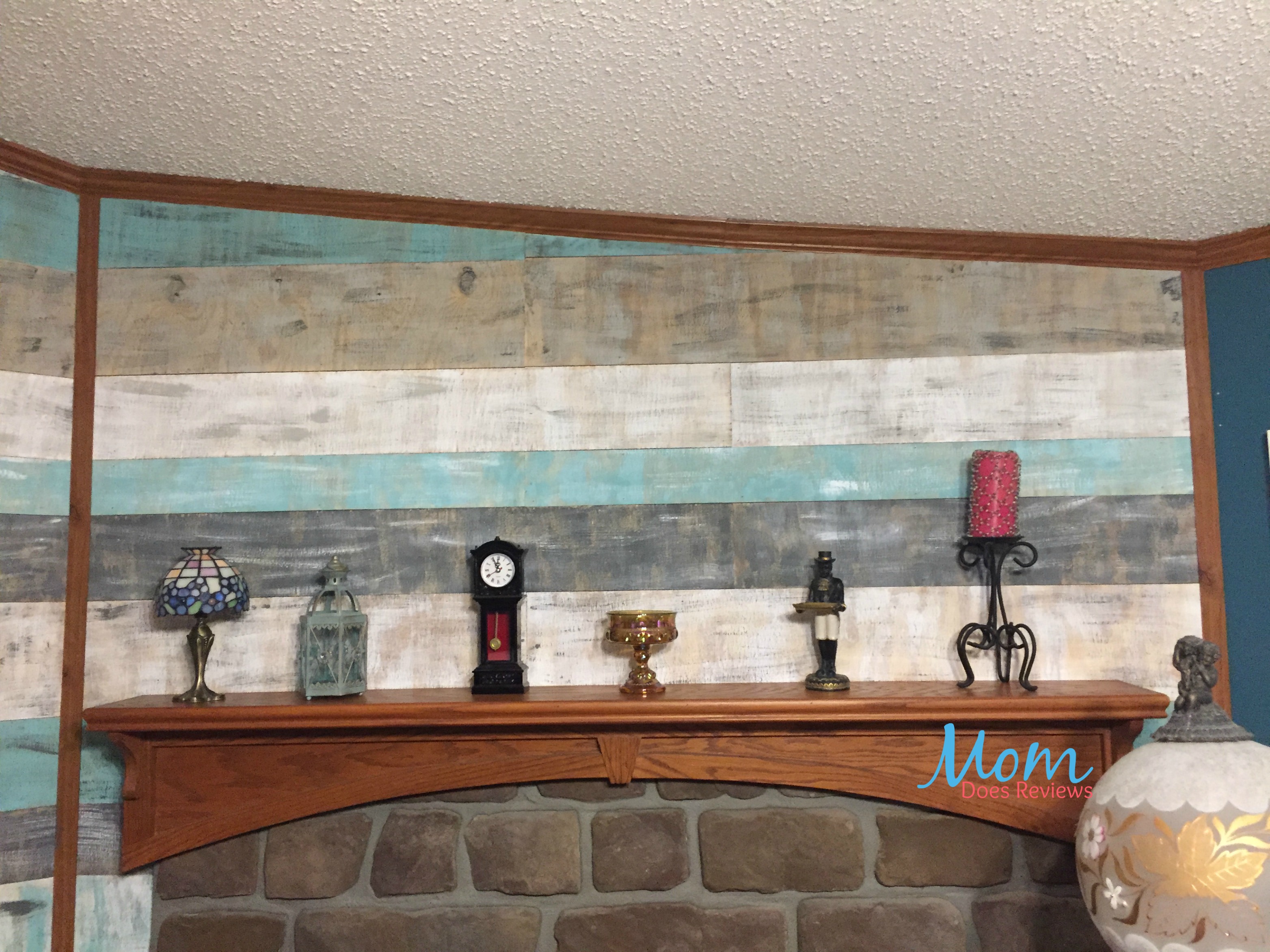 My plank wall was worth all the time and energy it took.  I painted those pieces for hours, but I am so glad I did.  Visitors love it, and compliment it.  One neighbor thought it was treatment I bought.  Most noteworthy is now my best friend wants to do this in her bathroom, so I guess I will be doing it all over again.  The good thing is it is a half bath and the wall is no wider than 3 feet. One piece of plywood should do the trick.

Where do you need a beautiful plank wall in your house?