Never give up until they buckle up!

Every 33 seconds a child under 13 is involved in a car crash in the United States. For younger children, car seats can dramatically reduce the risk of fatality or injury – but over half of car seats are either installed or used incorrectly. For older children, buckling up is critical. A full 50% of children age 8-14 who were killed in car crashes from 2011-2015 were not restrained. 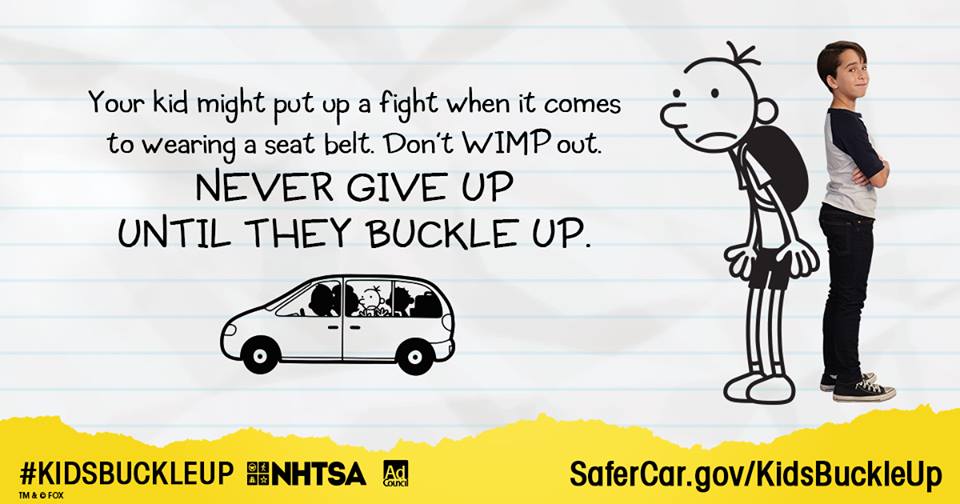 That’s why we want parents and caregivers to know about the importance of making sure their child is safely restrained—whether that’s selecting the right car seat for their child’s age and size, or making sure that older kids (8-14) always buckle their seat belts and sit in the backseat.

As parents, we all want to do the right thing to keep our children safe and sound.  This spring, the Ad Council and the U.S. Department of Transportation’s National Highway Traffic Safety Administration (NHTSA) are unveiling new PSAs to address these important issues.  First, is the up to date car seat safety information like the tips found in the fun new video series “The Wide World of Car Seats.”

When my son comes home with a great report card, everyone cheers for him. Wouldn’t it be great it everyone cheered for us when we found the right and safest car seat?

The right car seat can make all the difference in a motor vehicle crash. And car crashes are a leading cause of death for children 1 to 13 years old.  But despite their best intentions, many parents may not realize their child isn’t in the right seat.  For example, many parents move their children to the next restraint type (car seat, booster seat, seat belt) too soon. To make sure you have the right seat for your child, visit SaferCar.gov/TheRightSeat. 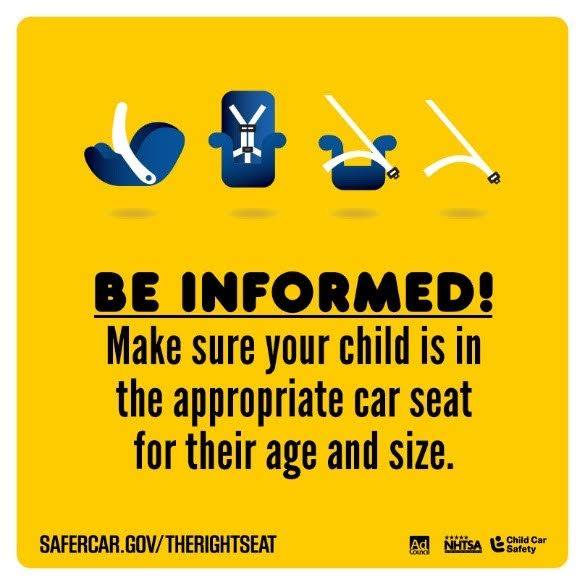 And just when you think you’ve got this parenting thing down, your child becomes a “tween” and you enter a whole new world.  To help with travel safety, the Ad Council and the U.S. Department of Transportation’s National Highway Traffic Safety Administration (NHTSA) are unveiling new PSAs featuring characters from Fox’s upcoming summer road trip adventure Diary of a Wimpy Kid: The Long Haul. The PSAs remind parents and caregivers that even if kids argue and plead, parents should stand firm and always insist that their kids buckle up and sit in the back seat (the safest place for kids under the age of 13).

I can’t even count the number of times we have watched the Diary of a Wimpy Kid.  We even talk about the PSAs about not wimping out on car safety.  My son has always been a rule follower, he wouldn’t let me start the car until he was buckled in. 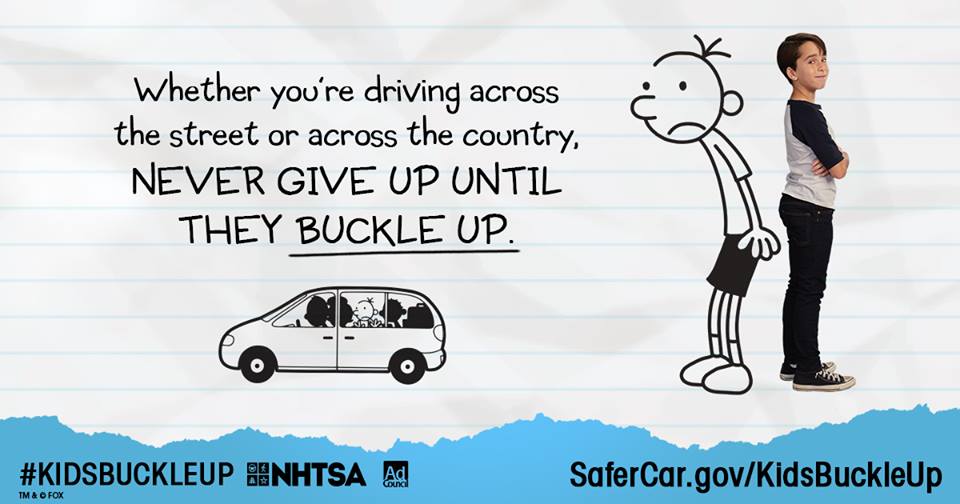 Be sure to talk about seat belts with your children.  My son never needed any training- he reminded US to buckle him up.  He is the first one to remind his friends, even now at 14, to put on their seat belts. What about your kids?  Do they buckle up automatically?

Studies show kids are safer in the back seat.  I remember a friend of mine letting her 5 year old sit in the front seat because they were having a temper tantrum.  I would rather have a cranky kid that arrives alive, wouldn’t you

Per data from the U.S. Department of Transportation’s National Highway Traffic Safety Administration (NHTSA), an estimated 69,000 tweens are injured every year in car crashes and 61% of 14-year-old children killed in 2015 car crashes were unrestrained at the time of the crash.  Even though life as a parent is full of compromises, seat belt safety should never be up for negotiation. That’s why the new PSAs encourage us to: “Never give up until they buckle up!”

For more information or if you need more tips to convince your tween to buckle up, visit SaferCar.gov/KidsBuckleUp.  If you have a great tip, join the conversion on social media using: #KidsBuckleUp.
Spread the love