This morning my toddler was playing with the app ABC Play With Me and learning new words and sounds. It was really cute listening to him trying to mimic the words and sounds he was hearing.  I giggled loudly the first time he made the airplane sound AND when he said “apple tree” for the first time I was completely smitten — it was the cutest thing I have heard all week!  My husband and I sat there listening to him in complete amazement.  Watch the app demo video below to see what he was learning:

The ABC Play With Me app has everything I look for when
it’s time for a new learning game for my preschoolers.

The ABC Play With Me app has everything I look for when it’s time for a new learning game for my preschoolers. The animated main menu attracts the children’s attention very quickly.  They can actually navigate the app themselves which is really important for them (and me) because it feels like part of the games.

On the main screen your child is given the option of EIGHT DIFFERENT GAMES to play. Play ABC’s, numbers, balloon pop, animal letter eating, matching game, a train animal shadow matching, animal sounds AND another ABC game.  That’s a lot of fun in one app!

Fun way to learn ABC and numbers with animations.

About ABC Play With Me:

ABC Play With Me is an interactive alphabet and number learning educational game for preschool kids, toddlers and babies. This game contains more than 300 Interactive animations, instructive mini games with educational puzzles, real nature sounds and voices of professional actors. Kids can play through interactive scenes as they learn the letters of the alphabet. ABC alphabet game will teach phonics and prepare your kid for school. You can even use Montessori phonics principles to teach ABC for your preschooler with this game. Game helps to improve memory, attention and concentration in a fun way.

The ABC play with me app features alphabet letters A to F for free, parents can purchase the entire alphabet and additional content through in-app purchasing. Game is designed in a way that you can still browse all the alphabet scenes not having premium access. App teaches the ABCs by having interactive scenes that are covered with objects all starting with a specific letter. The letter A will have apple, airplanes, acorn etc. The letter D will be chock full of dragons, drums, dog etc. Overall each letter in the alphabet includes cute images that are tappable and will say the word of each image. In other words it’s cute, interesting and interactive way to learn ABC.

Let’s start with the ABC game. This game begins at the letter “A”. On the screen is a scene with several items that start with the letter “A”. Clicking on the item will prompt the app to say the name in a very friendly voice. If your little one is like mine, he/she may even repeat what they are hearing — “apple tree!”  The game continues this way with the preceding letters of the alphabet. 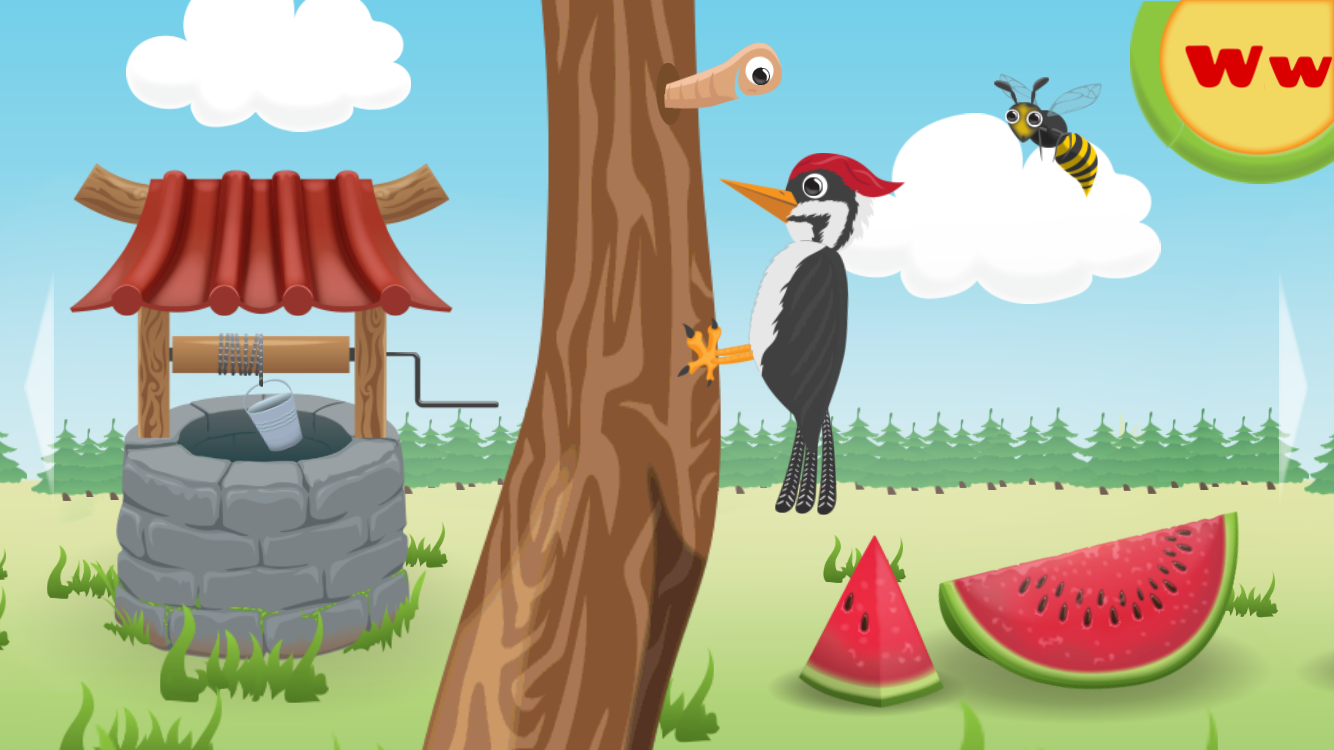 Pop goes the balloons! This fun game teaches your child hand-eye coordination by having your child pop a rising balloon with letters attached to it. Once your little one pops the balloon, the letter is spoken.

Hand-eye coordination and letter learning in one game — very awesome!

Let’s get to counting! With some cool animated pictures your child is given a certain number of items on the screen with a number beside it. When he/she presses the button it says the number. What I found neat is that on the picture itself, if you touch the objects, it counts each one. For example (see photo below):  there are four puppies, touch each one and it counts each one aloud. 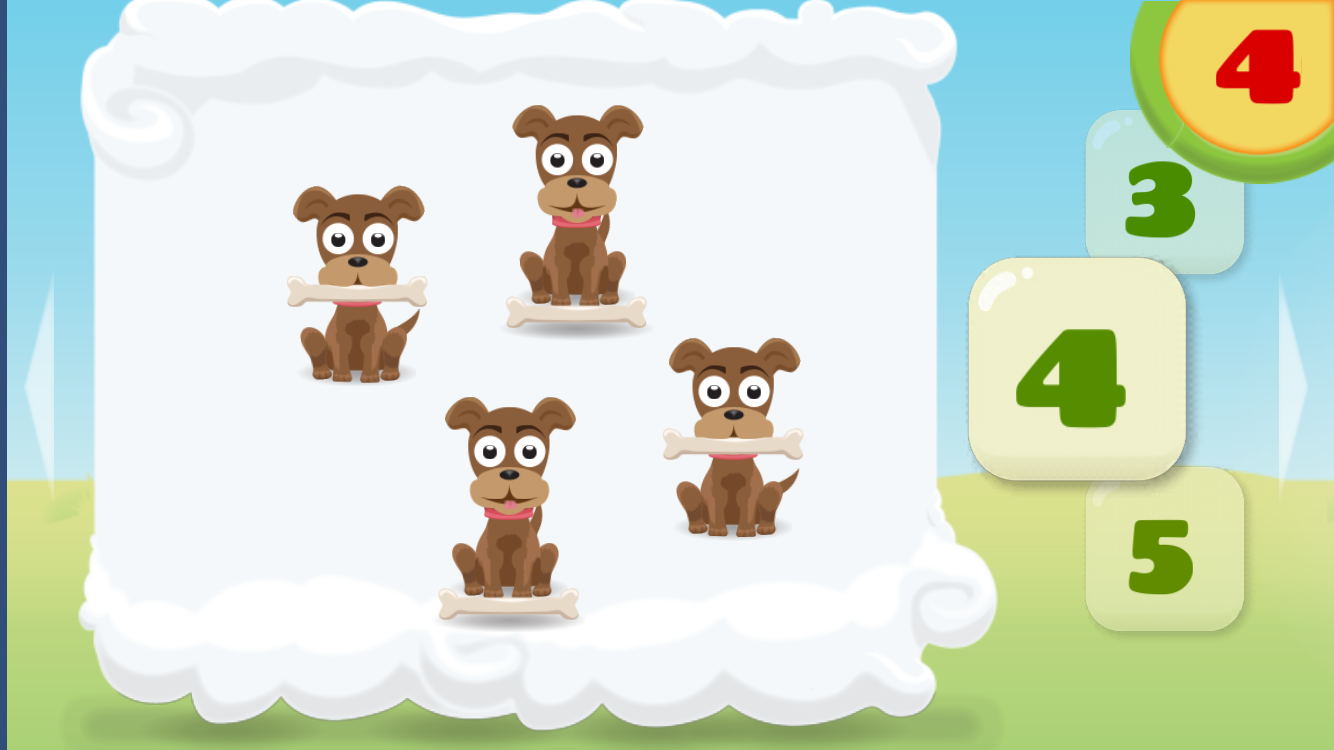 An all-time favorite child game is a game of matching. In this adventure you are given several cards with animals on them. Find the matching pair of animals and your child is rewarded by hearing the sound the animal makes! The pictures on each card is animated and makes this game that much more fun!

All kids love animal sounds (this was our toddler’s favorite game). Your child can choose from several animals and hear the noises that the animals would make. I love the easy navigation for the different pages of animals.

Feeding the animals is always fun too! (See photo below) Feed the animal the food with the corresponding letter that appears on their bibs. Once your child matches the right letters, the app tells you what letter it was while the animated animal eats it. This is a fun game with lots of learning skills incorporated within. 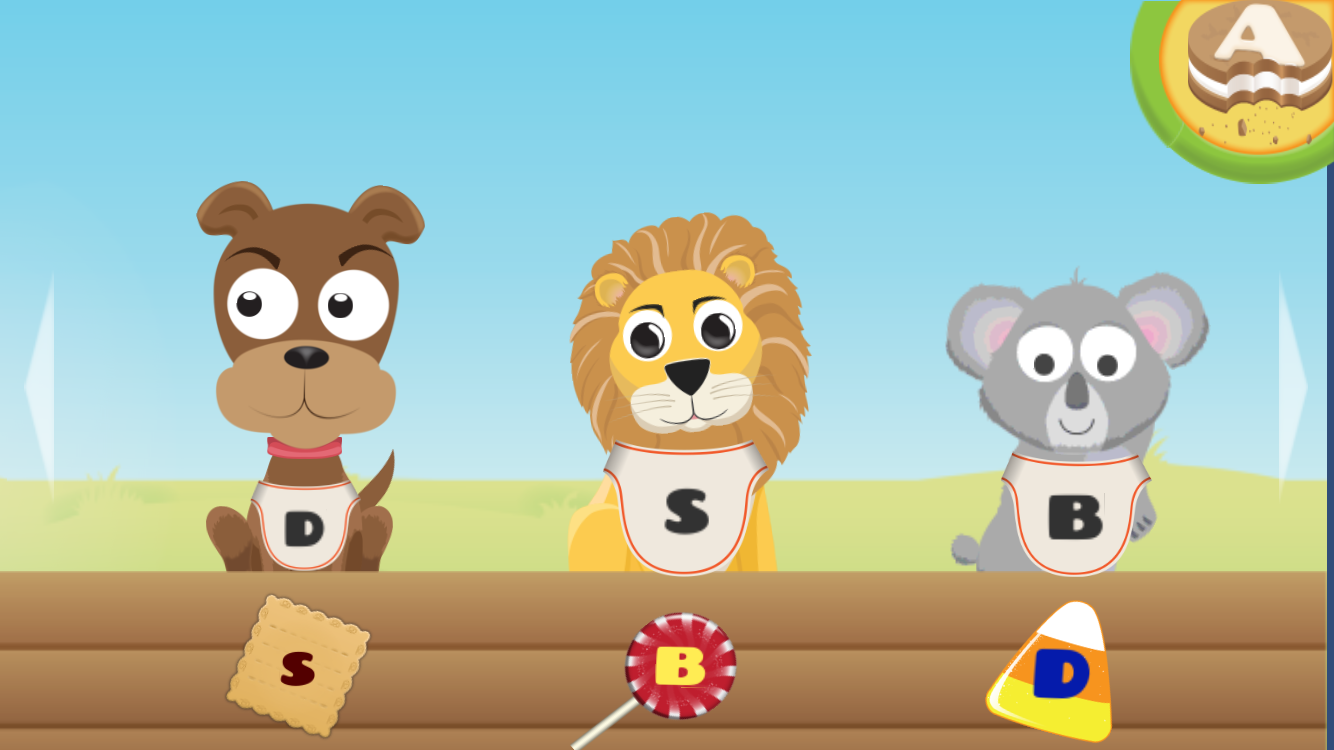 All Aboard! Time for all the animals to board the train. The cart on the train has a silhouette of animals. Match the animal correctly and it will say the name of that animal. Match all three and the train whistles and leaves the screen as a new train appears.

The last game is another alphabet game. This game is a more advanced than the first game we discussed. Five letters will appear on the screen and the child is prompted to find a certain letter. After they find the right one, a new setup appears.

Overall I was very impressed with the ABC Play With Me app. The animated characters are fun and the easy navigation was impressive. The combination of skills in the games was great and I’m looking forward to watching our toddler (in amazement) continue to learn new animal sounds, words, letters and numbers with this app! 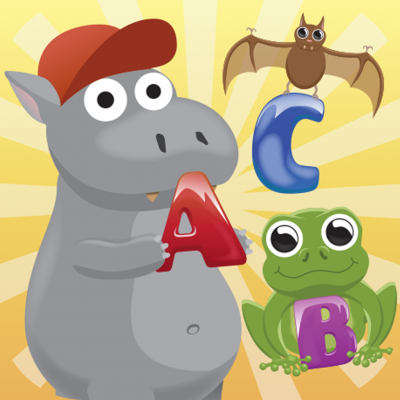