If you are looking for a magical experience that your whole family can enjoy, Medieval Times is the place to go.  This dinner show takes you bake in time to medieval Spain where knights are fighting for the Princess.  You are immersed from the very start with beautiful scenery and decoration, all in a castle.  There is something to appeal to every age of child to adult.  My family really loved the show and were so thrilled to go. 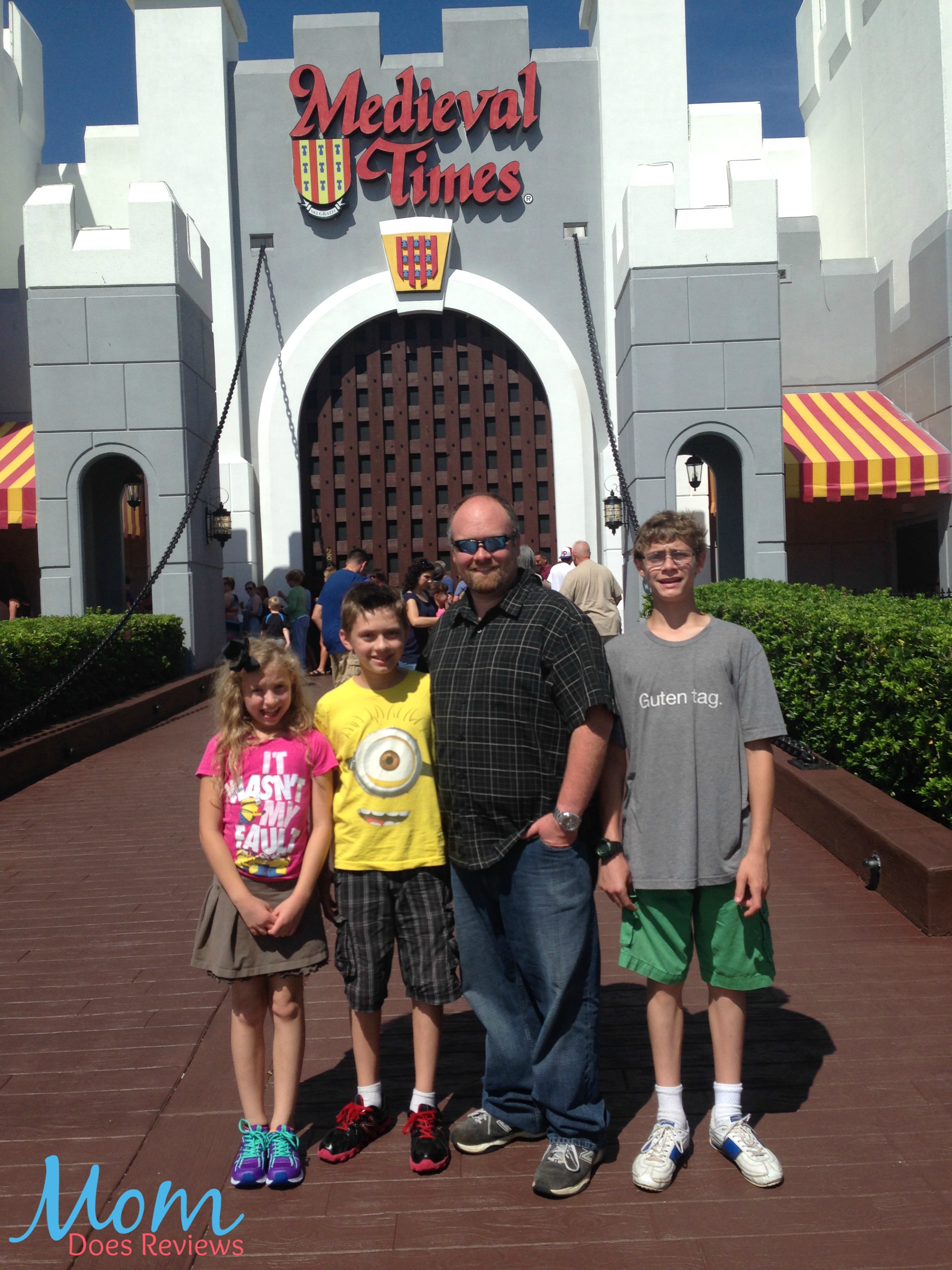 Here you can see the awesome exterior of the building.  My kids were asking questions about the thick chains, so we got a quick lesson in drawbridges of ages past.  We went in and after the ticket booth they assigned us our seat and Knight.  We were on the team of the Black and White Knight, and we got black and white paper crowns to show that.  Then we entered into a large area where we could take pictures of the decor and each other.  Plus you could purchase drinks in neat collector cups, swords, light up toys, and crowns. 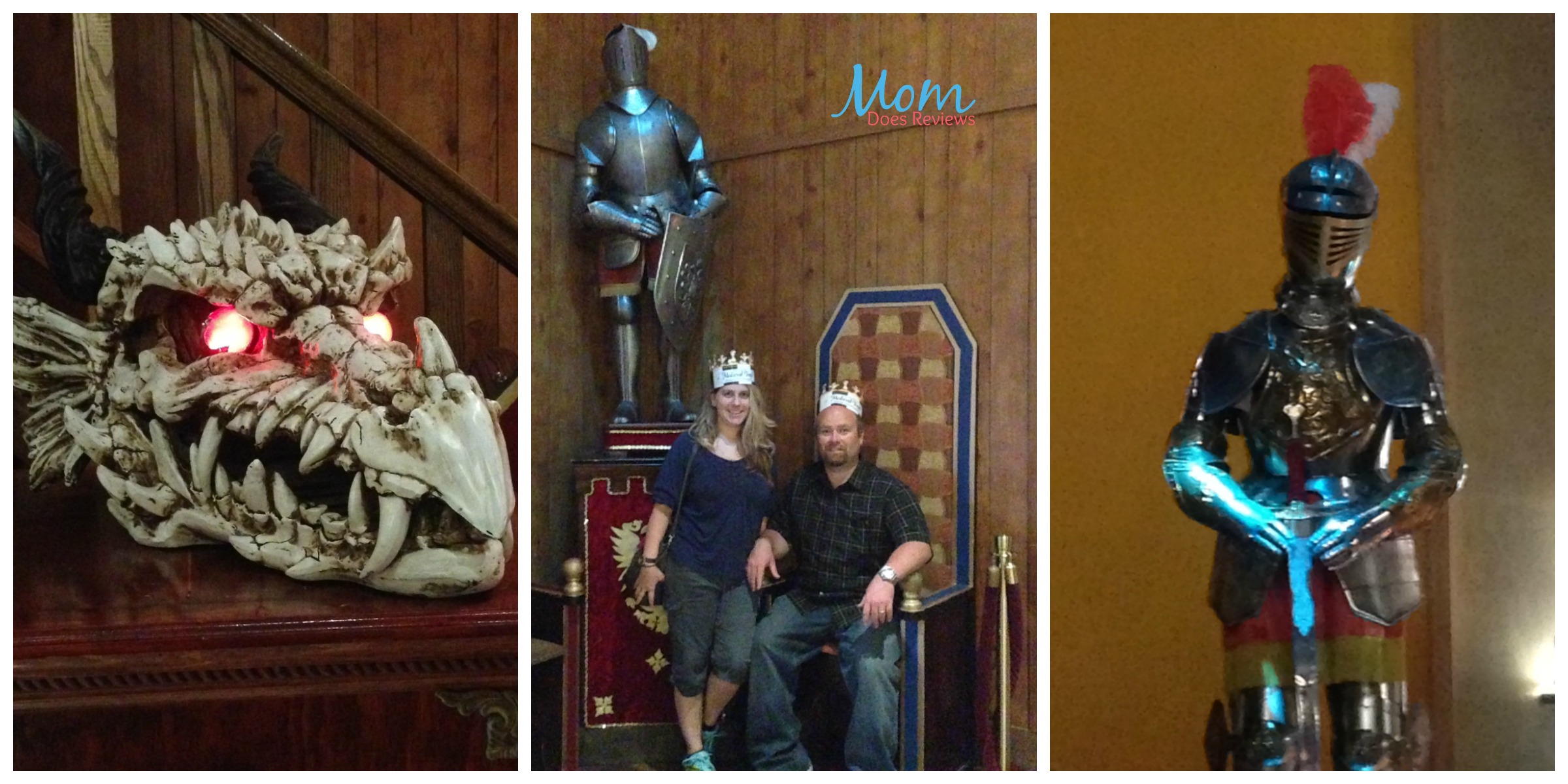 The whole area was really put together well.  Murals adorned the walls, and the employees were dressed in period attire.  They also played their part well, and spoke as they would have from that era.  There was a falcon and her handler out there to see and take pictures of.  They use a  falcon in the show, and it was amazing to see one up close then later to witness her flying above us at the show.

When it was almost showtime they started letting people in to be seated.  Each Knight had their own section and the lights in the area reflected the color of the Knight.  We were Black and White, but there were five other colors.  Our allies were the Red Knight and the Yellow Knight.  Across from us in the arena were our enemies: the Red and Yellow Knight, Blue Knight, and Green Knight. 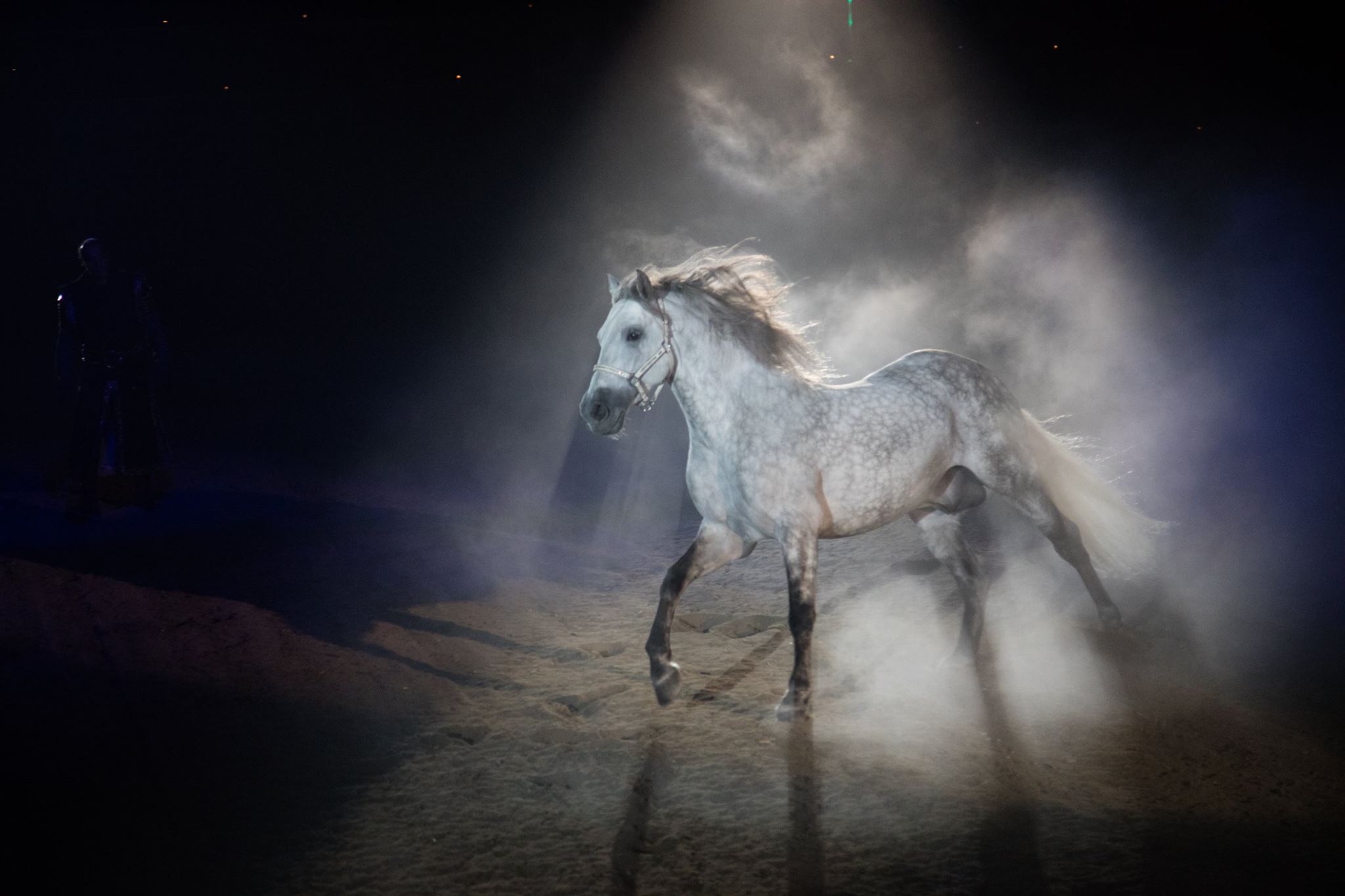 The show started with a beautiful horse that was running through the arena.  It showed off its beauty, grace, and training.  Then other horses came out and did some great tricks.  These creatures were amazing and quite a site to behold.  I think I would have been content to watch them all day. 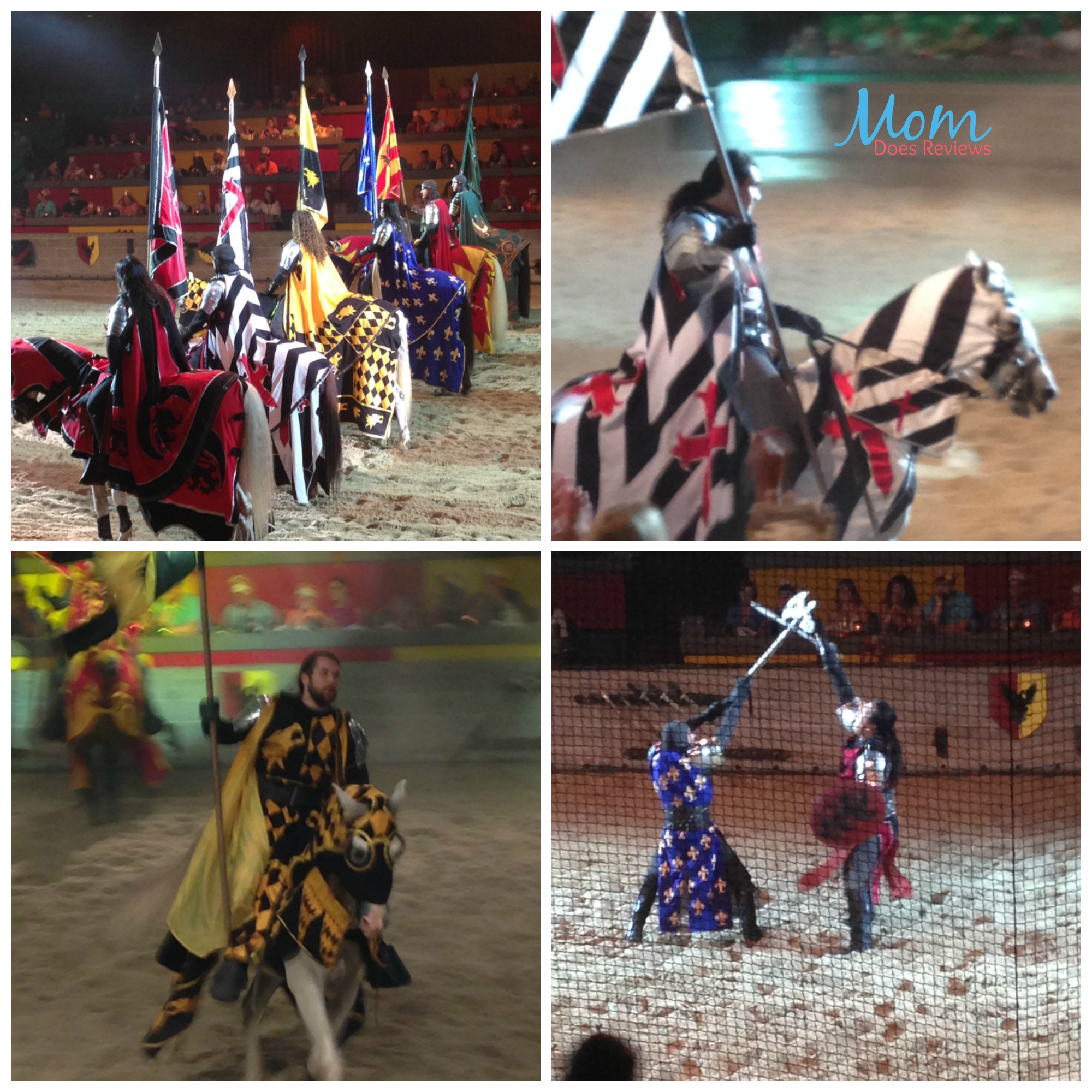 While we were engaged in an epic show of beautifully trained horses, heroic knights, and good versus evil, they were filling our plates with a feast fit for royalty.  Our dinner started with tomato bisque soup and garlic bread.  Then each of us got half of a chicken.  My ten year old daughter was astounded at the amount of chicken she received.  It was so funny to watch her reactions to the food and the whole experience.  We also were served corn on the cob, and a half of potato.  Then a warm apple turnover was served to finish the feast.  All this had to be consumed with no utensils, since they did not have forks and knives back then, what fun!

The food was very delectable, and we thoroughly enjoyed it.  The potato was a huge favorite since it was crunchy on top and seasoned very well.  Due to the amount of food, I was glad they had to go bags.  There was no way I was finishing it all, but my husband managed to. 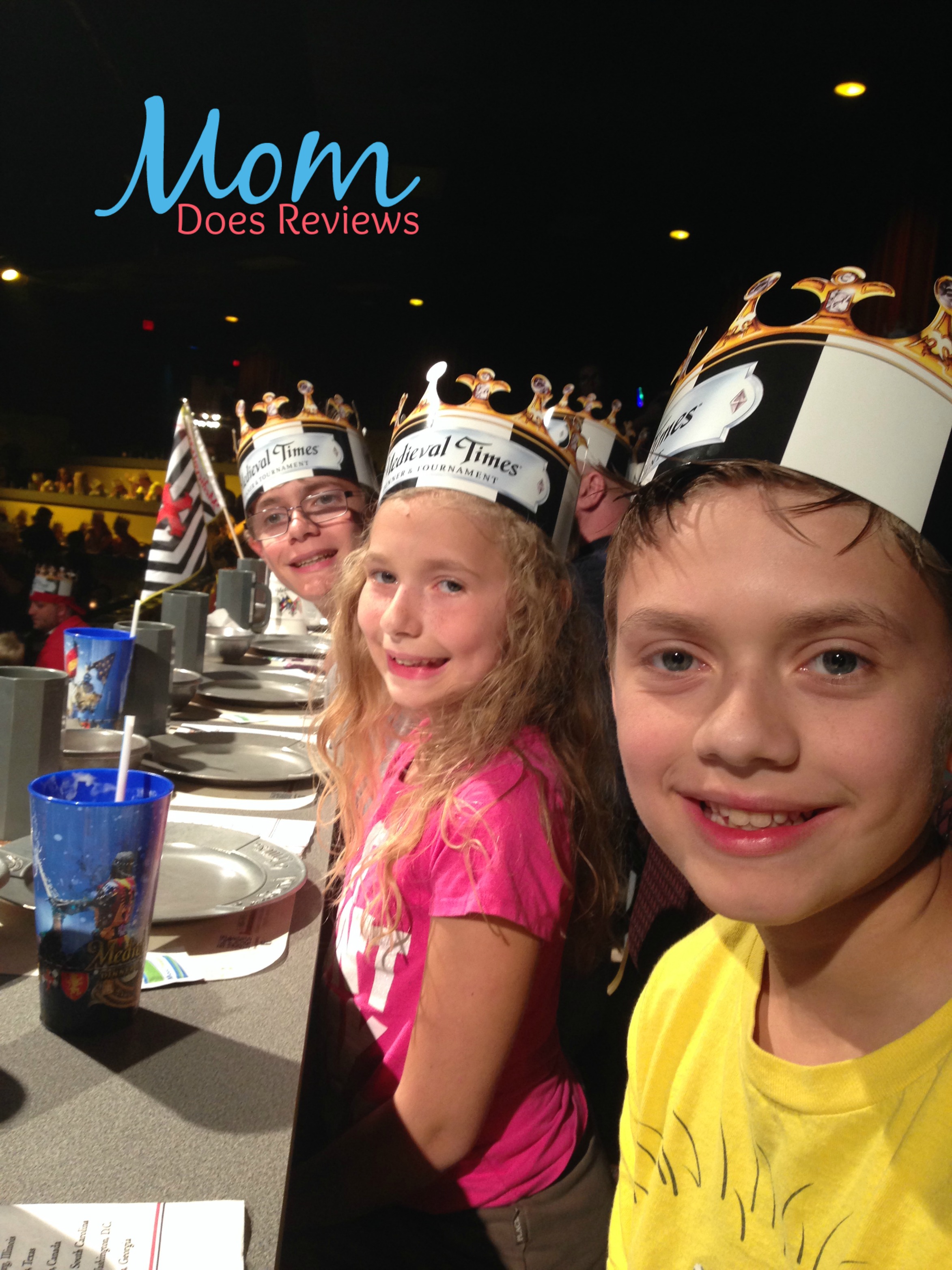 The costumes of the horses and knights were so beautiful.  My daughter loved all the horses and kept oohing and ahhing  about how pretty they all were.  She also liked the Princess and wanted a picture with her.  My sons liked the weaponry best.  The Knights jousted on horseback then got down to fight with weapons.  They were using swords, battle axes, and maces.  They were hitting hard and sparks were flying.  It was amazing to watch their skill with the weapons.

The Knights in the tournament had different tasks to accomplish and if they achieved their goal the Princess gave them three carnations to give to the audience.  My daughter was thrown a red carnation and she was so happy.  What a great way to engage the audience and to make the girls feel like princesses! 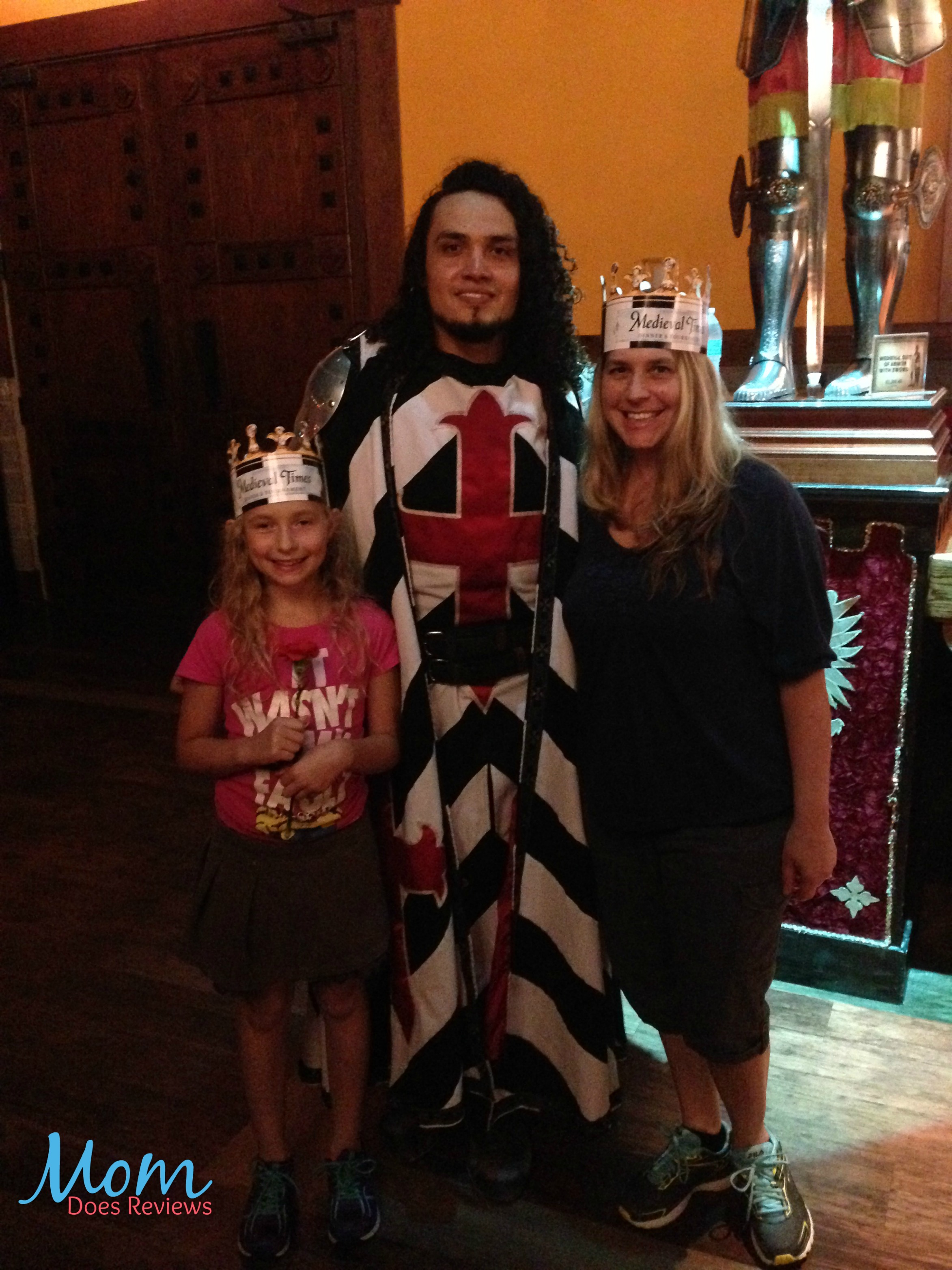 Sadly our Knight did not win, but his ally did.  After the show the knights, the King and the Princess all went out to the first room to take pictures.  We got a picture with our Knight, and you can see the carnation my daughter caught.  She also got a picture with the Princess.  It was so cool to get to talk to the stars of the show.  The only thing that I would have liked more would have been to pet the horses, LOL!   I absolutely love horses, and the breed varieties they had was a feast for my eyes. Since they had the hardest job of the whole show in my opinion, they were probably resting.

Medieval Times put on a fantastic show and served fabulous food.  If I lived closer I am sure we would go there again.  We are about 3 1/2 hours away from our nearest castle, but it was well worth the drive.  When we get out to Myrtle Beach again we will surely journey back to the castle.  The memories we took with us will last a lifetime.

When will your family take a trip to the past with Medieval Times?