Disney sent me on an all expense paid trip for the Red Carpet Premier of The BFG and DisneyXD Future-Worm! Screening.  All opinions are 100% my own.

If you love time-travel, smart kids and amazing graphics, you will love Future-Worm!  I had the best time at Disney Toons Studios learning all about Future-Worm! and how it came about.  I have to admit, I thought it was going to be my least favorite part of the trip, but it ended up being one of my favorite parts! 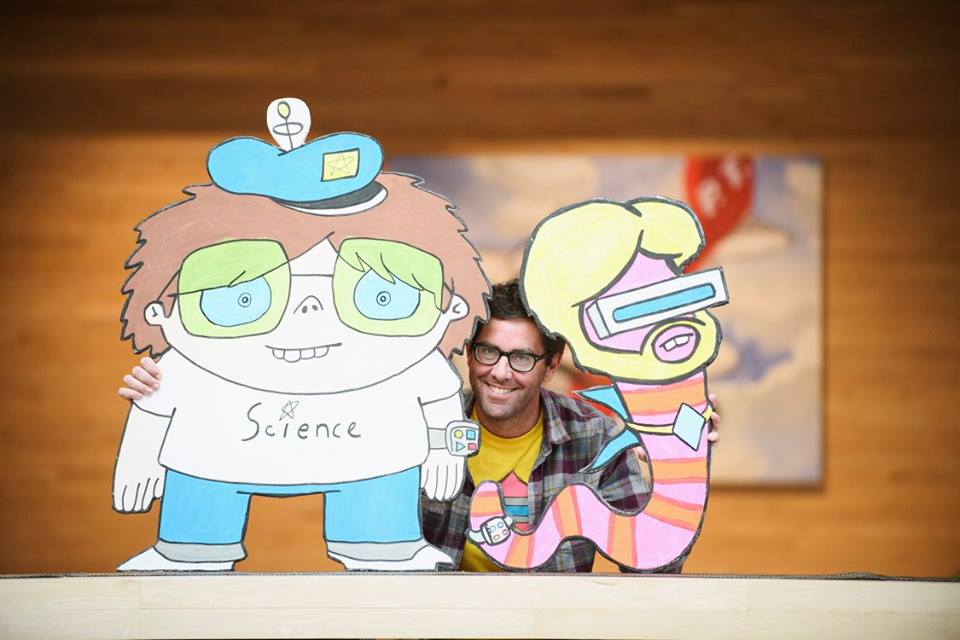 In this animated comedy adventure, an optimistic 12-year-old named Danny Douglas creates a time machine lunch box through which he meets and befriends Future Worm, a fearless worm from the future (with titanium-enforced abs). Together, the duo embarks on adventures through space and time. 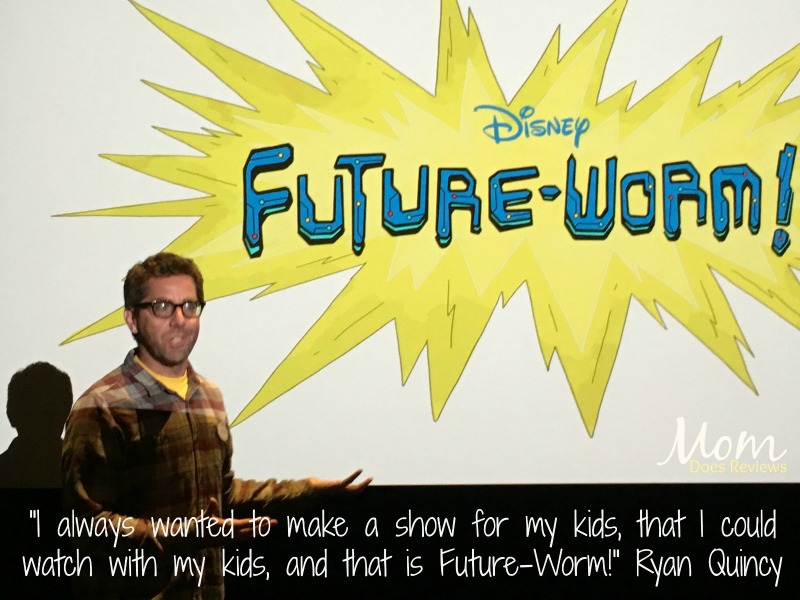 The Future-Worm! part of my trip was one of my favorite parts!  We not only got to be one of the first groups to screen the premier episode, but we got to meet and chat with Ryan Quincy and the other artists.  They even gave us our own Time-machines and customized them too! 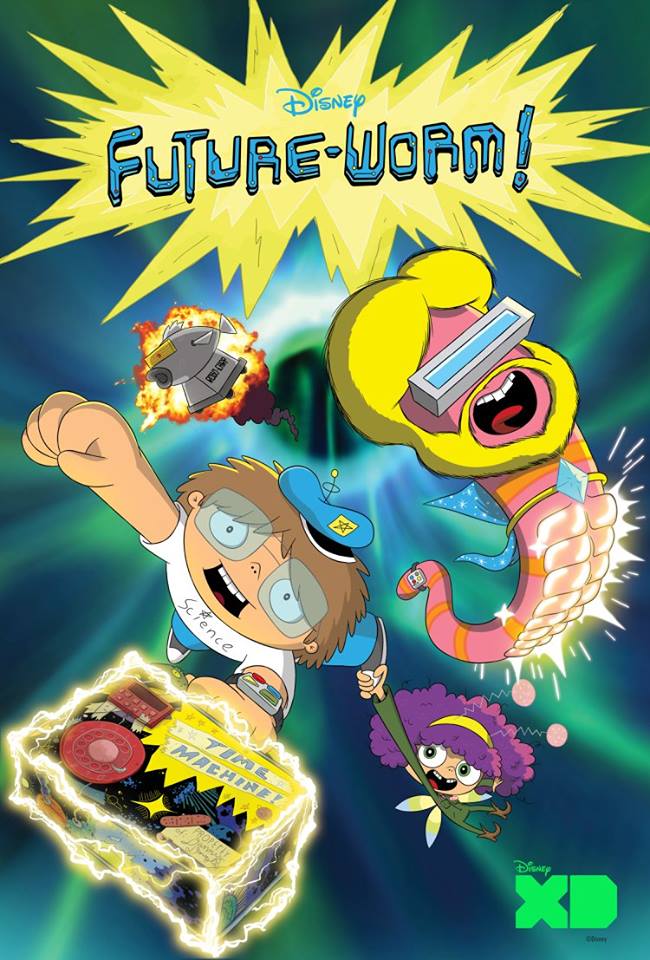 We asked Ryan about the origin of Future-Worm!

“Danny created this time machine lunchbox, sent it so far into the future that these future scientists found it, opened it up, and some of Danny’s lunch was in there, there was an apple in there that happened to have a worm in it.  They put it through their genetic escalator, and gave him all these attributes (the bulletproof beard, the photoreceptor visor, and the 24 titanium-enforced abs). They sent Future Worm back to hang out with Danny. That, in a nutshell, is how they met.”

It’s really interesting and genius, how they came up with all of that.  He even gets help from his kids!

As the story goes, only child Danny Douglas hoped to find a worldly, thrill-seeking friend with whom he could venture out and see what the world has to offer. Future Worm, who amassed a wealth of experience during his travel through time, longed for a home and family. When Danny’s lunch box invention brings them together, the kindred spirits dive head first into their adventures, both at home and through time, usually unaware of the consequences. 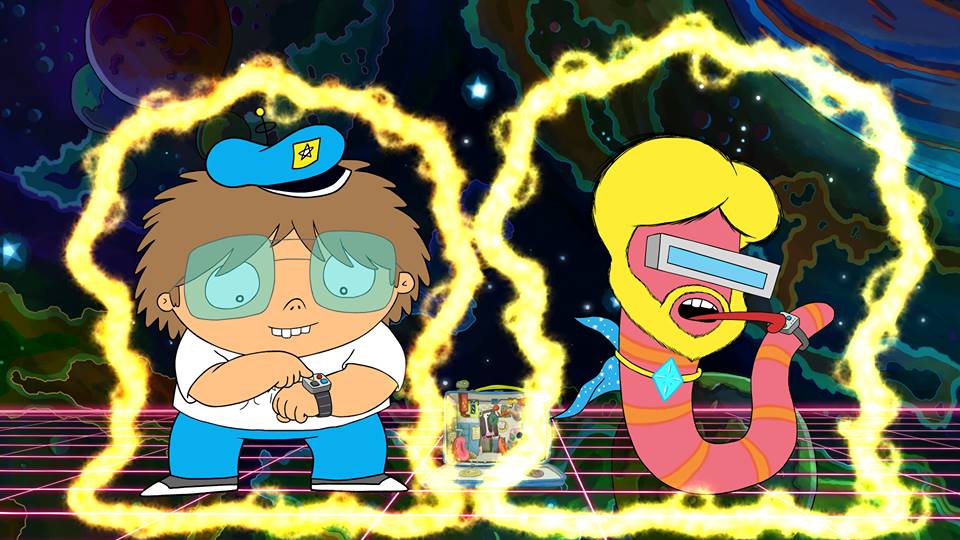 The Douglas family takes Future Worm into their home, providing him the family he’s always wanted. Mom Megan Douglas is a loving and scatterbrained toy inventor who inspires and encourages her son’s creativity, and dad Doug Douglas is an overly cautious stay-at-home dad who while not mechanically inclined, is supportive of his son’s inventions. Danny’s close friend, Bug, a smart and scrappy 8-year-old girl with a high mechanical aptitude and confident spirit, lives in the junkyard across the alley from him and occasionally joins their adventures.

What is your inspiration behind Future-Worm!

“I always loved time travel and adventure shows, and I’m good friends with Justin Roiland, who did Rick and Morty, and when we were talking i said I think I want to do a time travel show.” 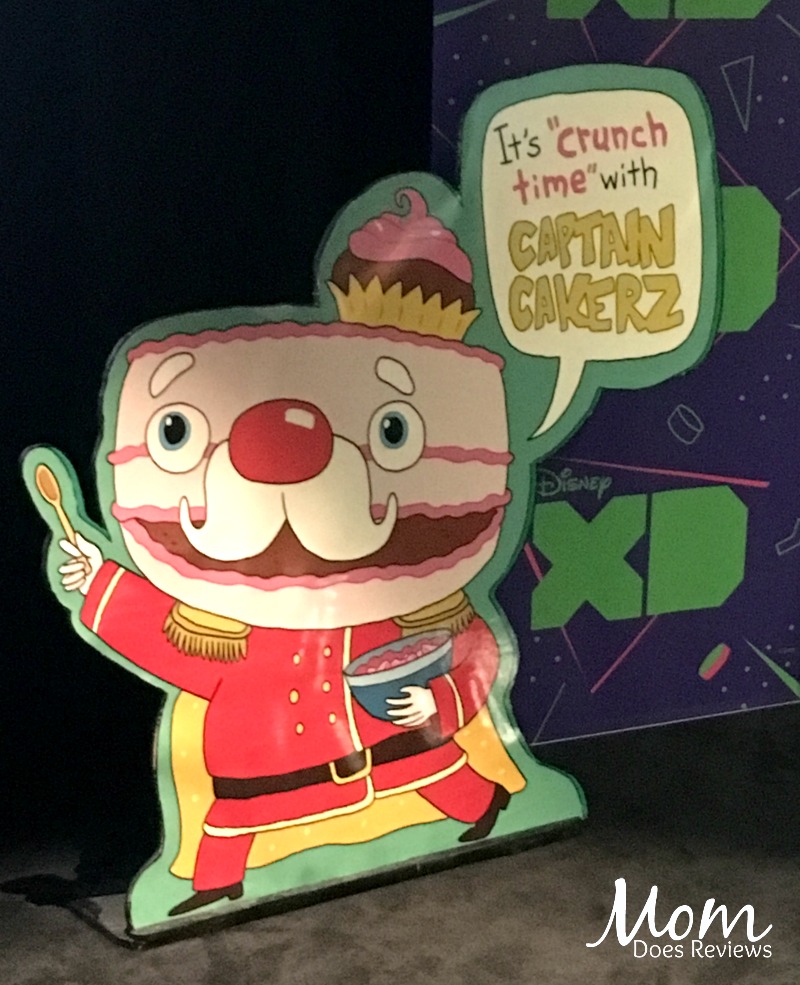 Who came up with Captain Cakerz and will be see it in every episode?

“We thought it would be funny if it was a cereal that tasted like birthday cake or anything that is ridiculously bad for you.”

Ryan said that Captain Cakerz will be seen throughout the series. “There’s an upcoming episode where they go into the future and visit the haunted Captain Cakers factory.” 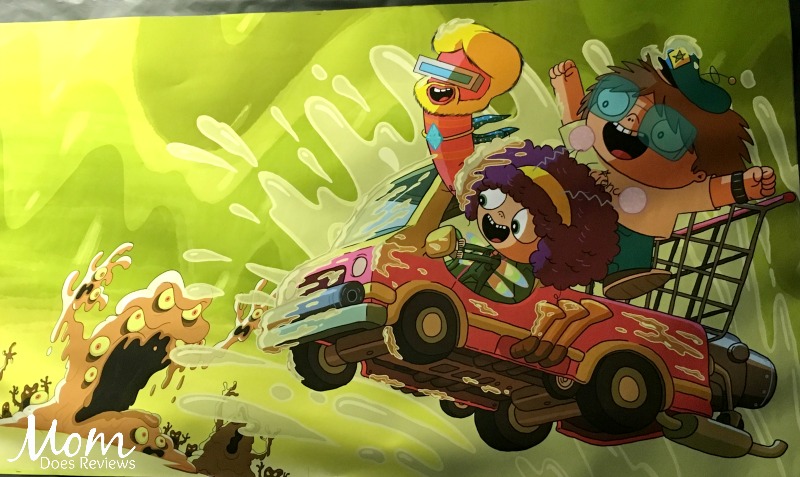 I really enjoyed the female character Bug.  I asked Ryan if we will be seeing more of Bug in future episodes, he gave us an answer I didn’t expect:

“That’s kind of the big frustration for her.  There’s sort of this prophecy that a future version of Danny comes and says, you can’t take her into the future, because when she goes in the future, the whole universe implodes.  So she’s really frustrated.”

Did you have a design in mind for the characters?

“It started with just the name, Future Worm.  That just sounded funny to me.  With the name Future Worm, he has to be a time traveler.  So it just started there, and I started thinking about the stuff that I loved as a kid, like I loved pro wrestling, I liked Hulk Hogan, Macho Man, Ultimate Warrior, Mr. T.  Chuck Norris -all that stuff got thrown into the suit.” 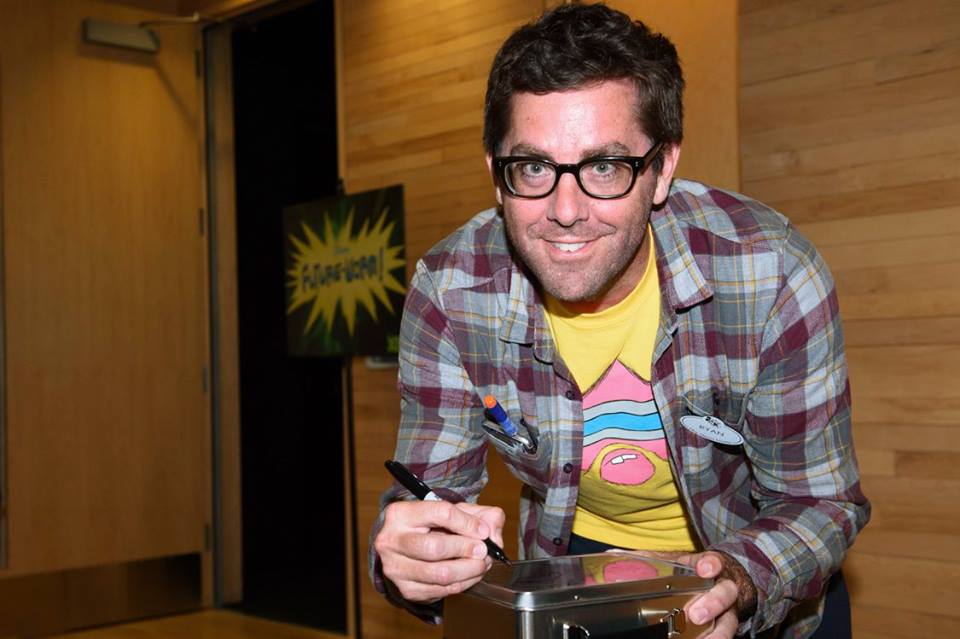 We asked what you want kids and parents to get out of Future-Worm!

“Acceptance, and just family, and best friends, and celebrating, celebrating that.  I think that’s what we set out to make a show that kids can watch with their families.”

They certainly succeeded.  Future-Worm! is a show I would watch with my boys.  It is just pure silliness and will keep both kids and adults laughing.   Be sure to keep your eye on Robo-Carp!  He did some fun moves when I saw him.

Ryan was asked how they come up with ideas for each episode:

“There are no rules.  It’s a time travel show, but  that’s more of the backdrop.  It’s more about these two best friends.  Future Worm has seen everything, he’s been everywhere. He could hang out with anyone in any time period, and he chooses to hang out with Danny.  And that says a lot about Danny’s character.”

I LOVE that a show can be about best friends- friendship is such an important part of growing up.  Future Worm and Danny’s relationship is not only about friendship, but loyalty and embracing their differences.  They show us that anyone can be friends, no matter how different they are.

Do you love the Time-Machine as much as I do?  We were very lucky to get one of our own.  One of my favorite parts of the Future-Worm! Event morning  was getting my Time-travel Lunchbox Artistically Autographed!  You can see Ryan customizing my lunch box below.

Is there significance to the lunchbox?

“I had so many of those metal lunchboxes – the Star Wars ones, and the GI Joe, and you name it, I had every one.  That was so exciting.  So I thought that would be a fun vehicle for them to travel in.”

Will I be watching Future-Worm! – you bet I will!  My group of blogger friends will be watching as well!  Be sure to look for my review of the first episode next month! 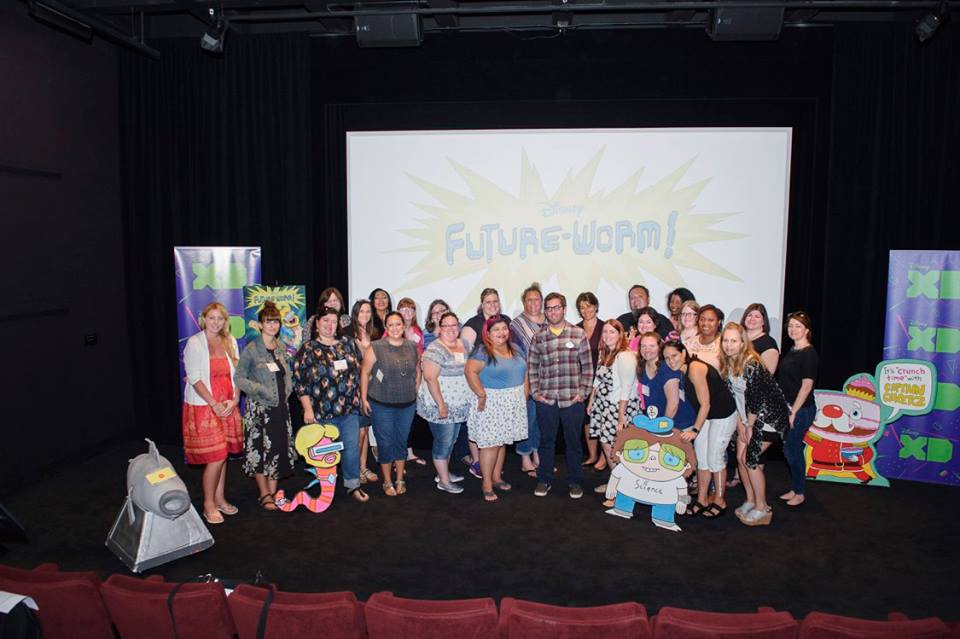 Don’t miss the premier on August 1st, 11am ET!
Check out the fun trailer!