What would a mammal metropolis look

~ director of Zootopia, Byron Howard
Happy Hump Day!  We’re almost ready for Friday to begin, but before Thursday sneaks in and Friday finally arrives, I wanted to help you plan your weekend!  This weekend you’re going to take your kids to see the next BIG movie from Disney Animation — Zootopia!

to the movies on Friday!

Zootopia is all about what a metropolis would be like if it were inhabited by animals instead of humans. How would these animals behave together?  What roles would each play in their community?  Would they talk?

In its 92-year history, Walt Disney Animation Studios has created a long and storied legacy of talking-animal films—from Mickey Mouse’s debut short “Steamboat Willie” to “Bambi,”“Dumbo,” “The Jungle Book,” “Robin Hood” and “The Lion King.” WDAS returns to the wild with the feature film “Zootopia.” “We all grew up watching the great Disney animal films—we were immersed in those worlds,” says director Byron Howard. “My favorite childhood film was ‘Robin Hood,’ and we wanted to honor that legacy, but in a new and different way that dives even deeper. We started by asking, ‘What would a mammal metropolis look like if it were designed by animals?’ The idea was incredibly exciting to us.”

How did Disney Animation do it?

What I love about Disney is that they take so much time to research their projects before they begin.  For Zootopia, Disney Animation spent eighteen months learning about animals and humans to make sure the animals were presented in their true likeness, not just the personality they are stereotyped to be. They Interviewed several experts, talked to anthropologists and sociologists.  They visited the best animal resources in the States: San Diego’s Wild Animal Park and Animal Kingdom in Florida, AND visited the Natural History Museum of Los Angeles County. They did all this before running off to Kenya, Africa for a life-changing adventure!

“I think all of us were profoundly changed by our trip to Africa,” adds Jared Bush, who is co-director and one of the screenwriters. “It’s such an amazing experience, being around hundreds, thousands of animals. In this movie, we want to feel that density, which is a lot of work. We came back after that trip with a sincere need to make it right.”

Of course, no movie is going to work, no matter how much research you put into it, without a great story!

that’s entertaining, has heart and says something meaningful.”

The modern mammal metropolis of Zootopia is a city like no other. Comprised of habitat neighborhoods like ritzy Sahara Square and frigid Tundratown, it’s a melting pot where animals from every environment live together—a place where no matter what you are, from the biggest elephant to the smallest shrew, you can be anything. But when rookie Officer Judy Hopps (voice of Ginnifer Goodwin) arrives, she discovers that being the first bunny on a police force of big, tough animals isn’t so easy. Determined to prove herself, she jumps at the opportunity to crack a case, even if it means partnering with a fast-talking, scam-artist fox, Nick Wilde (voice of Jason Bateman), to solve the mystery. Walt Disney Animation Studios’ “Zootopia,” a comedy-adventure directed by Byron Howard (“Tangled,”“Bolt”) and Rich Moore (“Wreck-It Ralph,” “The Simpsons”) and co-directed by Jared Bush (“Penn Zero: Part-Time Hero”)

What the above synopsis doesn’t tell you, is that Judy isn’t overly liked by her buffalo boss Chief Bogo,  and he wants her gone as fast as possible.  He immediately stuck her on parking duty to make her miserable, and the only reason he allows her a chance at a case at all is just to prove she doesn’t have what it takes to be a cop.  For added reassurance that she won’t succeed, he makes a deal with her that she has to crack a seemingly impossible case within 48 hours, or she quits!  Judy agrees to his terms, but is so determined to crack the case she does something she never thought she’d do.  She teams up with a scam-artist fox, Nick Wilde! 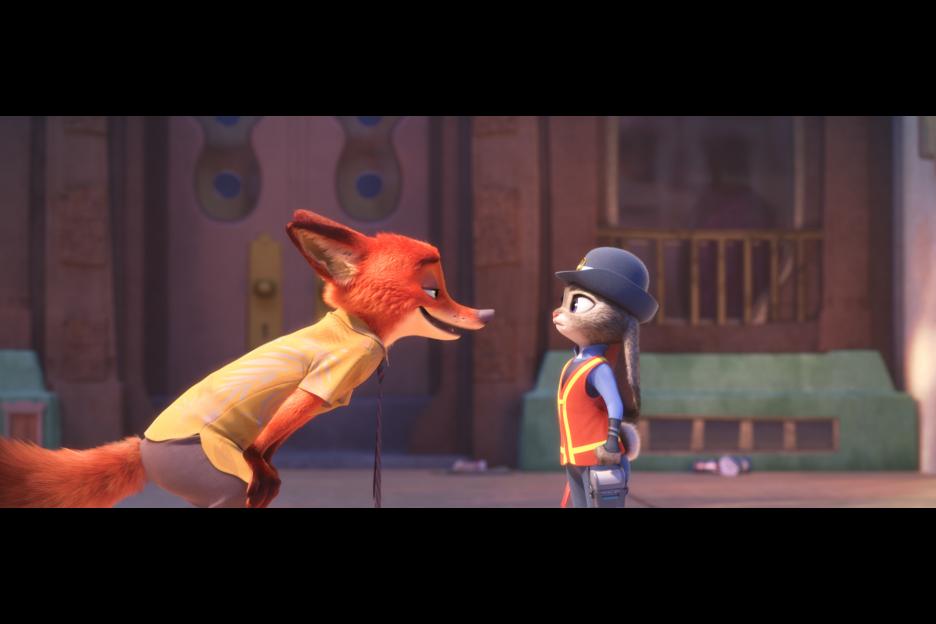 A sly fox and an innocent bunny… sounds like it could be a humorous tale of bizarre friendship.  Is it possible for the two of them to get along in order to crack the case in time?

“At its core, ‘Zootopia’ is a buddy movie,” says director Rich Moore. “Judy and Nick—a rabbit and a fox—are natural enemies by definition. So these characters don’t exactly get along at first. They come to the relationship with ideas about each other—beliefs that aren’t informed or accurate.”“In Zootopia, anyone can be anything.”
According to Byron Howard, the fact that the buddies don’t get along fuels the film’s comedy. “Judy is the eternal optimist who believes anyone can be anything—it’s the city’s motto, after all,” he says. “Nick is the complete opposite. He’s a cynic. He believes we are what we are. So we put this country bumpkin who’s full of vim and vigor in the middle of the big city alongside Nick—the realist—and he gets to have a lot of fun messing with her. But she has a few tricks up her sleeve.” 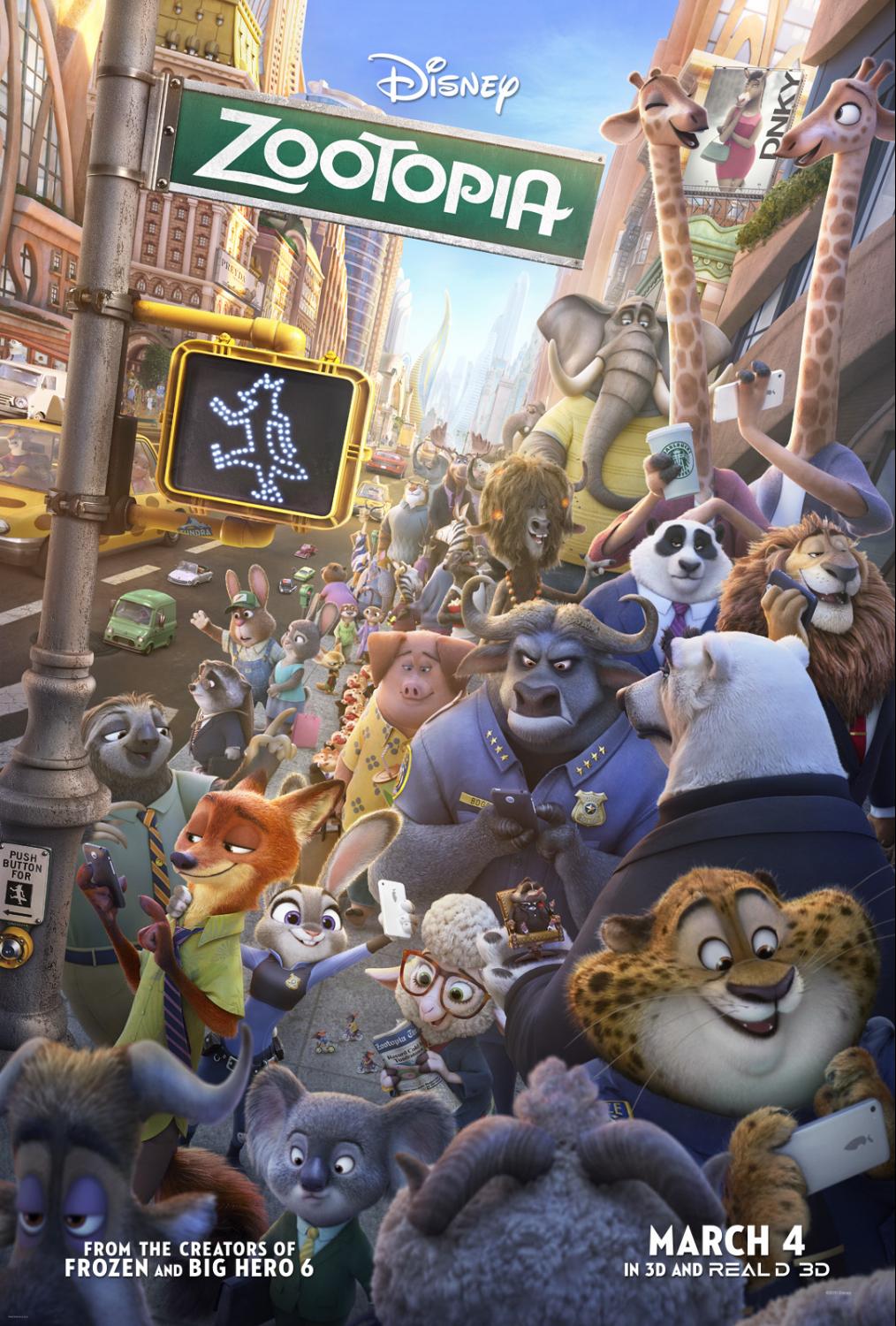