Something super cool is happening today on Facebook.  It is so awesome that my teen son has stolen my phone and is now using it on his homemade oculus rift to watch a 360 video from Star Wars: The Force Awakens where he can Speed across the Jakku desert!  Check it out for yourself HERE!

Starting today, 360-degree videos will begin rolling out on Facebook News Feeds.  There are a number of publishers sharing new 360 videos on Facebook today, including Star Wars, Discovery, GoPro, LeBron James & Uninterrupted, NBC’s Saturday Night Live, and VICE. These videos help show the range of possibilities with this new medium. For example, Disney and Lucasfilm are debuting an exclusive 360 experience from its upcoming movie Star Wars: The Force Awakens, bringing fans inside the beloved Star Wars universe. 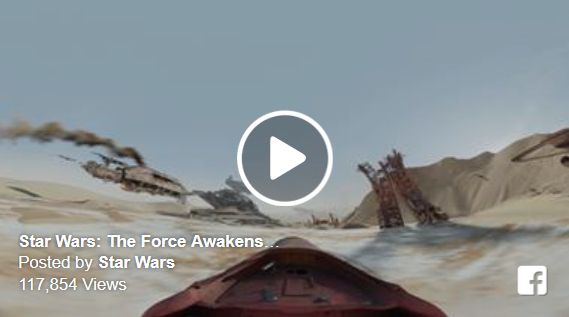