Pam surprised me this week with an amazing review for the Cuddlefish Towel Company.  What a surprise our three towels have been! Anyone who has been in my home for any length of time knows that my linen closet is something you don’t mess with.  I want perfectly neat, color coded, stacks of towels in there. I even have a special folding method that I have deemed the most “effective” for storage….

Why am I thrilled and going ga-ga for these towels?  Because they are lightweight, fold and store like a dream, and dry SO FAST you don’t even need to put them in the dryer!  Seriously – we don’t put ours in the dryer!  I hang them up and within minutes they are dry! This is almost unheard of for me because I hate line drying towels (crunchy towels are not my thing) but the Cuddlefish dry like nothing I have ever seen. Can you think of how many loads of laundry you wouldn’t need to dry in your dryer each week if you switched all of your towels to Cuddlefish?  That’s more than 100 loads each year that wouldn’t need the dryer turned on!  (Saving energy is a big WIN WIN) 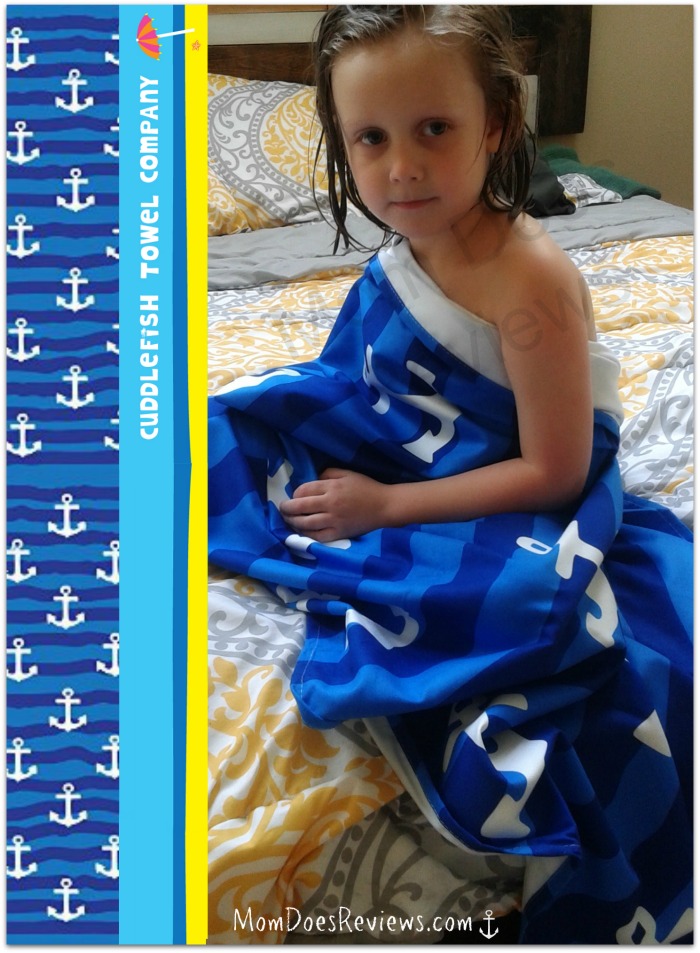 [Their] beach-sized towel weighs a mere 11 ounces and folds to the size of an iPad. You can easily slip several into a beach bag, backpack or carry on and still have lots of room for all your other essentials.

What’s more, [their] soft, smooth towels are made with the absorbing power of microfiber. In fact, one slim Cuddlefish towel holds three times its own weight in water.   Yet these towels won’t stay wet for long. Cuddlefish towels dry fast in the sun, on the hook or in the dryer.

What the Kids Say:

My little guy loves his so much that he slept with it the first night like it was a blanket.  He refused to let me have it after his bath. As fast as he was dressed for bed, his towel was already dry! (Yes, I was floored)

My oldest daughter likes that there is a convenient hook to hang the towel from.  She is always afraid she will tear towels when they are placed on hooks and this takes that worry away. 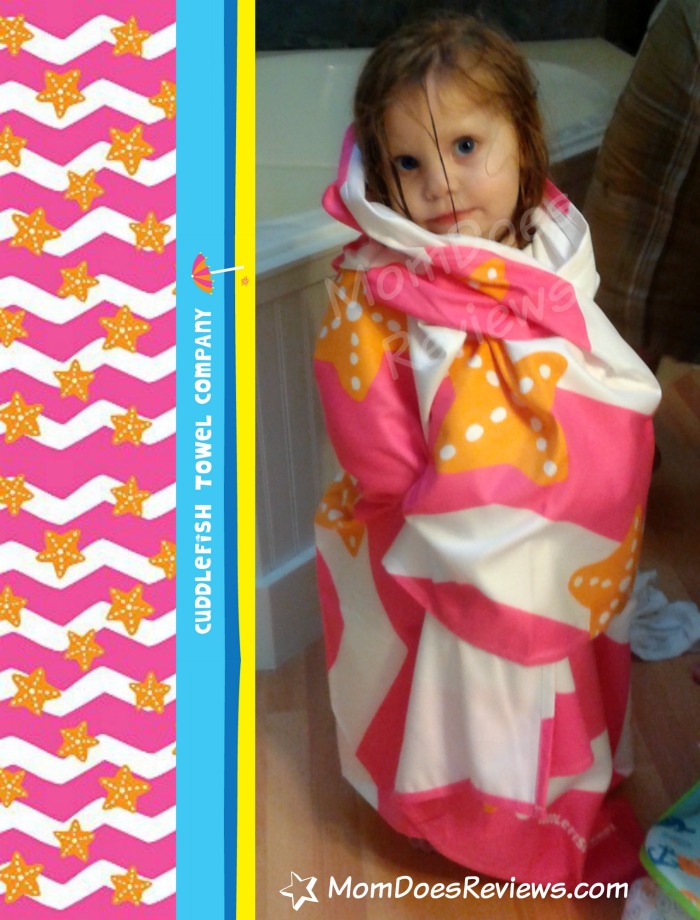 Baby Girl likes how soft it is.  She agreed that it was like a blanket but didn’t demand to keep it like her big brother did.  She also loves the sea stars as they are her favorite.

I thought the towels were going to be like a fabric shower curtain, and I was really skeptical about their absorbancy; especially after seeing how fast it dried after my kids’ bath. I assumed it had a repelling feature instead since it dried so fast.  I was wrong.  Very wrong. I am baffled by how absorbent the towels are since they are so thin.  I would go on to say that they are more absorbent than any of our traditional beach towels.

The lightweight makes them easy to take with you anywhere. Take them to the gym, sporting events, beach, or wherever you want this summer! They are so light they won’t be weighing you down! 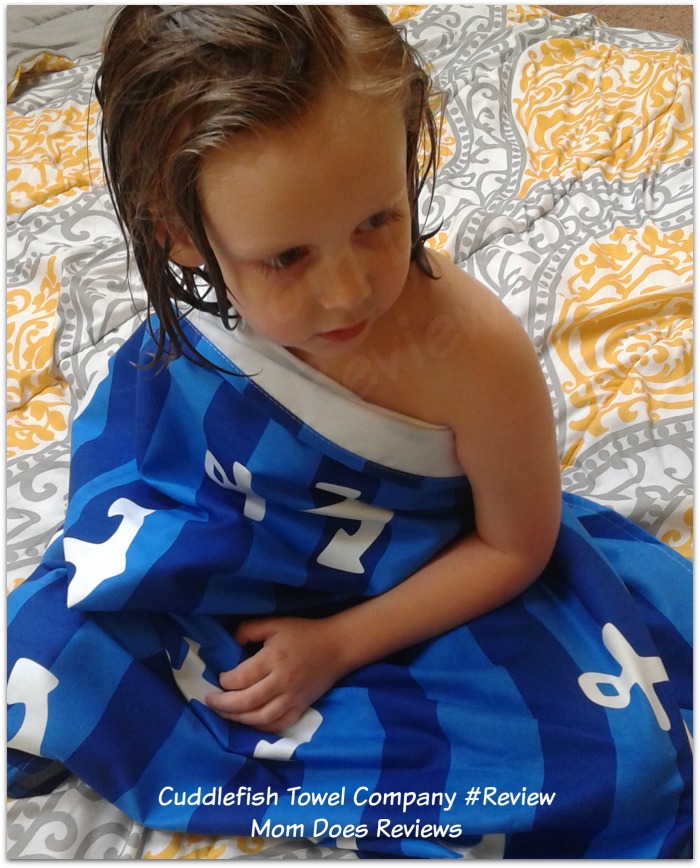 The Cuddlefish Towel Company’s towels have been my greatest surprise all week.  I don’t think it matters if you are beachy or not, they are too amazing not to try!

Cuddlefish Towels are currently available in four patterns!  Check them out HERE. 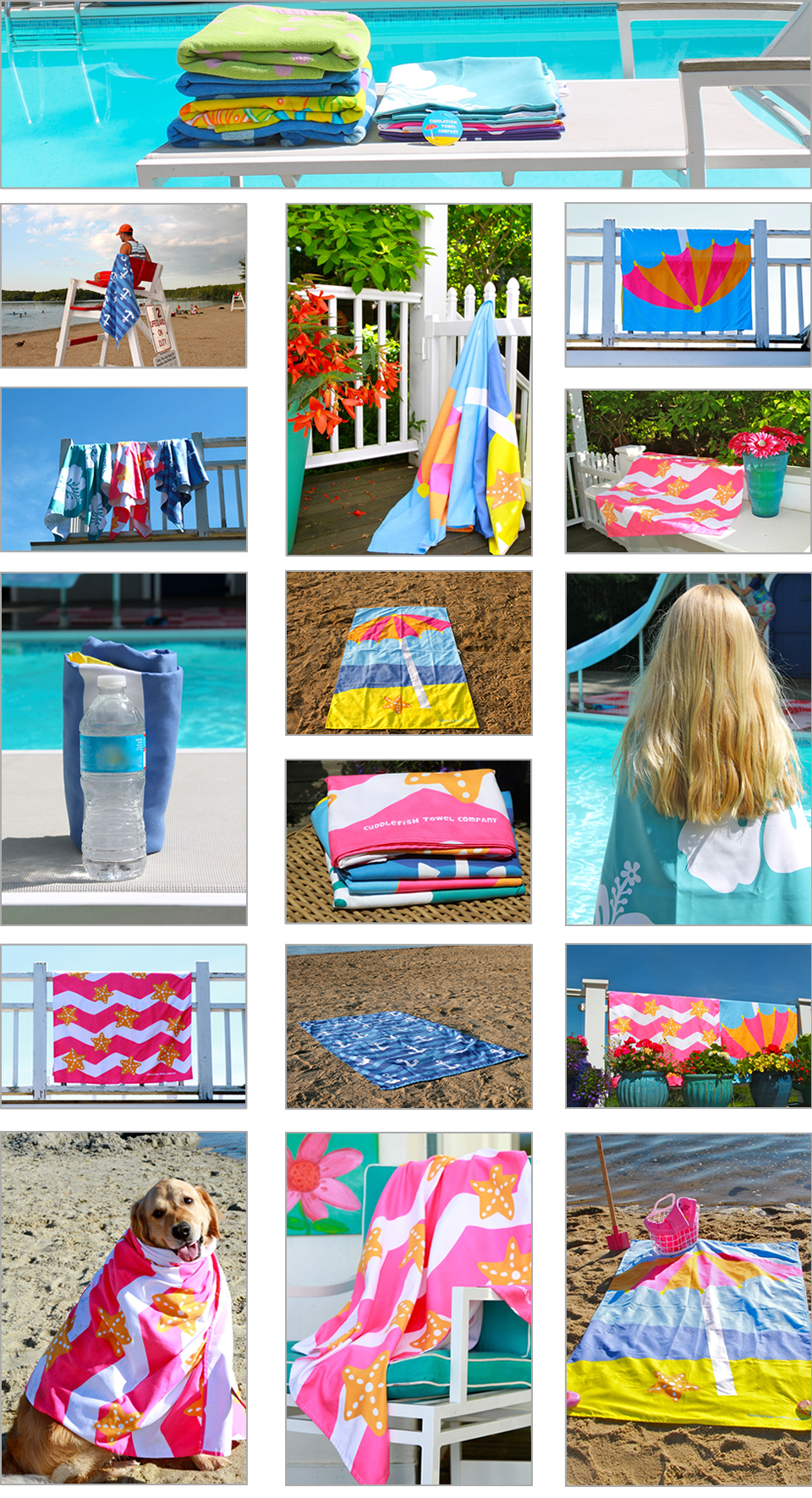 Mom Does Reviews, Southern Krazed, Powered by Mom and Top Notch Material  have joined together to bring you the BIGGEST and BEST event of the Season!  The Spring into a Sizzling Summer Event has  the hottest products you’ll want to grab for summer! Click on the image below to check out the other HOT reviews! 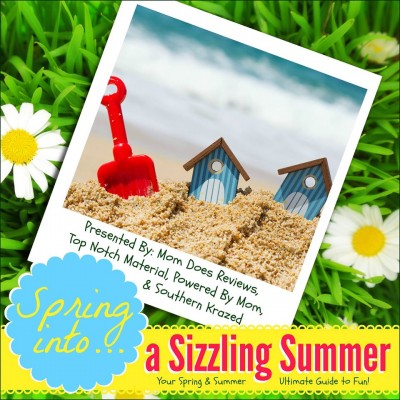