The history of cinema is dotted with examples of critters who have made us experience warmth, love, affection and joy. Some animals have become so iconic that every time we see that specific creature we are reminded of them. The animals which have left their mark in Hollywood movies were well-known for the stunts which they performed. They had the right temperament and willingness to fit the roles. Behind the scenes, the movie animal trainers played a very important role. Movies based on animals can create an entire gamut of emotions in the viewers. 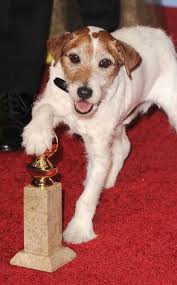 The Artist is a popular film which released in 2011. Uggie a Jack Russell Terrier plays an important role in the film. Uggie’s owners disowned him as they found him too wild. The dog trainer Omar Von Muller found him and tapped his energy. Uggie can play the role of comedic companion very role. After his performance in “The Artist” it has been felt that he should be nominated for awards. He is one of those living Hollywood movie dog who has an own Twitter account. His brilliant performance in the movie caught attention of the international audience.

Toto is a Terrier who was trained by Carl Spitz. Within a short period of training Toto began to attach herself to the starlets of Hollywood. She made her debut with Shirley Temple in the year 1934. She was perfectly trained for the movie Bright Eyes where she performed numerous stunts. Toto used to earn $125 dollars in a week. Toto is a reel dog which attained large fame and popularity. Morris the feline was in a shelter when trainer Bob Martwick spotted him. Morris appeared in the movie The Long Goodbye in 1973. He became a flag bearer for best cat food in the market.

Lassie is one canine which is the most famous in the world. Pal was a popular Hollywood dog which was born in Cherry Osborne’s kennel. He was trained by the famous Hollywood trainer Rudd Weatherwax. Pal was in the habit of consistent barking and chasing motorcycle. Pal was used for important stunts in Hollywood movies. Rin Tin Tin is a popular canine superstar who rose to great fame. He received many votes for Academy Awards in 1929. He was affectionately called Rinty and he starred in 27 movies. Rinty’s popularity made German Shepherds a sought after breed among dog-lovers.

Marley and Me is based on an autobiography where tale of a yellow Labrador retriever is narrated. The dog was adopted by the author. Initially, the dog creates a nuisance but matures with time. 22 Labradors were used to play the role of Marley. Today while training dogs for movies trainers opt for high quality dog food. Without hunting stores, you can find pet products easily at PetFlow. You can order the products online and the pet product will arrive at your doorstep within 2 days.

Benji is a classic family film which came up with 5 sequels. The role of Benji was played by a pooch named Higgins. People found Higgins adorable and loved him for the role he played in the movie. The original movie is based on the story of a stray dog which helps two kidnapped children to escape. In the last sequel of the movie Benji with two pet savers tries to save his mother from cruel owners. The dog based movie and its sequels are heart-rending tales. These touching sequels have gained popularity among viewers across the globe.

Author Bio: Roger Lawson orders pet products from Petflow. He finds the service useful and convenient as the products are delivered to his doorstep within two days or placing an order. He loves to pamper his pooch and enjoys the games which keep his pet active.