I received this phone and 3 months of Sprint Service, free of charge, for purposes of this review.  All opinions are 100% my own.

About the Waterproof Kyocera Hydro Edge:

Want to know how you can have a speaker phone function with a waterproof phone?

Hydro Edge features Kyocera’s proprietary, award-winning Smart Sonic Receiver technology, which eliminates the need for a traditional speaker in a handset by using vibrations to transmit sounds directly to the eardrum. Placing the phone in contact with the general area of the ear creates clear sound even in very noisy environments, such as construction sites, sporting events, concerts and playgrounds. Removing the traditional speaker eliminates the need for a speaker cavity in the phone’s housing, enabling cleaner aesthetics and enhanced waterproofing.

I can’t lie.  My husband has washed his phone 3 times.  Of course, none of them survived.  We kid around that he only gets a “dumb phone” because a smart phone  might not be smart enough to stay alive!

Now, I have to take all that back! Kyocera makes the Hydro Edge just for people like my hubby!  It’s made to withstand splashed or sprayed water or 30 minutes in submersed water.  I am really tempted to put it through the washing machine, but I may just see if he does it accidentally.  Since he only has a “dumb phone,” we all voted that Daddy gets to try this new smart, waterproof phone.  It runs with Droid, which he uses on his tablet already, so it just made sense that dad gets the new phone.

The only problem is, he needs a tutorial from my son or me before he will use it.  Tonight we are taking the plunge and doing a 30 minute training session. 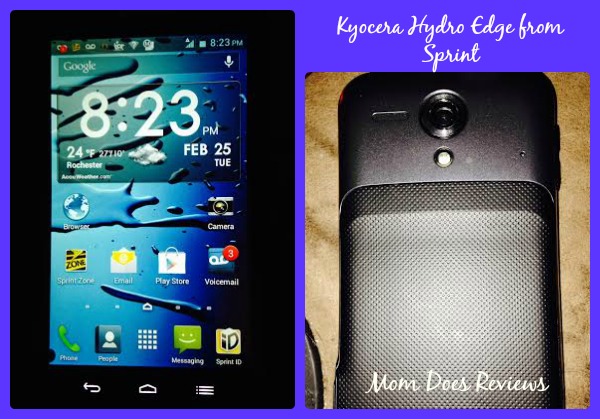 I love the “Framily” shared plan!  You can name anyone to be in your Framily, they don’t have to be related at all!  After all, we really probably do call our Framily more than our family.  I would have to include my son’s friends’ parents, my buddies from the blogging world- a few I have never even met in person and maybe our neighbors.  I would add my sister and parents as well talk a lot on the phone or by text or message.

I will keep you updated on the training session with hubby.  There is hope for him yet!  His smart phone, the Kyocera Hydro Edge, is smart enough to withstand water!!

I love the JellyBean Platform and easy to use interface. I was a Droid lover for the longest time.  Now I’m iPhone all the way!  Time will tell how hubby likes it!

Sprint is redefining the wireless family with the new Sprint Framily Plan – a revolutionary pricing program that lets consumers decide who they consider family. For one line of service, new Sprint customers pay $55 per month per line for unlimited talk, text and 1GB of data. Build a group of at least seven people and everyone gets unlimited talk, text and 1GB of data for $25 per month per line.

Now your yoga teacher, favorite barista, fantasy football team, parents on your son’s soccer team, cube mate, parents and anyone else in your extended community can all be a part of your “framily.” With Sprint Framily, the more individuals in a group, the greater the savings for each member.

The Sprint Framily Plan is available to new and existing customers. Build a group of at least 7 people and everyone gets unlimited talk, text and 1GB of data for as low as  $25 per month per line while on the Sprint network. Plus, for only $20 per month per line, group members can buy up to unlimited data and get a new phone every year. Each member of the group can customize their plan to meet their unique needs and each account is billed separately. For one line of service, customers pay $55 per month per line for unlimited talk, text and 1GB of data. For each new Sprint customer that joins the Framily group, the cost per person goes down $5 a month up to a maximum monthly discount of $30 per line.

According to the 2010 U.S. Census, 60 percent of total U.S. households are made up of fewer than three people and are growing more quickly than larger households.

Married couples without children have grown 11 percent since 2000, and make up more than 40 percent of family households. (2010 U.S. Census) Sprint recognizes that family can mean something broader – including both traditional families but also extending into a group a friends or community – and now is offering a solution that provides value to any group who wants to come together to purchase wireless service.