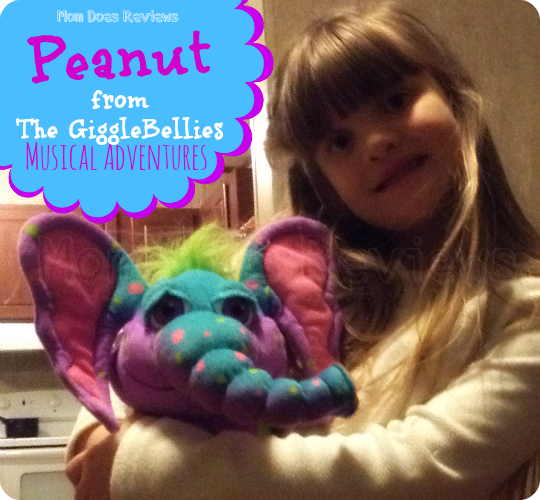 I was given this product, free of charge, for purposes of this review.  All opinions are 100% my own and are not influenced by the developing company, and/or it’s affiliates, in anyway.

My eight year-old has a new plush lovee, his name is Peanut, and he is featured in several music videos on the GiggleBellies DVDs. Peanut is hand made with soft velboa and polyester fiber stuffing. She loves the bright shades of purple, pink, and aqua, and says she couldn’t make a more colorful elephant!  Our sweet girl has affectionately nicknamed him “Rainbow” and gets rather upset if anyone refers to him in any other way.

“Peanut” is rather adorable.  So much so, that he has received a wound from a sibling tug-a-war on his leg.  I was surprised at how easily he tore but was able to repair it easily with needle and thread.  The tear occurred at the seam. I think a less firm stuffing would be a great solution to avoiding tears at the seams. 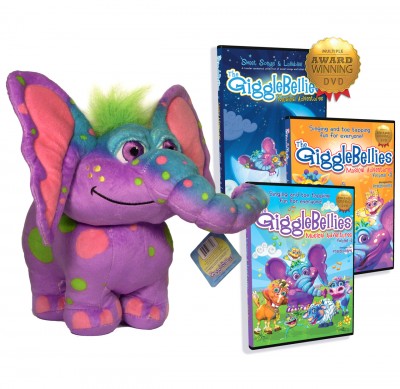 My youngest bunch enjoy the DVDs.  They are a wonderful distraction to cranky, irritable, or sleepy little ones (ages one and three).  The duration of each seems much longer than what they are.  They average thirty minutes, but I must say, they feel longer to me.

I prefer to keep the DVDs set aside for special times of the day… instead of unlimited access.   Right now with the winter weather the little ones aren’t getting as much outside time as they would during milder season.  Thus, there comes a point in the day when they want to run, play, jump around, and act a little silly.  If they don’t have that time when they desire it… they get into mischief.  This is where these DVDs get utilized best!  I put one of the two daytime volumes on, they dance and sing along with the colorful characters, and I encourage them to move around as much as their tiny hearts desire!

The majority of the songs are familiar children’s songs but the melody of each is updated, or modernized, to appeal to children in a fun way.

SING. DANCE. LEARN!™ We strive to initiate the words “Play it again” and bring forth valuable and fun entertainment to your little ones. Our goal is to inspire toddlers and preschoolers to sing, dance and learn, which we believe is a balanced approach.“The GiggleBellies™ Musical Adventures” has captivated kids around the world since 2009. Simply put, we create unique music and creative worlds that kids enjoy and understand. AHOOGA!™

The GiggleBellies has almost sixty colorful animal characters.  If you have a little one who is fascinated by animals, they will love GiggleBellies!  I can’t wait to see what they come up with next because I think a plush line with all of their adorable characters would be amazing!  Can you imagine collecting them all?  Gasp… my daughter would go bananas!

The Lullaby DVD is great for settling my bunch down after a long day.  I can put the DVD on while I am putting my oldest kiddos to bed. It allows for me to have alone time with the bigger bunch while the wee ones quietly enjoy the DVD.  By the time I am finished with the oldest group’s goodnight hugs and kiss, I return to two wee ones who are ready for bed.  They are often asleep within two minutes after I return!

I most certainly recommend the GiggleBellies DVDs for anyone who has young children.  They are great for helping them burn through some energy or settling down at bedtime.

We can’t wait to see the next plush they release!  We have our hopes set on Wally Walla but we think any of the monkeys would be cute too.

Use coupon code mom2014 for 10% off your purchases with no minimum purchase amount!  Coupon code expires on March 31st, 2014 so hurry before it is too late!

Stop by and visit the GiggleBellies for product information, video clips, OR to join their FanClub for free printables!