Super Easy Dessert to Make with Your Kids!

I spend most of my day in the kitchen—baking, cooking, and creating foods for which I hope to be rewarded by the enthusiastic “ooohs” and “yummms” of appreciative friends and family. I like to think of myself as a passionate food artist; the Botticelli of bread, the Cassatt of cupcakes, the Michelangelo of meatloaf.

So I was delighted recently when my teenaged daughter expressed in interest in preparing a dessert for a get-together with friends. Normally, her interest in all things culinary doesn’t extend much beyond 2 slices of bread and lunch meat. Well, that’s not completely true. She enjoys a small bit of fame around our house for her lemon bars. She made them for the first time several years ago and that has been her go-to recipe ever since.

Apparently, however, she was feeling the need to expand her culinary horizons and I was eager to help her find a recipe. Keeping the food artist analogy in mind, I reminded myself that my daughter is still in the paint-by-numbers stage of her baking career. Wanting her to be successful, I suggested she peruse a family cookbook that an aunt of mine had compiled years ago.

She did just that and found herself attracted to a wonderfully kid-friendly recipe for ‘Chocolaty Fluff Dessert’.  It’s not difficult to see why she thought it sounded delicious. What’s not to love about a sweet treat made with cream cheese, pudding and a ridiculous amount of Cool Whip? As kids, my sister and I lovingly referred to it as “That Chocolate Glop” which I think is probably a more apt recipe title. 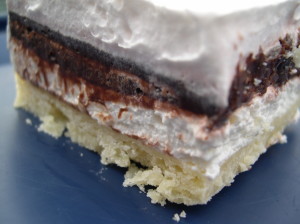 I admit to being a bit of a food snob, especially when it comes to chocolate, so this type of recipe doesn’t usually appeal to me. But only the most intolerable snob would turn up her nose at this treat-it’s impossible not to love.

I’m sure you’ve already figured out that this little cooking story had a happy ending – my daughter had no trouble preparing the dessert and her friends happily devoured the entire 9×13 pan full of chocolate glop. Except for the rather sizable piece that I saved for myself.

To make crust; mix flour, butter and powdered sugar. Press into a greased 9×13 pan. Bake at 350 degrees for 10 minutes, until very lightly browned. Set aside to cool.

To make filling; whisk together half of the Cool Whip, softened cream cheese and powdered sugar; spread on top of crust. Mix pudding with mild until soft set; spread over the cream cheese layer. Top with remaining Cool Whip. Refrigerate for an hour before serving.

About the author: When Jacqueline Cole isn’t cooking, baking or eating, she enjoys posting her favorite bread recipes at her blog, The Bread Babe.