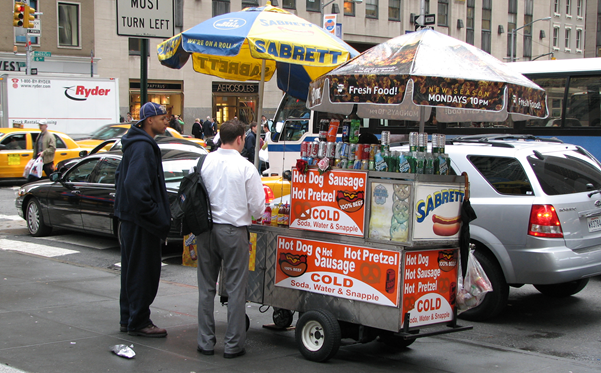 New York’s cultural diversity has been the pushing reason behind it’s lifestyle advancements—some say that it’s years ahead of others states in the US. New York City is where it all happens; with significant impacts on finance, commerce, art, media, research, fashion, education, technology, entertainment and more. The list is endless, really. The great thing about New York is its ability to stick to its roots. What would New York be without some classic, unhealthy, street food? Nowhere. This is why I have written this post to outline some of the best street food in the state—no matter what type of cuisine you prefer, there will always be a meal for you. By Sohaib S.

The culture diversity has resulted in an influx of residents who prefer Halal food over the rest. Despite that label, the guys on 53rd and 6th have become popular amongst anyone from any background. For $6, you can get a (rather huge) portion of lamb, chicken, or both with some rice. You can choose hot sauce mixed with white sauce and have a truly delightful dining experience.

Uncle Gussy on 345 Park Avenue offers authentic traditional Greek cuisine made from scratch by a legit Greek mama: Katerina. Have a taste of the Mediterranean with food imported from Greece and season with lovely flavours such as oregano. A personal favourite is their Tzatziki sauce; they make a fresh batch daily, and that alone is certainly worth the visit.

Brooklyn’s Red Hook Ballpark is popular for its exceptional South American street food stands. The choices are overwhelming; there’s just too much to eat as soon as you enter the Mexican heaven. My recommendation here, though, would be Piaztlan Authentic Mexican—winners of the Vendy award last year. There are no surprises here, just go for the usual babacoa tacos and you won’t be disappointed.

KFC isn’t everyone’s first choice. Of course, you can always try some TFC – Taiwanese Fried Chicken. Located in Bian Dang, the Asian marvel is to die for. Their peanuts and anchovies appetizers make a quirky but tasty snack. Their menu is specialized; short, simple, and sweet.

Street meat can leave the biggest carnivores feeling queasy. Whether you’re vegitarean or you just want a change, The Cinnamon Snail will have your taste buds flaring in all kinds of excitement. Their food is the highest quality you’ll find on the streets of New York, both organic and vegetarian. I’m sure that one bite of The Cinnamon Snail’s Provençal white wine tofu baguette and olive tapenade will leave your jaw dropped. Of course, the best is yet to come. My personal favourite is the jalapeno chocolate brownie—odd but delightful!

We all need it…we all love it…dessert! Finish up with some sweet and savoury waffles with endless toppings at the Wafels and Dinges. It’s a moving cart that you can usually spot around Central Park. If you manage to catch it, then be sure to try the spekuloos ice cream. According to their official website, it is made with some spiced cookes and “children’s laughter”. That can’t be bad, can it?

If you plan on trying out some of New York’s best street food and need a place to spend the night, HotelClub have great deals on New York hotels going on at the moment.