A recent survey found that – rather worryingly – somewhere between one quarter and a half of all British children believe the following “facts” to be true: that cows go into hibernation in winter, that oak trees give rise to the beloved conker, and that there is no such thing as a dock leaf – the leaf which can soothe the painful sting of a nettle.

And to be honest, you couldn’t really blame them – the same study revealed that almost two-thirds of the 2,000 children polled played outside less than once a week! And more than a quarter of the kids hadn’t been for a walk in the countryside in the last twelve months, and that one-in-five had never climbed a tree… not even once. 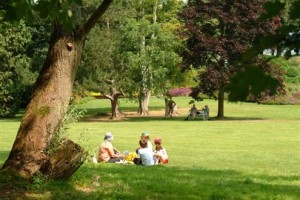 More Indoors Than Out

The study was conducted for the nature TV channel Eden, who have sponsored a number of similar ones in recent months. Apparently, Daleks are more recognisable to children than owls are, and most children tend to play indoors; a stark contrast to just a few years ago when it would have been almost unheard of for a child not to play outside, whether climbing trees, riding bikes or kicking footballs.

Why is this important? Well, there is clearly a lack of exercise among the youth of today. The most important contributing factor to child obesity is a lack of exercise, and would you look at that – child obesity is more common than ever before! Children need about an hour of heartbeat raising exercise every day to keep fit, as well as cutting out some of that unnecessary junk food, as that doesn’t exactly help matters.

Is Experiencing Nature So Important?

In a word, yes. Scientists are beginning to believe that the time spent in nature affects a child’s development as an individual, as well as society as a whole. They have found that many more children spend their time with electronics rather than Mother Nature, and that this has led to a culture of molly-coddled kids.

Apparently, just five minutes of exercise in the outdoor world (dubbed “green exercise”) can positively affect the self-esteem and overall mood of a child in a big way, and will even lead to benefits in areas such as problem solving, co-operation and self-discipline.

What You Can Do

Well first of all, encourage your kids to go outside once in a while! Sure, they can go on the Wii now and then, but not all the time. As long as they stay away from main roads, they’ll be fine.

Take them for an alternative family day out at Ness Gardens – or one of the many other botanical gardens available to us lucky Brits – and simply let them run about for a while.

If that’s not your thing, just take them down the park! Climbing trees is fine – remember, you did it as a child and it didn’t do you any harm, so why shouldn’t your young ones give it a shot?

Keep encouraging them to go outside – it’ll be worth it in the long run, and they’ll grow up to be better, more stable adults. Go and have fun!

This post has been written by Zoe Wilkins who mainly writes about children’s education and the different approaches you can take to help children with their learning.