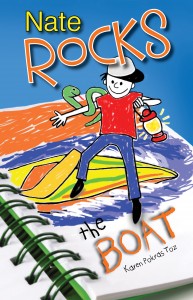 About Nate Rocks the Boat:

With fourth grade finally winding down, 10-year-old Nathan Rockledge is looking forward to a fun and relaxing summer at home with his friends. That is, until his mom decides he has to go to overnight camp with his annoying older sister.  When his best friend Tommy decides to tag along, Nathan thinks maybe his summer won’t actually be so bad. After all, he does get to be away from his mom’s awful cooking for an entire six weeks.

Amongst Color War competitions, a flaky counselor, and a bully named “No-Neck,” Nathan turns to his trusty sketchpad, transforming himself into Nate Rocks: 10-year-old extraordinaire. His speedboat ready for action, Nate saves the day time and again from the perils of floods, snakes, ghosts, and even the most wanted criminals.

Join Nathan, Tommy, Abby, and a whole new cast of characters as Nate Rocks once again proves nothing can hold him back in this second book of the Nate Rocks series.

Nate is back again!  If you loved Nate Rocks the World, you will love Nate Rocks the Boat.  Not much has changed in Nate’s life.  His sister is still evil, his mom can’t cook, his dad still tells dad stories.  This time, Nate takes his heroic skills to camp.  At first he doesn’t want to go to summer camp, but when he finds out his best friend is going too, he gets excited.  Then he learns his sister is going to the same camp.  Will Nate survive?

Nate helps save a TV show while doodling on his math paper.  He’s Nate Rocks after all, he is the only actor they need to save the day. The scene is funny because it is set in a boys cabin at camp and Nate Rocks has to dump a bucket of water on the boys to wake them up.  That helps set the scene for the rest of the book.  I know we are in for some fun!

My favorite part of the book happens next.  Nate is playing horseshoes and gets a black eye by Lisa, the annoying classmate that never shuts up.  Of course, it’s Nate’s fault because he didn’t back up when Lisa told him to.  The only good part of the black eye incident is that Nate was able to take off his gaudy Hawaiian shirt his mom made him wear.

Nate makes it to Camp where the real fun begins.  In the first 10 minutes, Nate Rocks saves Camp Spring Ridge from a muddy flood with duct tape and rain gear.  Nate  manages to avoid his sister, put up with his camp counselor with the mysterious clipboard and one of his bunk mates- No Neck.

The camp has a tradition, Color Wars, that last the whole summer.  Nate is on the opposite team from his sister, of course.  He actually enjoys himself on the scavenger hunt.  He saves a boy from a deadly snake, he saves a young girl from a shark with his speed boat, and saves the whole camp from a bomb.  This book has more action and adventure that any 10 year-old could fit into a summer.

I love all the fun details that Karen weaves into the book.  We are not able to forget mom’s horrible cooking.  In fact, her cookies and brownies help keep the dinosaurs from invading the camp. The Ghost book his dad gives him comes in handy throughout camp.  The descriptions and details are so vivid, I feel like I am back at summer camp. 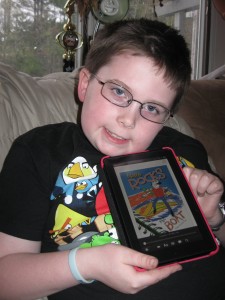 I highly recommend Nate Rocks the Boat for children ages 7 to 11.  I think boys will like it a little better than girls, since is does have exciting, sometimes gross stuff that boys love.  I know my son loves it.  Don’t tell him how it ends, he’s not done reading it yet.   By the way, I love the ending.  I wonder if the new furry member of the family will have a main roll in the next Nate Rocks book?  Will he be his trusty companion with some type of super powers?  What do you think?

Karen Pokras Toz is a writer, wife, and mom. Karen grew up in Orange, Connecticut and currently lives outside of Philadelphia with her husband and three children. In June 2011, Karen published her first middle grade children’s novel for 7-12 year olds called Nate Rocks the World, followed in 2012 by the second book in the Nate Rocks series, Nate Rocks the Boat. Karen is a member of the Society of Children’s Book Writers & Illustrators (SCBWI).  Be sure to visit Karen, follow her and  get your own copy of Nate Rocks books at Amazon or B & N.

Thanks to Karen for donating a copy of Nate Rocks the Boat for One LUCKY winner.  The winner can choose a paperback book or ebook.

Open to US only.

Enter on the Easy Rafflecopter below.  Only 3 mandatory entries.