American Heroes in Song: Ellis Paul’s ‘The Hero in You’ CD review and giveaway

Find the Hero in YOU! 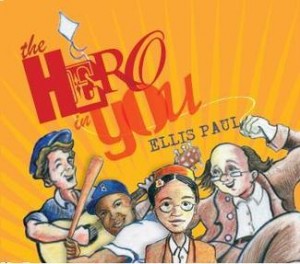 At a time when our national self-image is at an all-time low, Ellis Paul presents host of new and original songs pointing to the bright spots of America’s great heritage. His second family music album, The Hero in You, debuts this month on Black Wolf Records (http://www.ellispaul.com). The new CD is the first in a planned series focusing on heroes of all kinds.

Ellis Paul, who has been called “one of contemporary folk music’s most influential voices,” includes 14 songs, plus a colorful keepsake booklet featuring Paul’s illustrations. The Hero in You follows Dragonfly Races, Paul’s best-selling and award-winning 2007 family music album.

Known for his deeply felt and socially conscious songwriting, often about heroes, Ellis Paul was inspired by his own two growing daughters and four years of performing for families to write about people who contributed something to the world through their work and art.

“I spent the last year writing about people who made significant contributions to our culture and in doing so, helped to change the course of our country’s future, “says Paul. “Strangely, I started regaining some pride in the process. These people reminded me of how lucky we are to be living here, and that the opportunities here demand that we live boldly.”

The featured heroes include well-known personages like Benjamin Franklin, Thomas Edison, Jackie Robinson, Woody Guthrie (whose centenary year is 2012) and Rosa Parks, and some are not as familiar, but just as noteworthy for their accomplishments.

Ellis Paul has been a favorite singer/songwriter of our whole family since we heard him in concert a few years ago.  His easy, inspiring lyrics along with his fun, folky music makes you want to listen to him for hours.  “The Hero in You” is by far my son’s favorite Paul CD since it encourages children just like him to find the Hero in themselves.  Even if they don’t think feel like a hero, they just might be a hero in someone else’s eyes.  Children  are full of potential inventions, accomplishments and greatness.  It’s important that we encourage our children to be the best they can.  Especially in this age when their self-esteem seems to be at an all time low.

The title song, The Hero in You is one of my favorites.  It doesn’t matter what you do or who you are, we all have a hero inside of us.  Just trying to be a hero, especially when you are someone else’s hero, can make you feel like you’re flying above the world.

My favorite song is Ben Franklin.  I agree with Paul, we do need to thank him!  I still have the catchy tune in  my head.  I had to listen to the song in my car a few times so I could get the words right and be able to sing it in my head:0)  He did so many things that I had forgotten about over the years.  The quotes were so fun in the song.  My mother-in-law loves his quote “Fish and guests go bad after 3 days.”  That may be why I like the song so much because it reminds me of her.

One of my son’s favorite songs is Einstein.  The song is so fun but so true.  Some people never take the time to see the world as beautiful.  Einstein may not have combed his hair, but the opened the door to a whole new beautiful world.

His other favorite song is the Thomas Edison song.  I have to admit, that one is is great.  Love the last line: “when you get an idea, let’s make a deal: to be like Edison and make it real.”

Not only is the CD fun and entertaining, it is also educational.  We learn or refresh our history facts without even knowing it.  History was always my least favorite subject.  But, I bet it Ellis Paul taught history with his songwriting, I would never forget any of it and I might even enjoy it.

The whole CD makes children and their parents feel good about being themselves.  It encourages children to take chances and become a hero and do the best they can in all they do.  Take your ideas and make them reality.  There is no limit to what you can do if you believe in yourself.

Mom Does Reviews gives “The Hero in You” CD 5 out of 5 stars.

I received one or more of the products mentioned above for free using Mom Blog Society. Regardless, I only recommend products or services I use personally and believe will be good for my readers.(http://momblogsociety.com)

Enter on the Rafflecopter below.