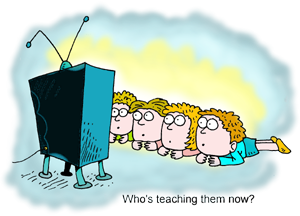 Television sucks kids into a zombi-like vortex.  Kids stare for hours at the screen as characters, commercials and dramatic scenes flash by.

Nintendo Ds, and other handheld gaming systems, suck kids into a addicting whirlwind of play.  They can’t stop mashing buttons and clicking with the stylus because there are always new levels to unlock, monsters to defeat or just endless fun.

The computer used to be avoided by many at all costs.  Now kids can’t live without one.  They have their own email accounts, Skype accounts, game logins, and even Social Media accounts.  Computers encourage communication without Face to Face contact.

Is all this technology making our kids brain dead?  Or, do kids actually learn things while watching TV or playing games?  Of course, if kids were only allowed to watch the discovery channel, they would learn many things.  But, can Cartoon Network be educational?

What do you think?  How much screen time do your children get?

Many people tell parents that their kids watch too much TV.  How much screen time is too much?  Where is the “too much” limit for your children?