NEVER UNDERESTIMATE THE POWER OF MUSIC

Follow along on a magical journey of powered by the love of family.  Our family loved Miguel’s journey, yours will too!  Disney Pixar’s Coco needs to the next movie on your Family Movie Night list! 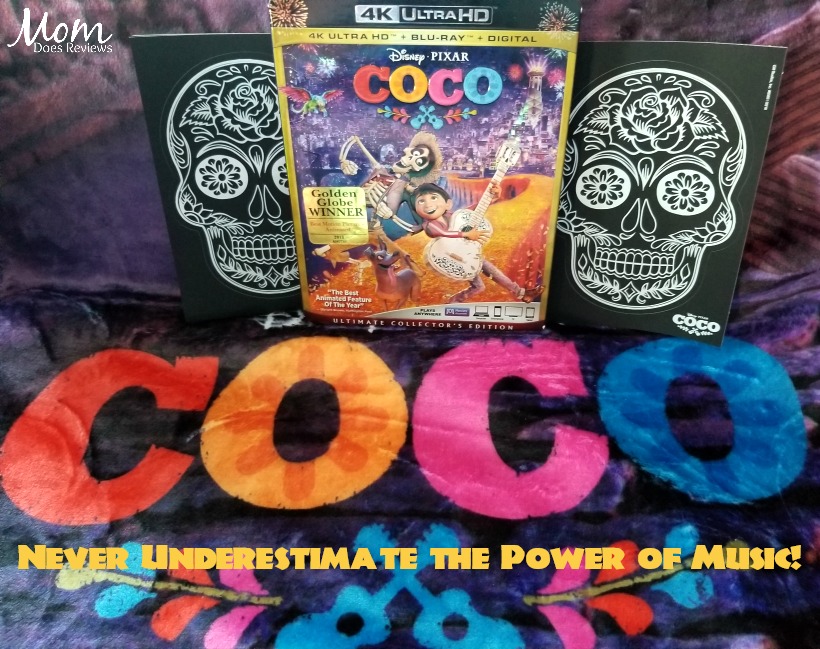 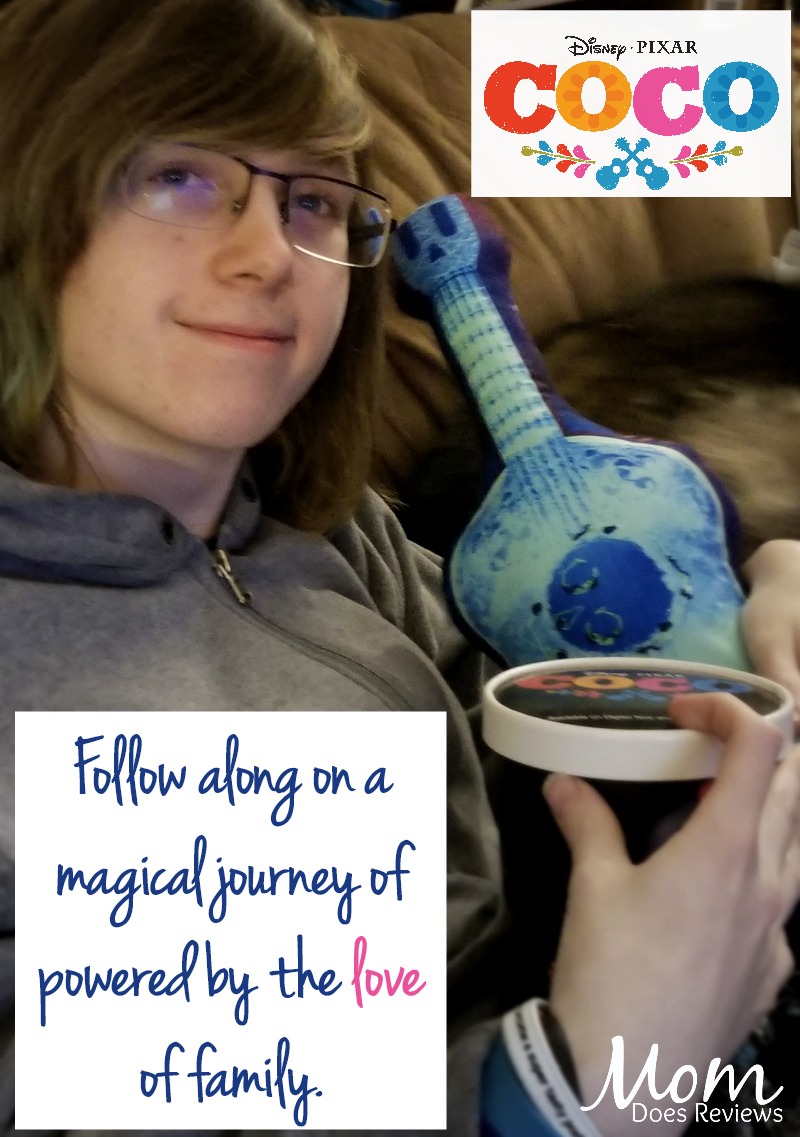 Through fresh and fascinating bonus material, adventurers of all ages will tag along with filmmakers as they soak in Día de los Muertos in Mexico; explore the essential role of music in “Coco;” and learn how the cast and crew personally connect with the film’s message. They’ll step behind the scenes to discover the inspiration behind the film’s creative costuming; Miguel’s beautifully complicated family; Dante the loyal Xolo dog; and the stunning worlds of both the dead and the living. Features also include deleted scenes, insightful filmmaker commentary, the music of Coco and more. 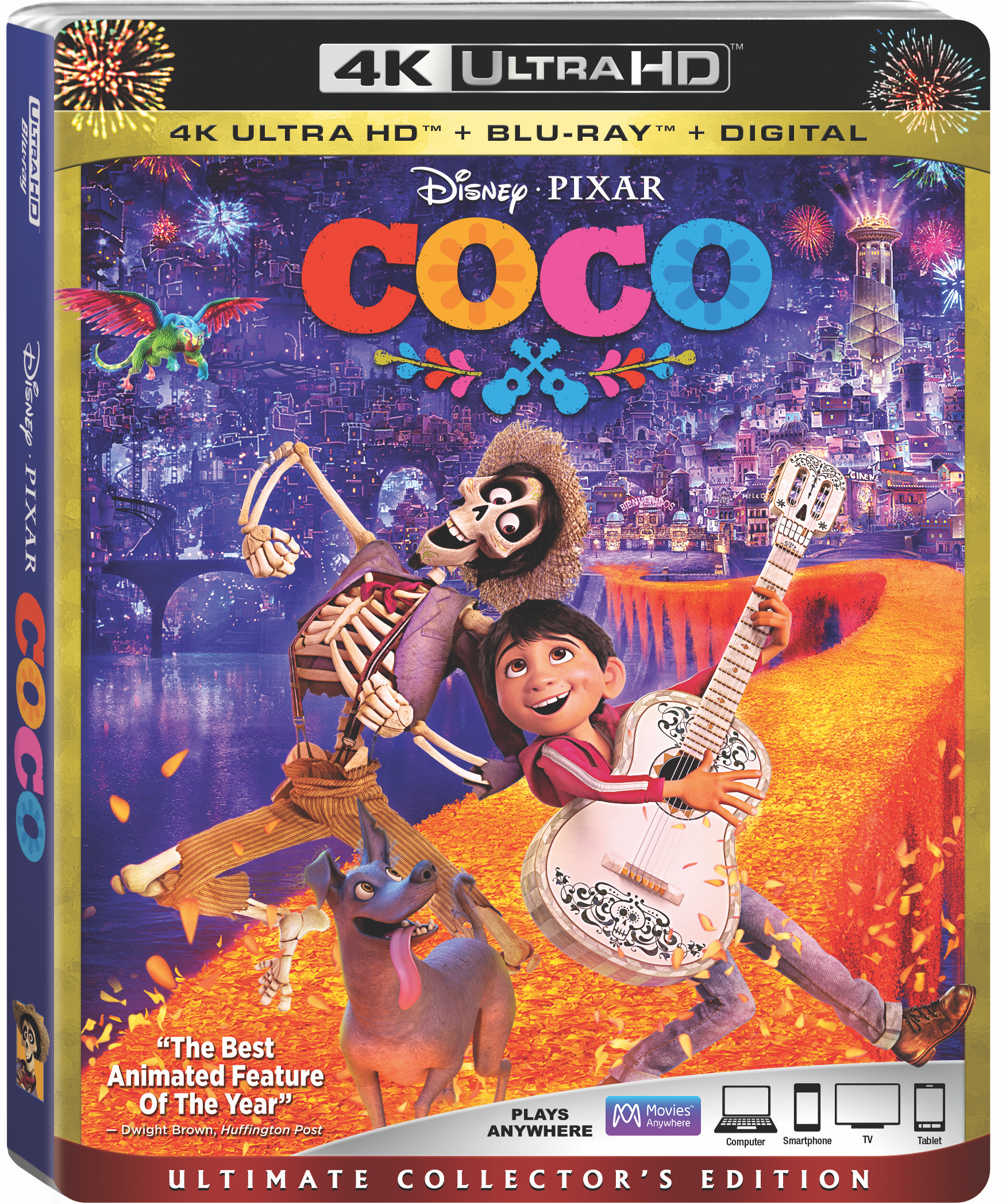 Now this vibrant tale filled with love and laughter arrives home Digitally in HD and 4K Ultra HD™ and on Movies Anywhere on Feb. 13, and on 4K Ultra HD,™ Blu-ray,™ DVD and On-Demand on Feb. 27.

In Disney•Pixar’s “Coco,” Pixar Animation Studios’ 19th feature film, Miguel (voice of newcomer Anthony Gonzalez) dreams of becoming an accomplished musician like his idol Ernesto de la Cruz (voice of Benjamin Bratt)—despite his family’s baffling generations-old ban on music. Desperate to prove his talent, Miguel finds himself in the stunning and colorful Land of the Dead following a mysterious chain of events. Along the way, he meets charming trickster Héctor (voice of Gael García Bernal), and together, they set off on an extraordinary journey to unlock the real story behind Miguel’s family history.

Even though Miguel’s family ban’s music, he knows that music is in his bones.  Miguel and his loyal companion, Dante, a goofy and lovable dog, embark on a magical journey to find his family through the power of music.  Miguel doesn’t give up!  He seizes the moment and doesn’t let anything get in his way.  If only we could be like him!

FAMILY REUNION – In Disney•Pixar’s “Coco,” aspiring musician Miguel (voice of Anthony Gonzalez) makes an impulsive choice that sets off a series of events that ultimately lands him in the Land of the Dead where he’s able to interact with his late family members, including Tía Rosita (voice of Selene Luna), Tía Victoria, Papá Julio (voice of Alfonso Arau), and Tío Oscar and Tío Felipe (both voiced by Herbert Siguenza). Disney•Pixar’s “Coco” opens in U.S. theaters on Nov. 22, 2017. ©2017 Disney•Pixar. All Rights Reserved.

The voice cast of “Coco” includes characters from the Land of the Living and the Land of the Dead. From the Land of the Living, Anthony Gonzalez (“Ice Box,” TNT’s “The Last Ship”) lends his voice to Miguel, Renée Victor (“Weeds,” “The Apostle”) provides the authoritative voice of Abuelita, and Jaime Camil (CW’s “Jane the Virgin,” Disney Junior’s “Elena of Avalor,” “The Secret Lives of Pets”) is the voice of Papá. Lombardo Boyar(“Happy Feet,” TNT’s “Murder in the First”) voices a town mariachi, and Ana Ofelia Murguía is the voice of Miguel’s cherished great-grandmother Mamá Coco. Sofía Espinosa (“Gloria”) provides the voice of Miguel’s loving Mamá, and Luis Valdez (“Which Way Is Up,” director “La Bamba” and “The Cisco Kid”) lends his voice to Tío Berto, Miguel’s hardworking uncle.

GIVE THE DOG A BONE — An unlikely star of Disney•Pixar’s “Coco,” Dante is a Xolo dog—short for Xoloitzcuintle—the national dog of Mexico. Nearly hairless and missing some teeth, Dante has trouble keeping his tongue in his mouth. But he’s a loyal companion to Miguel, an aspiring musician who hopes to follow in the footsteps of his idol Ernesto de la Cruz. Featuring the voice of newcomer Anthony Gonzalez as Miguel and Benjamin Bratt as de la Cruz, “Coco” opens in theaters Nov. 22, 2017. ©2017 Disney•Pixar. All Rights Reserved.

Here are some of our favorite scenes. The whole movie was so amazing and magical, I couldn’t pick just one.   We did love Dante- especially when he changes in the Land of the Dead.  He’s not only goofy but colorful!

Don’t miss any of the magic!  Be sure to follow Coco on Social Media!